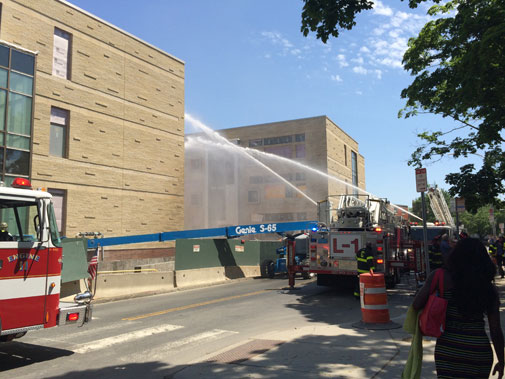 A fire Saturday at the Martin Luther King Jr. School was estimated to do $2.5 million in damage, officials said. (Photo: Kim Courtney)

Insurance will cover the costs of a weekend fire at construction for the Martin Luther King Jr. School, keeping project costs at no more than $95.5 million, said Lee Gianetti, the city’s director of communications and community relations, in a Monday email.

An investigation into the cause of the 100 Putnam Ave. fire is under way and should be done by the end of this week, but “the current rain pattern is slowing down the process,” Gianetti said.

Combustible roofing materials were suspected as being a cause, and the estimated $2.5 million in fire, smoke and water damage was focused on the roof and the third floor of the building – estimated in January as costing about $84.5 million, but with the expected price tag rising since.

Staff from the city and School Department, the architect and the construction contractor are assessing damage to the building and creating a recovery plan that keep a September opening on schedule, Gianetti said. The team is performing extensive tests of all building materials and finishes, and “progress is being made on keeping the project on track. New [heating and air conditioning] equipment and roofing materials have already been ordered and the construction company is evaluating the possibility of a double shift schedule to complete the work.”

Contractor Rich-Caulfield “has committed to having the MLK Jr. School open by September,” City Manager Richard C. Rossi said. “Although this is an unanticipated setback, I am confident that we have a strong team in place that will get the job done.”

“It will be difficult” to open on schedule, Rossi told city councillors at their Monday meeting, but the architect and construction team is “dedicated to making this happen.”

There will be no impact on the next school construction, at the King Open and Cambridge Street Upper Schools & Community Complex Project, Rossi said.

Because the city requires construction contractors to carry insurance, there will be no financial impact to the city for the fire damage, and “any materials and equipment that were damaged or compromised by fire, smoke or water will be replaced,” according to Gianetti’s email.

“I want to thank the Cambridge Fire Department for the exceptional job that they did in stopping this fire, particularly given the windy conditions. Their efforts prevented us from having a catastrophic outcome,” Rossi said.