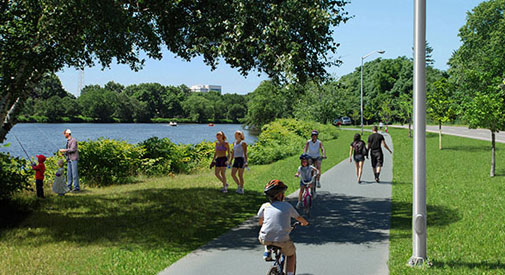 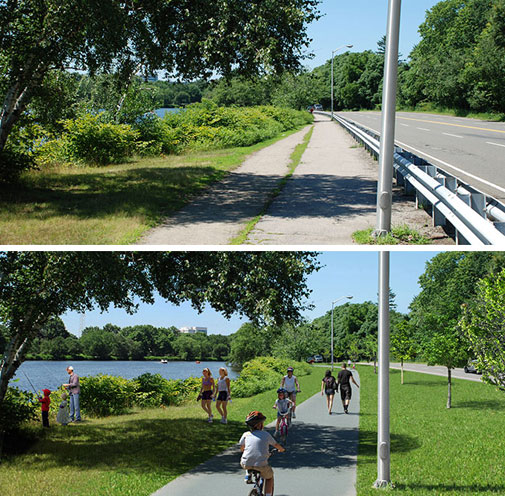 A before photo and rendering of expected results shows the potential of $1.4 million in improvements to Greenough Boulevard. (Image: Solomon Foundation)

Renewal of Cambridge parks by the Charles River is under way “in pockets,” but advocates wonder how to get broader revitalization and maintain the improvements given the current economic climate, said Cathie Zusy, chairwoman of the Magazine Beach Committee and  Cambridgeport Neighborhood Association.

“Funding remains an issue,” Zusy said in a recent note. “Plans for the 2024 Olympics may spur this renewal, but it should happen – must happen – regardless.”

Triathlon events are planned for Magazine Beach if the Boston 2024 committee is successful in bringing the Olympics to Massachusetts, and preparation and cleanup of the site has been described as part of winning public support. In addition, with the proposed rerouting of Interstate 90 for the Olympics, “we may have a new park across the river, providing a visual and auditory buffer from the MassPike,” Zusy said.

A discussion called “A Renaissance on the Cambridge Side of the Charles” is planned for Thursday to look at those issues, including examining models of successful public-private partnerships that can guide work in Cambridge.

The program is to include a welcome by state Rep. Jay Livingstone and a short history of the Charles River Basin by Charles Sullivan, executive director of the Cambridge Historical Commission, along with about an hour of question-and-answer time. Zusy gave more details in a press release:

While the Esplanade has long been the jewel on the Charles, the Cambridge river parklands, at long last, are beginning to receive their due. Hear the latest about North Point Park’s skate park and Magazine Beach and Greenough Boulevard improvements. Presenters from the Charles River Conservancy, Solomon Foundation, the Cambridgeport Neighborhood Association’s Magazine Beach Committee, state Department of Conservation and Recreation and the City of Cambridge will share current projects. A general discussion about best models for the public/private partnerships that have made these advances possible will follow.

Improvements at Greenough Boulevard, led by the Solomon Foundation, are expected to be finished this year using $500,000 raised by the foundation and $700,000 from the Department of Conservation and Recreation. But total costs are estimated at $1.4 million, according to foundation documents.

“A Renaissance on the Cambridge Side of the Charles” is scheduled to run from 6:30 to 8:30 p.m. Thursday at the Cambridge Main Library, 449 Broadway.