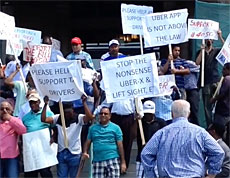 Cambridge Taxi owners and drivers were on strike Monday, protesting in front of City Hall and the License Commission. The taxi industry is upset that City Manager Richard C. Rossi, the commission, police and City Council are ignoring its pleas to fairly and equally apply and enforce existing taxi and livery laws against car services such as Uber and Lyft.

The city has allowed Uber and Lyft a special favor to operate without complying with laws requiring those companies and drivers to get hackney or livery licenses. It’s resulted in great harm to taxi owners, taxi drivers, livery drivers and the people of Cambridge.

Drivers must get licenses

City law defines a taxi (which it still calls “hackney”) as follows: “Every vehicle used … for the conveyance of persons for hire from any point of origin within the city to any other location.” Uber and Lyft pick up people within the city for a fee, and thus meet the definition of a “hackney.” Those businesses would also fall within the category of “livery” vehicles but for the inclusion in that section of a required “telephone call” to make pickup arrangements, another sign the law needs updating. The city ordinance requires hackneys to be licensed by the License Commission. Thus, Uber and Lyft are legal to operate in Cambridge as long as its drivers get a hackney license. Simple, right? So why is the city allowing Uber and Lyft to operate without any licenses at all?

City councillor Nadeem Mazen stated at the Monday taxi protest that the city’s official position is that Uber and Lyft are operating legally according to the city’s “interpretation” of the law. This is curious and disturbing for a number of reasons. First, the current law is clearly still in effect, because the city has been requiring, applying and enforcing it against other businesses for many years. Next, the language in city ordinances is clear and unambiguous, as is the legislative intent behind the law. The city can’t simply have a position contrary to the law as stated, then rely on that position as its “interpretation.” Finally, the city has no authority under its Plan E charter to pick and choose when to apply the law, which is in fact a violation of the ethical laws and may be subject to criminal penalties.

Mazen added that the state Legislature is “working on” laws that would apply to businesses such as Uber and Lyft, and the city is “waiting” for them to be passed. Proposed state legislation could take a very long time, and may never get passed. Moreover, that statement does not reconcile with the former, because if the city believes Uber and Lyft are operating legally, why is legislation needed?

The bottom line here is that regardless whether state legislation is in the works, the city has no authority to help a business avoid the law or refuse to apply a law while legislation is pending. If the City Council believes Uber and Lyft should be afforded the special treatment of not being required to get either hackney or livery licenses, the council should change the law through the public process. It takes only one day to amend the current taxi laws through a public council hearing, contrary to Mazen’s assertions to taxi drivers that nothing can be done immediately.

City councillors: There’s no time but the present to take action when Cambridge businesses are being harmed and suffering at the hands of the city. A council meeting is coming up next week, on Aug. 10.

Whatever changes are made to the law, if any, the city must take into consideration the fact that it created this false economy, in which medallions are limited and have value, and hackney licenses are also limited. Many medallion owners have spent more than $500,000 to buy and leverage them. Some could lose everything, including their homes, if their value plummets. The city not only has an ethical obligation to find a solution, but must operate within the system it created until it finds a solution.

This is not an isolated issue within the city. There are numerous state and local laws the City Council, city manager and various boards and commissions pick and choose when and how to apply. The License Commission and police are among the worst offenders. A glaring example of this is the refusal to enforce state liquor license laws against the owner of a bar and package store at 991 Massachusetts Ave. Both establishments have operated for many years with numerous serious liquor license law violations, of which the city is not only aware, but has confirmed and continues to endorse. The package store doesn’t even have a valid liquor license, yet is allowed to continue operating.

Technology such as the Uber phone app is great for consumers and brings forth a new era for the taxi market. There is no question that even if Uber and Lyft don’t survive, some other technology will pop up in the taxi industry. But the city must be very careful not to get too anxious and sloppy in adapting to new technology, undoubtedly an ongoing issue.

The city is engaging in a very dangerous game of picking and choosing when and how to apply and enforce the law, favoring some individuals and businesses over others – a very slippery slope that puts the governance of the city and its people at risk. If the council doesn’t like the existing law, its members should change it. In the meantime, the City Charter requires Rossi to “see that within the city the laws of the commonwealth and the ordinances … of the City Council are faithfully executed” and requires the council to “manage” and “control” the city manager if he fails in those duties.

People and businesses of Cambridge: Contact all nine city councillors at [email protected] and demand that they instruct Rossi to enforce the local and state laws, and that they take on the duties that councillors were elected to perform.

Kim Courtney is a lawyer and candidate for City Council.