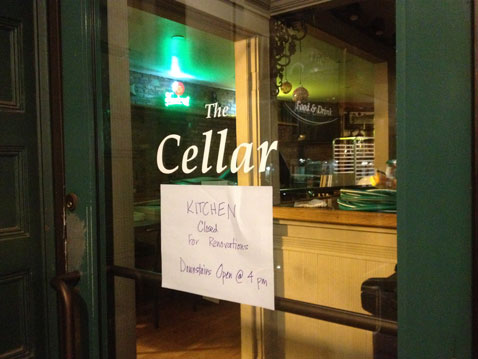 A sign at The Cellar at 991 Massachusetts Ave. announces Nov. 25 that it is closed during kitchen renovations. (Photo: Marc Levy)

The state has decided to let the city’s License Commission take care of a 10-year failure to enforce a state law, despite previously saying it shared jurisdiction and was “definitely looking into” irregularities surrounding the case.

State law says Kapsalis and his 100 percent-owned corporations can’t have both. Although he’s owned the restaurant liquor license since the early to mid-1980s, the city and state granted him the second, illegal license in 2005 and has inspected and renewed it every year since, even after he stood up in a March 18, 2014, meeting and announced to three city commissioners and their executive director and counsel, “I own 991 Mass. Ave. I’ve lived there since 1980. I own The Cellar. I own The Cellar Wine and Spirits.”

It is a year later, only after an anonymous letter arrived at the state Alcoholic Beverages Control Commission in January, that the city commission is taking action.

Kris C. Foster, newly arrived general counsel at the state agency, said the city commission has “authority to investigate” and that state law suggests the ABCC “shall endeavor to avoid duplicating similar investigations by local licensing authorities” – although with a Feb. 13 letter to Kapsalis demanding a transfer, the investigation seems over. The finding seems to argue that Kapsalis failed to “maintain compliance” with the law, which allows a transfer, rather than saying the license should never have been issued, which would require that his store license be revoked.

Chandra Allard, communications director for the State Treasury, said last week that the ABCC shared dual jurisdiction on the case with the commission and was investigating on its own whether revocation was the proper way to go. “We are definitely looking into it,” Allard said.

“There are times the local authorities don’t always address the law [properly] and we have to step in,” she said. But late Monday, the state had a different message: “This is a matter being handled by the Cambridge Licensing Commission, and any questions you have must be directed to them.”

The Feb. 13 License Commission letter said there would be a hearing about the case only if Kapsalis fails to provide written proof of a transfer by Friday, but on Monday chairwoman Andrea Spears Jackson clarified: “If Mr. Kapsalis submits an application to transfer his license, a hearing on the application will be subsequently scheduled.”

That raises the possibility of clearing up some of the mysteries from Kapsalis’ 2005 application for the liquor store license.

For instance: Kapsalis says in his March 1, 2005, license application that he already had a license; why wasn’t this examined by the commissioners and executive director – none still on the board save for Fire Chief Gerald Reardon, a commissioner since 2000 who signed off on the transfer? How did Kapsalis’ attorney, James Rafferty, judge him safe in the first place from state laws written to prevent “any person, firm or corporation” holding such licenses “on the same premises”? (Messages were left with Rafferty in the writing of this story, but they were not returned.) Why weren’t certain incorrect answers on the application questioned by commissioners who claimed to know Kapsalis well?

“We are very familiar with Mr. Kapsalis and Ms. Carter, so I think we know their background and experience,” said the commission’s chairman at the time, Richard V. Scali, referring to Kapsalis and the manager of his businesses, Marilyn Carter.

The application seems to have three inconsistencies when compared with testimony to the commission and documents kept in Kapsalis’ commission file.

The application asked whether the applicant owns the premises where the license will be used. Kapsalis marked “no,” but the city’s property database shows he has owned 991 Massachusetts Ave. since January 1981, and Rafferty told commissioners aloud that Kapsalis “actually owns the real estate” as well as lives there.

The application also asks if the applicant has been convicted of violating state, federal or military law; ABCC rules prevent liquor store licenses from being “issued to any applicant who has been convicted of a felony.” Kapsalis answered “no” and signed his name under penalty of perjury directly under where the application warns that “false information or failure to disclose are reasons to revoke a license.” But court records show he was convicted of a January 1986 violation against a rent control law, a conviction upheld in an October 1988 appeal. It was a complex case with several closely argued issues, but in the official record of the case, Kapsalis’ defense “stipulated that this was a second offense.”

There is an undated Cambridge Chronicle article about the case in the commission’s file on Kapsalis, wedged between other documents from the mid-1980s, describing a conviction for unlawful eviction in 1985 in which Kapsalis “waved a gun” at a tenant thinking “there was a burglar in the unit.” His attorney at the time, William Homans, called the conviction “a lot of crap” in the Chronicle article and said there would be an appeal.

Kapsalis, Carter and their current lawyer, Walter Sullivan, were contacted for comment, but did not reply. Sullivan served as chairman of the ABCC for four years ending in 2000.

The application also shows Kapsalis denying holding a previous license, but as Scali said of the license Kapsalis would be getting in the transfer from the University Wine Shop and owner Paul DeRuzzo, “you owned it previously, didn’t you, before Mr. DeRuzzo, so you are just going back to what you were before Mr. DeRuzzo owned it?”

“That’s right,” Rafferty said. Contacted last week, DeRuzzo said he didn’t remember if Kapsalis had the license before him. Current executive director Elizabeth Lint said recently that those records weren’t convenient; as of Sunday, Lint’s email auto-reply says she is “out of the office  for an extended period.”

More recently, questions have arisen over whether there have been properly handled kitchen renovations at the restaurant space Kapsalis owns at 991 Massachusetts Ave.

Chef Brandon Arms announced Nov. 22 the end of an eight-year agreement in which he and previously Will Gilson ran The Garden at The Cellar in Kapsalis’ building (while giving up all alcohol earnings). The restaurant was closed for around two weeks, with a sign on the restaurant’s door proclaiming: “Kitchen closed for renovations.”

Three separate commission rules and regulations say a restaurant’s closing and kitchen renovations need official approval, yet there are no documents in Kapsalis’ file at the commission about either. That should mean license “suspension, revocation, forfeiture or further conditions for breach of its conditions or regulations,” but the commission hasn’t made a move toward acting on enforcing those rules or regulations. It is also unclear how Kapsalis opened a new restaurant in the space with no record of permitting or licensing.

Carter filed a letter with the commission that seemed to explain what she described as a 12-day stretch with no kitchen: a problem with the sink and grease trap and a “deep cleaning of the kitchen” that led to Kapsalis’ bar offering free sandwiches from catering trays before eventually returning to a full menu by a new chef. City liquor law says “a licensed establishment which sells alcoholic beverages to be consumed on the premises must have a kitchen.”

A worker at The Cellar present during that period said the kitchen was closed for at least two weeks and possibly up to around 16 days, and that a new sink, dishwasher and lights were installed. “They did do renovations,” the worker said.

The council voted on a policy order Monday sponsored by Mayor David Maher and councillors Dennis Carlone, Nadeem Mazen and Marc McGovern to have the city manager review questions surrounding the commission hearing, but the order failed, 4-4-0. Those voting against were vice mayor Dennis Benzan and councillors Leland Cheung, E. Denise Simmons and Tim Toomey. Councillor Craig Kelley wasn’t at the meeting.

On March 3, City Manager Richard C. Rossi acknowledged his oversight role of the commission. “I am responsible for all their work,” he said.

Yet in documents provided to Cambridge Day, the city solicitor said March 6 that Rossi was opting to leave the resolution of the issue in the hands of the commission, where he felt “these matters are being handled appropriately.”

In explaining her vote, Simmons made it clear that she didn’t understand this.

The city manager, as I understand it, is looking at this matter. It’s in the right place. And I think he should continue to do this as he’s been doing it … this does not increase a response from the city manager when he already has this in front of him.

At the end of the meeting, Toomey took a procedural step that meant the vote can’t be reconsidered, despite Kelley’s absence. Only Carlone and Mazen voted to keep the possibility of reconsideration alive.

The vote against reconsideration hasn’t been used in several months. When asked why he’d suddenly resurrected it, Toomey said he wanted meetings to move more quickly.