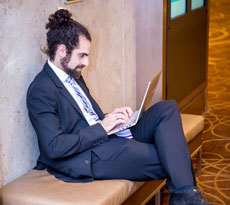 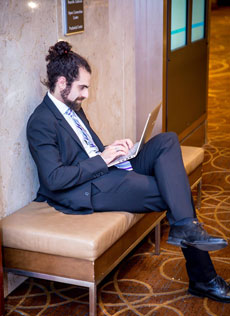 City councillor Nadeem Mazen at a June meeting of the Network of Arab-American Professionals of Boston. (Photo: TK Photographers)

There are press conferences planned for each city Thursday, with the local one set for 11 a.m. in front of Boston City Hall.

A prime complaint from opponents is that federal antiterrorism agencies are hosting invitation-only discussions about program development from which civil rights advocates and dissenting Muslim voices have been excluded, and aren’t sharing information with the public about how the programs will operate.

“It is deeply troubling that federal agencies continue to march forward with CVE program development while excluding dissent from the conversation,” said Mazen, also a member of the board of directors of the Council on American-Islamic Relations’ state chapter. “Transparency and accountability are values worth protecting in a free society.”

Mazen, the city’s first Muslim elected official, voted against the Cambridge police budget in committee with complaints about its militarization, although in June he voted in favor of the budget as a whole.

“Things have gotten out of hand,” Mazen said at the time, referring to the nationwide trend of military-level equipment sales to police via Homeland Security grants. “I’m very much concerned about the militarization of police forces nationwide and federal money being spent that way,” he said in March.

The American Civil Liberties Union of Massachusetts and Brennan Center for Justice at the New York University School of Law have watched the Countering Violent Extremism program with alarm, and hosted a November event at Harvard at which rights and terrorism experts said it relied on “debunked” theories about detecting future terrorists.

As explained in February by Shannon Erwin, of the ACLU and Muslim Justice League, a program planning document :

“… lauds a number of comparative CVE models in other countries, including in Saudi Arabia, a country hardly known for its respect for civil liberties and the rights of religious minorities. The guide then offers an instrument for use by police, educators, health professionals and other social service providers, empowering them to ‘rate’ you, your family and your community on a range of factors – such as ‘parent-child bonding’ and ‘perceived economic stress.’”

“Without any evidence to connect such ratings to ‘violent extremism,’ this non-scientific rating system then encourages these police officers, educators and other state actors to identify possible targets for ‘intervention’ by the government and other agencies,” Erwin wrote for WBUR. “Who among us would be comfortable having educators, local police or doctors rating our families based on their perceptions and then proposing ‘interventions’ based on our or our children’s potential to ‘radicalize’?”

A similar system called Prevent launched in the United Kingdom in 2007 “has actually reduced youth confidence in democracy,” Erwin said.

Congress is considering a bill by Texas Republican U.S. Rep. Michael McCaul to add $10 million in funding annually for a dedicated office within the Department of Homeland Security to coordinate CVE programs nationwide.

The bill passed unanimously by voice vote July 15 and has moved to the full House, McCaul’s office said.

As McCaul explained it:

“While ISIS and other jihadists groups continue to tailor their hateful and repressive ideology in order to appeal to and radicalize a younger generation within the United States and around the world … We must wage a more robust effort here at home to combat violent Islamist extremism by working with local communities to intervene when we see signs of it. As such, the CVE Grants Act will help state and local authorities by giving them the tools they need to root out the would be terrorist in our hometowns.”

Erwin called on police, elected officials and health and education professionals to “help us send a message that our cities cannot be testing grounds for dangerous, divisive CVE programs.”

This post took some material from a press release.