One of three superintendent finalists is out, saying next district leader has been chosen (update) 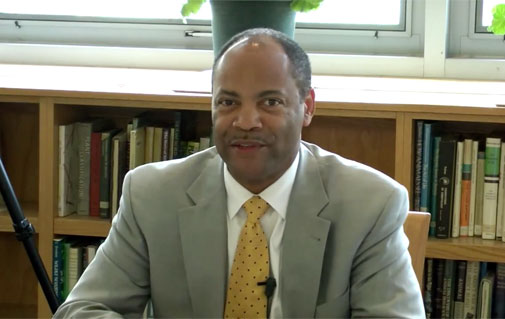 One of three superintendent finalists is out, saying next district leader has been chosen (update)

Stacy Scott was until Monday one of three finalists for Cambridge superintendent.

Stacy Scott, one of three finalists announced last week for the Cambridge superintendent position to begin next summer, announced he was no longer in the running, the Framingham Patch news site reported this morning.

“Cambridge has decided to go forward with another candidate,” Scott wrote in a statement to staff that was posted on the district’s website. “While it is not clear if I would have accepted an offer, Cambridge certainly posed a development challenge.”

Scott, along with Sergio Paez, a consultant to the Holyoke Schools, and Kenneth Salim, superintendent of the Weymouth Public Schools, were named as finalists in a search for the replacement for Jeffrey Young, who will leave in June. The search was launched in June of this year, with a final decision slated for the end of October.

The three finalists were announced last week and introduced to the community in a three-hour public forum Thursday. The next day, each had a 1.5-hour public interview with School Committee members. At that meeting, Mayor David Maher announced that the committee would likely convene to announce a finalist this week.

Despite Scott’s public announcement early Monday he was no longer being considered for the job, by late Monday the Cambridge School Department had issued no announcements about the finalists.

The firm hired to manage the search, Hazard, Young, Attea & Associates, included among its responsibilities identifying candidates and vetting them to see if they were suitable applicants. But questions began surfacing Monday about the quality of those inquiries.

Monday morning, on a Cambridge parents listserve, parents posted research on the three finalists, unaware a preferred final candidate might have been chosen. The findings included that Holyoke teachers protested Paez’s “excessive focus on test scores” and an alleged requirement by him that student scores be posted on “data walls” in classrooms.

Another parent contributed articles indicating that the Holyoke School Committee had found Paez wanting in his first review, and that Paez had issued a brief restraining order on a Holyoke teacher.

Two members of the superintendent search interview committee said they were not made aware of these allegations during their evaluation of candidates.

School Committee members could not be reached for comment on the record Monday, but Maher said after a 5.5-hour meeting of the City Council that a finalist had not been chosen. “I don’t know why he would say that,” Maher said.

He said he did not know if anyone from the School Committee or district had been in contact with Scott about his decision.

Update on Oct. 20, 2015: A statement sent on behalf of the School Committee by Barbara Allen, the district’s executive director for human resources, confirms that Scott was told he was no longer in the running for superintendent, and that School Committee members were part of the decision:

In context with individual and small-group debriefing conversations that were held between the HYA search consultants and School Committee members regarding perspectives of each candidate following these various events, HYA consultants indicated to Dr. Stacy Scott that the committee was narrowing its focus on the remaining candidates. Site visits are the next step in the process. The School Committee anticipates making a final selection decision next week as previously announced, after completion of the due diligence process which is currently underway.

In the July 1 meeting of the School Committee, firm president Hank Gmitro suggested that the site visit be done only for the “final preferred candidate” and said of doing “independent background checks” that they entailed a five- to seven-day process that “most districts” do only on the final candidate.

That outline suggests the due diligence scheduled for this week may be only on the preferred finalist candidate. At the end of the five-hour school committee interviews of the three finalists, the committee recessed briefly to a closed-door session, the possibility of which was included in the meeting’s announcement:

At the conclusion of the interviews, the School Committee may convene in executive session for the purpose of discussing strategy for contract negotiations with non-union personnel, including potential contract parameters for the superintendent contract.

HYA had cautioned the School Committee repeatedly that running a superintendent search so early in the school year could lead to difficulties.

In July, Gmitro advised the committee that its members should “maintain an openness that if you don’t find the right candidate by November, you shouldn’t settle” – and, in that case, should consider extending the search to find the best candidate.

“Many people who are considering a job change may not be thinking about it at the beginning of the school year,” Gmitro said, and a search early in the school year may yield fewer potential candidates.

“The job market has changed significantly” over the past few years, Gmitro warned. “Not nearly as many people are willing to take that job.”

One concerned parent, alarmed at the seeming lack of awareness among the search committee of some of the revelations, said, “I’m wondering about what else we don’t know that HYA didn’t find.”