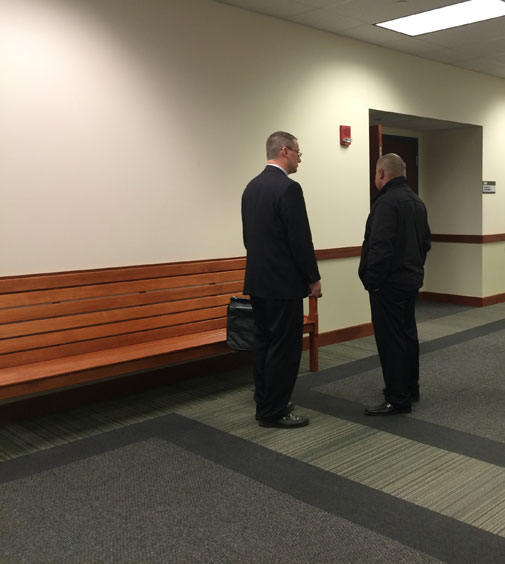 The forging of a petition presented to the License Commission was resolved Tuesday in Cambridge District Court, with Sydney DePaulo pleading guilty to 11 counts, netting a year of probation and more than $1,500 owed in fines and fees.

The 36-name petition was presented to the commission in March 2014 in opposition to a proposed wine bar and charcuterie called UpperWest. DePaulo, who has worked in real estate in Cambridge, told police he was paid between $300 and $500 for it by Steven Kapsalis, owner of a 991 Massachusetts Ave. bar, Cellar Wine & Spirits store and Garden at the Cellar restaurant space. Kapsalis has denied involvement.

“At first, Mr. DePaulo stated that the petition was authentic and that he never asked or checked the identification of persons signing it, but later admitted to forging only about five to six names,” according to a report by Cambridge Police Department Detective Kenneth Mui. In his investigation, Mui said the only name on the petition that could be confirmed was DePaulo’s own. In court Tuesday, DePaulo’s lawyer presented a letter from DePaulo’s landlord on Fayette Street saying his name was also legitimate.

The wine bar and charcuterie also faced opposition last year from a lawyer who mysteriously declined to identify her clients and from Kapsalis, who convinced commissioners that competition from UpperWest would hurt his business.

Kim Courtney and Xavier Dietrich, the partners who hoped to open the wine bar and charcuterie but were forced to withdraw their application for a pouring license, were in court Tuesday to explain the damage done by DePaulo’s fake petition. Courtney told the court she was “grossly offended” by the crime, costing her and Dietrich time and money, both in expenses toward opening UpperWest and in pursuing the case against DePaulo through the police and courts. In addition, the people of Cambridge were harmed by the fake petition, she said, because they “should be able to trust [their] documents.”

That theme was picked up by Assistant District Attorney Denise Duran, who prosecuted the case. “He perpetrated a fraud … offensive to the very nature of government,” Duran said. “We rely on petitions,” and actions such as DePaulo’s undermined faith in government institutions and could have a chilling effect on how people do business with them.

While Duran underlined the “conscious effort” behind faking the petition and DePaulo’s previous scrapes with the law, defense attorney Brian Palmucci painted the crime as a “lapse in judgment” of the employed, generally law-abiding father of a 9-year-old brought on by “zeal to take on a role in his community.”

Hearing that part of the requested punishment for his client was to stay away from the License Commission and Courtney and Dietrich – the counts include not just eight misdemeanor counts for forgery and one of uttering (trying to pass off a worthless document as genuine), but also two felony counts of witness intimidation – Palmucci said the penalty was inappropriate. He passed on a suggestion the case could have been settled “over a cup of coffee” and noted that UpperWest was technically to be founded by a limited liability corporation, not Courtney and Dietrich directly, and if you catch someone shoplifting at Walmart, “you don’t tell them to stay away from the [Walton] family.”

Duran rejected the argument. “There’s a difference between two small-business owners and the Walmart family,” she said.

The judge was also unconvinced.

“Forgery is a felony,” Sragow said. “These were originally Superior Court charges, where he would have faced much more serious repercussions.”

Courtney and Dietrich declined to comment on the case. Since their hostile treatment by the License Commission, they have watched it closely, criticized it fiercely and become increasingly involved in city politics, finally entering the race for City Council that will be decided Nov. 3. The chairwoman of the commission at the time of the UpperWest hearing resigned, leaving the post late last summer.

This post was updated Oct. 20, 2015, to reflect uncertainty from the Middlesex District Attorney’s Office about the level of criminal offense addressed in court Tuesday.