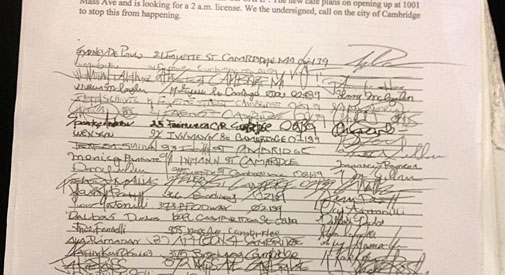 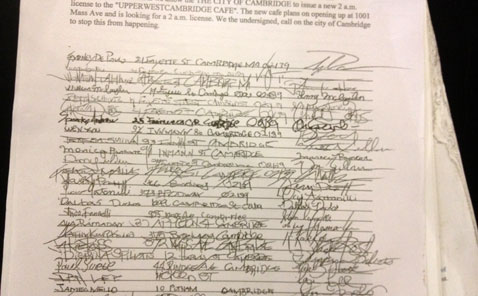 A Cambridge police detective could confirm only a single name on this petition filed last year with the Cambridge License Commission – that of its creator, Sydney DePaulo.

Standing in court for only a minute on April Fools Day, Sydney DePaulo didn’t say much, but the police report released that day speaks for him.

DePaulo is charged with forging names onto a petition against a proposed wine bar and charcuterie called UpperWest. The question has always been why he would do it.

He was paid to create a petition by Steven Kapsalis, owner of a 991 Massachusetts Ave. bar, Cellar Wine & Spirits store and Garden at the Cellar restaurant space, according to the Jan. 6 police report by Cambridge Police Department Detective Kenneth Mui.

“DePaulo stated that he is a realtor and was paid about $300 to $500 to create the petition by his client, Mr. Steven Kapsalis,” the police report says, recounting a Dec. 2 visit by Mui to DePaulo’s home on Fayette Street. “At first, Mr. DePaulo stated that the petition was authentic and that he never asked or checked the identification of persons signing it, but later admitted to forging only about five to six names.”

Mui, though, said he investigated each of the 36 names on the petition and could find only two that might be authentic: DePaulo’s own, and that of DePaulo’s landlord, whom Mui was “unsuccessful in contacting.”

Meeting with Mui on Dec. 4, Kapsalis told a different story.

“Kapsalis stated he never asked Mr. DePaulo to create any petition and that Mr. DePaulo is one of his realtors he has paid him for helping him rent some of his apartments,” the report says.

DePaulo has questionable motive to oppose UpperWest opening – last year he said it would lower property values, although as a local real estate agent he would know that is not true, and that he didn’t want his daughter to grow up near a 20-seat wine bar and charcuterie, although his home is more than a half-mile from the proposed Massachusetts Avenue location, midway up a solidly residential block.

Kapsalis, though, has told the same story to the detective as he told the License Commission last year: That, as a nearby competitor for restaurant and bar business, he opposed UpperWest “because they ‘don’t want to pay for a liquor license’” in a process accomplished by countless other restaurants recently throughout the city. Last spring he said UpperWest getting a license would be “directly hurting me.” The commissioners seemed to agree, with Fire Chief Gerald Reardon saying so explicitly.

In the police report, Kapsalis “reiterated that he is against the new bar,” Mui said, but “that any petition created by Sydney DePaulo was created by himself and without [Kapsalis’] knowledge.”

Messages were left Tuesday with Kapsalis and his attorney seeking comment.

Since helping keep UpperWest from opening last year, Kapsalis has been ordered by the License Commission to transfer a license it granted him illegally in 2005. A Feb. 13 letter from Elizabeth Lint, the commission’s executive director and counsel, told Kapsalis he must “take immediate steps to transfer ownership of one of the licenses” before March 20, because “failure to do so will result in a hearing to revoke one of the licenses.”

Since it was pointed out that state law says Lint’s order was incorrect, the commission changed its approach to the license transfer. A commission worker said Monday that Kapsalis will be on its April 28 agenda because a transfer “needs to have a hearing first.”

Kapsalis could also face questions about incorrect answers given on his application for that license – including convictions that could result in an immediate revocation of the license – as well as about how he opened a restaurant in the space he once leased to chef Brandon Arms and did kitchen renovations, all without licensing required of restaurants throughout the city. 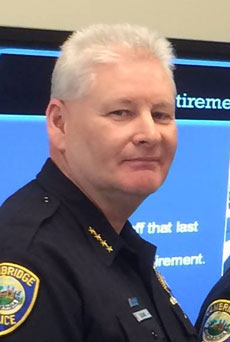 In documents made available to Cambridge Day, police Superintendent Christopher J. Burke said police “will not initiate action at this time with respect to any of these issues, pending initial investigation by the appropriate departments and/or agencies. It is also my understanding that the License Commission has already begun to takes steps to address some of these concerns.”

Burke addressed one question about Kapsalis’ application directly: “The response dealing with convictions or violations of any state, federal or military law, was found to be accurate as stated.” Requests to affirm that in the face of court documents and media reports went unanswered.

In looking at the other questionable application responses – saying he didn’t own 991 Massachusetts Ave. and had held no previous licenses – police “determined that there was inadequate proof that the applicant intentionally falsified the response,” Burke said.

Oddly enough, Burke also said there inadequate proof “that he even had a motive to do so.” The normal motive for falsifying an application response is to get an application approved when a correct answer would bring a rejection.

“Given these factors, no police incident report would be needed and no further action would be required on the part of the police department,” Burke said.

He also explained why DePaulo faces only three counts of forgery after a Cambridge police detective reported finding 34 falsified names: “To seek a criminal complaint, an officer needs to have a good-faith, legally sufficient basis to seek each charge. Detective Mui’s investigation revealed sufficient proof of only three forgeries,” Burke said. It is not clear how the number shrank to three when Mui’s report says DePaulo “admitted to forging … five to six names.”

Asked to clarify Burke’s findings, on Tuesday a police spokesman said simply that his letter “was accurate as written” and that follow-up questions should go to the city’s Law Department. A message was also left with DePaulo seeking comment.

The City Council considered briefly March 16 asking the city manager to look into irregularities at the License Commission, but the policy order failed by one vote, with councillor E. Denise Simmons saying she believed he was already investigating. “The city manager, as I understand it, is looking at this matter. It’s in the right place. And I think he should continue to do this as he’s been doing it,” she said. “This does not increase a response from the city manager when he already has this in front of him.”

That’s not the case, though. Like the police – whose commissioner, Robert C. Haas, is one-third of the License Commission, and sometimes has Burke sit in as a substitute – City Manager Richard C. Rossi has opted to leave the resolution of the issue in the hands of the commission. In the words of the city solicitor, that’s where he felt “these matters are being handled appropriately.”