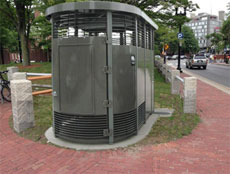 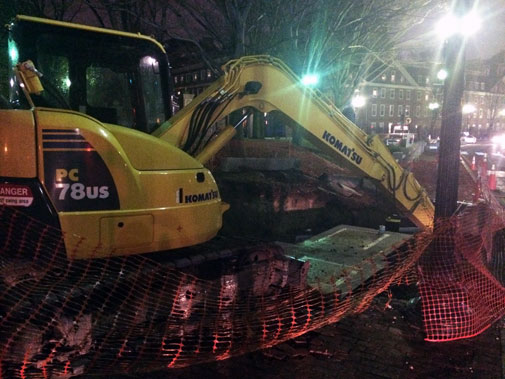 Construction is underway on General MacArthur Square, an island between the Old Burying Ground and Harvard Yard, where the city is placing its first permanent, freestanding, 24-hour public toilet. (Photo: Marc Levy)

Harvard Square’s public toilet is expected to be open for business by the end of November.

That promise may sound familiar – city officials said in April 2014 that the city’s first permanent, freestanding, 24-hour public toilet was expected to be in place by the end of that year too – but with sewer connections made Nov. 5 and the concrete foundation poured and setting this week, it also sounds solid.

The work toward a public toilet began at least as far back as 2003, but this installation is the result of renewed calls for public facilities in 2012.

“This is the first one we’ve done, and there has been some back and forth on details in terms of design … a lot of small things, and we had difficulties getting submittals in,” said Kathy Watkins, city engineer, explaining the delay in deadlines. “Harvard Square has challenging utilities. There were a lot of conflicts.”

Installation of a “Portland Loo” model toilet on General MacArthur Square, a small, V-shaped Harvard Square island between the Old Burying Ground and Harvard Yard, has been complicated by the proximity of the MBTA red line and other siting issues, Watkins said, but at this point it’s all come down to waiting for the concrete to cure and for Eversource to connect the toilet with the electric grid. “The one thing we don’t have control over is Eversource,” Watkins said.

When that utility is squared away and electrical power is supplied, there will still need to be some testing of the Loo, which has a flush toilet with a hand washing fixture on the outside.

Central Square was identified last year as the obvious place for a second public toilet, but it was really with the results of the spring’s participatory budget experiment that the plan took hold. More than 2,700 residents voted in the process that in the spring allocated more than a half-million dollars to six projects, down from the 380 ideas submitted in December. The toilet in Central Square was funded with $320,000 and was to be accompanied by a drinking fountain and signs pointing the public to other toilets in public buildings, such as City Hall, that can also be used by the public.

A city-organized working group in 2013 identified 44 toilets throughout the city that could be used by the public at various times of the day and week.

A 2013 survey answered by 716 people found that by far the greatest need for a public toilet was in Harvard Square (79 percent), with along the Charles River second (50 percent). Central Square tied with need for public toilets in all parks (40 percent). The next specific site for a toilet identified was Porter Square (25 percent).

Harvard is a test

Maryellen Carvello of the City Manager’s Office said last week that the earliest the public could expect to see a Central Square public toilet was in the early fall of 2016. “There have been ongoing meetings with multiple city departments and with the business association and neighborhood associations. There is a process that is going to have to be established to form a selection of the final location,” she said. “The bottom line is, I think we want to have the Harvard Square one installed for some time to make sure that we have it all right before the Central Square one is in place.”

The timeline was more or less confirmed by Watkins, and the reason behind the timing emphatically so.

“I want to see the Harvard Square loo in place first,” Watkins said. “We need to see how it operates and how much we need to change.” 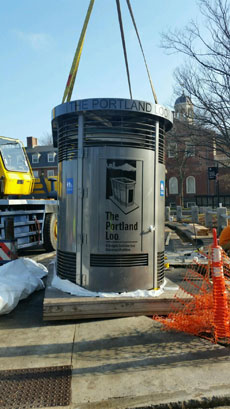 The city’s Portland Loo – identified by stickers that will be removed – is lowered into place near Harvard Square.(Photo: Kathy Watkins)

Update on Dec. 15, 2015: Watkins said Monday that further delays meant the Portland Loo – which has been delivered and bolted down – is expected to have its power and sewer connections in place and be ready for service on or about Jan. 5.

Update on Feb. 12, 2016: With the official unveiling today, it was announced the toilet would be ready for use by the public Tuesday.

Thank you to all who joined us to celebrate the completion of the Portland Loo in #CambMA! Opens to public on 2/16 pic.twitter.com/q3PDzKx0Fk