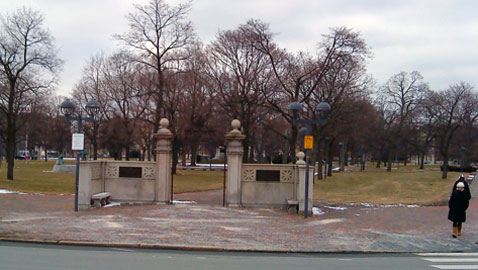 The Cambridge Common should keep its public restroom through renovations and beyond, city councillors said Monday. (Photo: CaribDigita)

A public restroom on the Cambridge Common should stay and the city should look at creating more such facilities, councillors said Monday.

The council approved a temporary restroom on the common several months ago. With it scheduled to close late this month, the City Council instead voted unanimously to ask the city manager to look into making it permanent, integrated with an already-approved common renovation project. It would benefit Cambridge’s homeless community and park users while simultaneously improving the city’s hygienic conditions, they said.

Members of the public also spoke in favor of permanent facilities.

“It seems to be right and fair that public bathrooms be available to people of all walks of life in all parts of the city,” said the Rev. Joseph Robinson, of Christ Church Cambridge, during public comment. “Their needs don’t change on the 30th of November.”

The Cambridge Common is a 16-acre historical landmark that houses a playground, youth soccer field and other recreational activity areas. According to the Community Development Department, an estimated 10,000 people pass through the park daily.

Mary Shannon Thomas who, like Robinson, works extensively with the homeless community, said a public restroom will benefit the entire Cambridge community.

“It’s in the city’s best interest, not just my clients’,” Thomas said. “A lot of our clients aren’t able to use a bathroom, which means that they find themselves using alleyways, corners of the T station and in the parks.” Thomas cited this as a major health concern for Cambridge. She said she believes a public restroom in the Common will improve the city’s hygienic conditions.

While councilors unanimously voted for the continuation of a restroom in the Common, Deputy City Manager, Richard C. Rossi, raised concerns about the facility’s cleanliness, security and aesthetic design. He also discussed issues of funding for the project, but said he plans to investigate options.

Regardless of the issues raised by Rossi, councilors agreed that the construction of more public restrooms is a major city need.

“It’s time to figure out a solution,” councillor Ken Reeves said. “I don’t think it’s just for the homeless. I think it’s good for everybody.”

The idea of a Bryant Park-style facility was discussed last night briefly — the surprisingly luxurious public bathroom in Manhattan that’s been called “the best public toilet in the world” — but councillor Minka vanBeuzekom said she thought the Portland Loo might be even better idea.