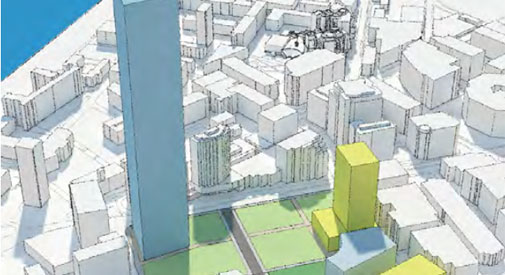 Could Kendall Square really get the tallest tower in New England?
By John Sanzone 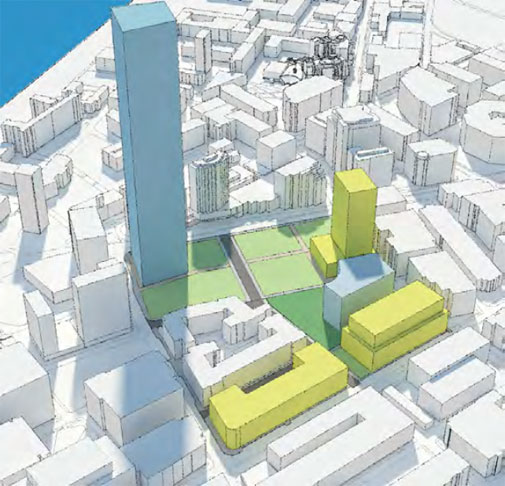 A packet of Community Development Department information on the Volpe site in Kendall Square included a model of a 1,000-foot tower.

Even supporters of increased height and density tend to brush off city councillor Leland Cheung’s floated idea of a 1,000-foot tower at the John A. Volpe National Transportation Center parcel in Kendall Square. I take it seriously, though, and I don’t believe I’m entirely alone.

The other major component that has been brushed aside is the restoration of the historic Broad Canal – which was partially filled in 1966 in preparation for the sprawling NASA center than never came to fruition – along with creating a wetland on part of a redeveloped Volpe parcel. This concept was featured in the winning submission to the Connect Kendall Square Open Space design competition, a vision for the neighborhood everyone should take a look at.

The vertical concentration of the tower serves that vision. The value capture includes not just more housing, but more fluid spaces, more open space and a chance to introduce ecological features.

Yes, the 1,000-foot tower will stand up and stick out and dwarf the Cambridge skyline – and that’s a good thing. It would be a statement and a beacon, drawing and welcoming humanity to Cambridge on its own merit and, by proxy, to everything else Cambridge is.

Why not pursue monumentalism for its own sake, with the bonus of all the benefits brought by concentrated density? I come at this partly from the perspective of a historic preservation advocate, beseeching us to keep the longer view in mind. It is part of our historic prerogative to build meaningfully; in many ways, it’s what this is all about, civilization – to muster the economics and will to maneuver the earth around our human story, to build marvelous structures and vibrant cities.

Obviously there are impacts to consider, including wind and shadow, but we minimize negative impacts by being thoroughly prescriptive: inclusionary zoning, open-space quantity and quality and establishing a site-specific design review process.

Here is a chance to act decisively on climate change, by bringing hundreds or thousands of people and families to live, work and experience life in a place that doesn’t have to be automobile-centric, that’s centered on the MBTA’s red line and in the heart of our regional metropolis. We can reshape the paradigm of mobility and urban space and place completely, with the power to influence urban redevelopment around the nation.

How do we make the 1,000-foot tower great and fulfill the promise of benefit to the community?

First, by prescribing the specific benefits.

Get interesting, world-class architecture throughout the site. We don’t have to take the “office park” approach that we already have grown out of gradually in Greater Kendall; the theoretical tower and the site generally can be architecturally creative. We can be deliberate with zoning language and mandate a site-specific special review process. Some of the world’s most brilliant design and architectural minds are two blocks away at the Massachusetts Institute of Technology and down the street at Harvard, and I would venture to guess they would be excited to be involved.

Anticipate physical effects by partly dictating geometry. Restrictions on floor plates could guide the architecture to a “pencil” shape, reducing the impact on sky and vista and minimizing wind tunnels and shadows.

Put transit, walking and biking first. Engineering this (or any) site for vehicle parking and vehicle trips is backward in our 21st century context. Design, form and human function should come first, and traffic engineering must be subordinate. This further allows the site to be inviting for all ages, abilities and socioeconomic statuses.

Set progressive inclusionary housing rules. We can demand an aggressive percentage of affordable housing at greater heights, such as 20 percent affordable residential units at 350 feet, 25 percent at 500 feet and so on. Additionally, if we minimize parking and driving square footage – which, again, we can, should and must – we free up significant value, creating better conditions for a higher number of costly affordable units.

Re-excavate the Broad Canal and create a wetland.

A scheme that generally aligns with the Community Development Department’s Urban Design Framework provides not just for the canal and wetland, providing ecology and open space, but: an iconic high-rise, mixed-use tower at Broadway and the Sixth Street Connector; a new high- or mid-rise Volpe Center; a “Biotech Champs-Elysées” mid-rise structure along Binney Street for office and lab or mixed-use space; a mid-rise residential to the northeast; a Kendall T stop and MIT access to the south; a plaza for open space and transportation at the southeast to relate with Kendall Square proper; and welcoming, usable and accessible open space in the middle.

The tower permits the site a certain cleanliness. This urban-ecological arrangement creates a special experience, which might even be an astonishing one of global interest.

If our goal is to maximize affordable housing, open space and sustainability, we should anticipate and welcome height and density at the Volpe parcel. A thousand feet, in one of the few places it’s possible, should not be shrugged off with an “of course that’s insane” or “it will never happen” or “who invited Donald Trump to the party?” I say that 1,000 should be embraced and moved toward in light of what is a truly unique opportunity and when we consider the serious demands of climate change and posterity.

John Sanzone is a Cambridge resident and real estate agent.