Burck’s plan is most distinguishable from the other three finalists by its extension of the Broad Canal to the west, into the 14-acre John A. Volpe National Transportation Center area, which is expected to see dramatic redevelopment in the next few years under the sponsorship of the federal government. 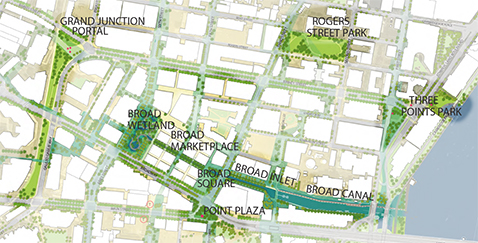 As the winner, the Burck team is expected to execute a $50,000 contract with the city for two months of work to further define the plan, and to incorporate the best elements of the three competing proposals in the final framework plan. All four final teams got a $50,000 honorarium from the city when they reached the final round of the competition. The city is expected to seek developer bids this year to implement three of the parks within the plan area, but many parts of the plan could take decades to be realized.

The finalists were evaluated by a competition jury, whose report summarizes members’ reasons for choosing a winner, as well as the elements from competing designs that it “hopes would be included” in the final plan.

Skip Burck, the group’s leader, said after winning that “we felt very good about what we did. The challenge, right up to the presentation, was how can we most clearly describe that. The report is dense. It takes a lot of work to get through it and understand the parts.”

The jury highlighted several elements of the Burck plan in its report:

The central spine created by the new constructed wetland, the extended canal and the effective connection to the waterfront will establish a powerful place where there is none: 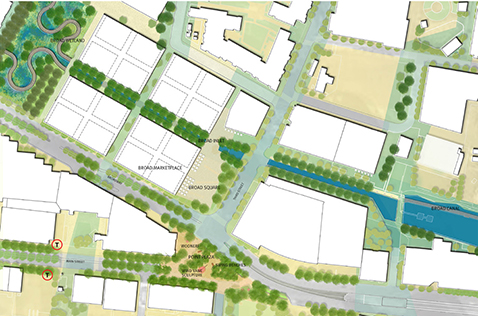 The placement of the constructed wetland had logic and gives purpose to the extension of the canal as integrated infrastructure: 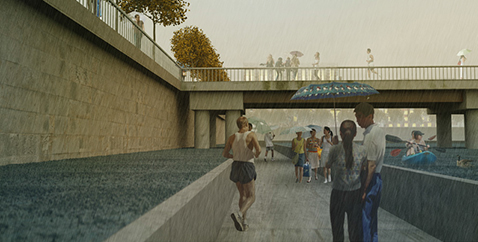 An appropriate level of landscape design was provided to give adequate direction for the future design of the parks: 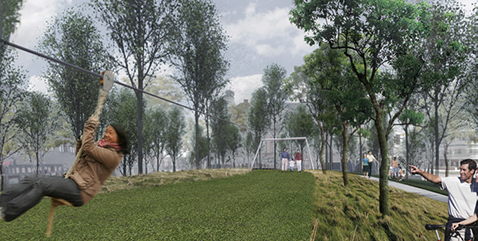 The strong evocation of landscape experience suggested through the schematic plans and perspective views of the component landscapes defines a powerful sense of identity for the framework as a whole:

The suggestion of consistent materials and construction details reinforces this effect. This is a framework that will not rely on special events or elaborate programming to establish an identity, but will accomplish this goal through unique and emotionally powerful experience of designed landscapes.

The schematic designs for the four parks establish a complementary range of places, facilities and experiences: 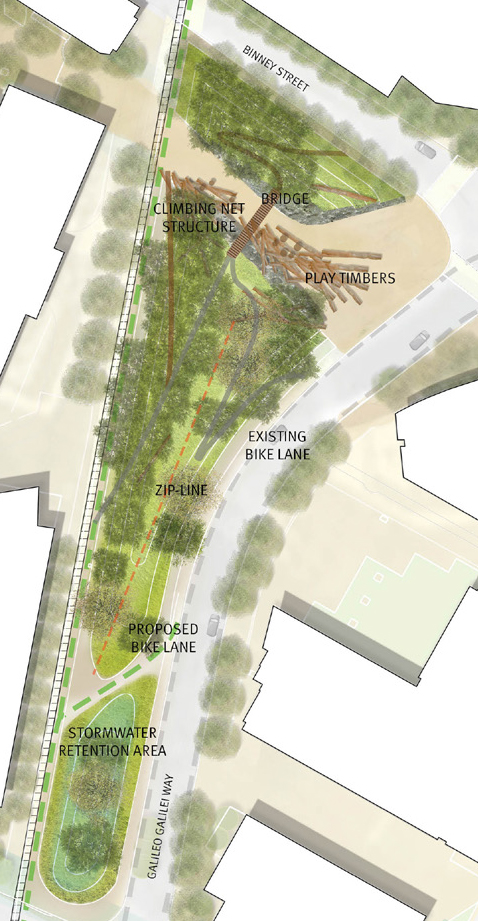 While the programming and activities of individual landscapes is evoked in the plans and perspectives, the overall programming of the framework components is suggested as flexible, even portable: 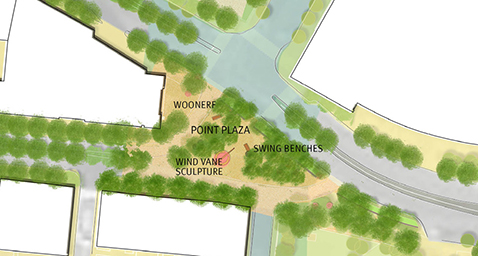 The innovative spatial analysis of current and proposed multi-modal connectivity created an integrated and legible street network between the four open spaces and a finer scale structure supporting a walkable urban environment: 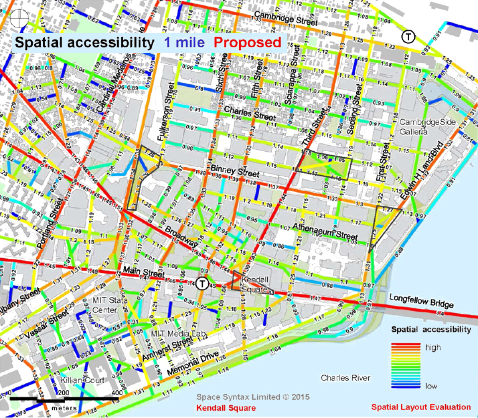 The approach to play distributes opportunities for play for all ages throughout the area: 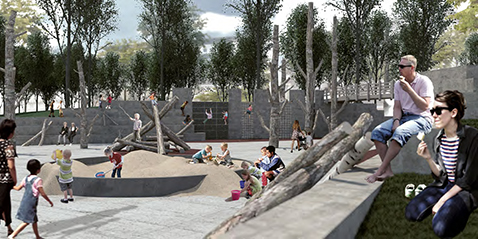 This proposal has the strongest and most fully elaborated ideas for public-private partnerships and development strategies of any in the competition. The flexibility of the “dendritic” model allows for the negotiation of various strategies for new development, the management of existing private-public spaces and the creation of advantageous new private-public spaces. The result is the description of an effective process and priorities in the evolution of partnership-driven development.

(What does the jury mean by “dendritic”? Burck overlays urban structures, storm water and pedestrian circulation “in an increasing concentrated way to the Charles River” in a kind of organic form the designer says “can be described as a ‘dendritic’ pattern overlaid on Kendall Square.” An overhead image suggesting what Burck means is below.) 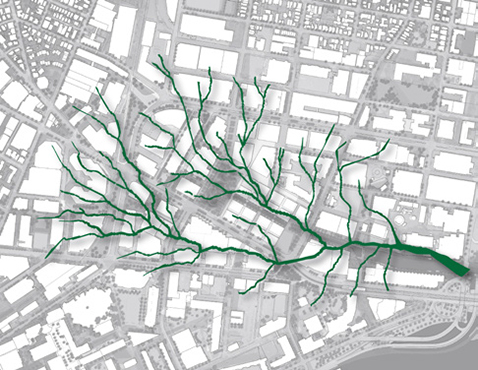 The core and dendritic paths are enlivened through strategic insertions of public arts, programming and/or interactive play elements. 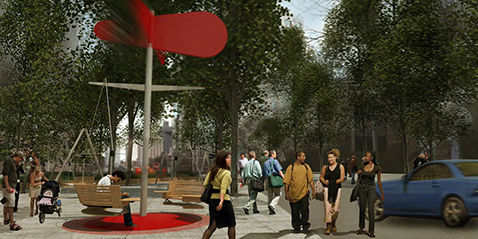 Elements from other teams

The jury highlighted nearly 20 elements from other teams its members would like to see included in the final plan. They include a proposal from Framework to consider a land swap of the block east of the Foundry Building with part of Rogers Park. Framework wrote in its plan: “Park space is much more effective with active edges. If the window of opportunity is still open, this trade gives valuable, visible outdoor space to the Foundry’s programs. It will bring ‘eyes on the park’ to Rogers Park.” The Foundry, an empty, 53,800-square-foot former manufacturing building on Rogers Street, is being developed by the city with a focus on science, technology, engineering, arts and mathematics programming. 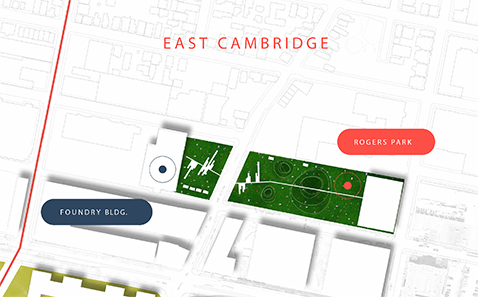 The jury recommended Van Valkenburgh’s proposal to convert an excess eastbound lane of Memorial Drive under the Longfellow Bridge into a pedestrian and bicycle way. Van Valkenburgh said that its traffic engineers found the lane to be mostly unused, so its removal would have a negligible effect on automobile traffic. 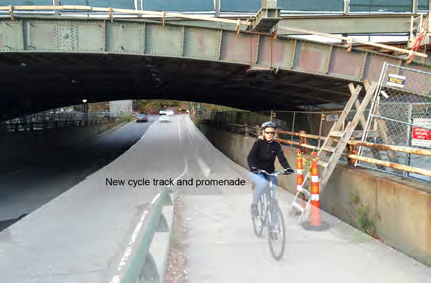 The jury also praised Sitelab’s activation and events strategies, and it highlighted Framework’s push to open up the Marriott hotel lobby to connect the MBTA stop with the Volpe center development. Framework, in its plan, “placed a high priority on creating a clear, well-marked and lighted arcade from the plaza through the ground floor of the hotel to Broadway. It should reflect the spirit of the passageway to MIT on the other side of the street,” it said.

The jury report made no mention of the proposed islands in the Charles River that several of the groups had incorporated into their proposals.

The Volpe site continues to be a crucial element of all of the Connect Kendall process, and the City Council and Planning Board are continuing to evaluate proposed rezoning for the site in anticipation of the federal government’s redevelopment. On Monday, the City Council met, accompanied by a presentation from the U.S. General Services Administration and another from the planning department. The Planning Board met Tuesday and covered the same issues in much greater depth. “It was great to actually talk planning and policy here,” Steve Cohen said. “We don’t get to do that often.”

The planners’ presentation took the four ConnectKendall finalists and produced diagrams of how the building heights in the Volpe parcel might look based on the zoning constraints, expected quantity of development and finalists’ positioning of open space. The finalists’ details of how the open space would be landscaped are omitted, and the building placement is hypothetical, but the building heights are a realistic example. This is the scenario shown for the winning team: 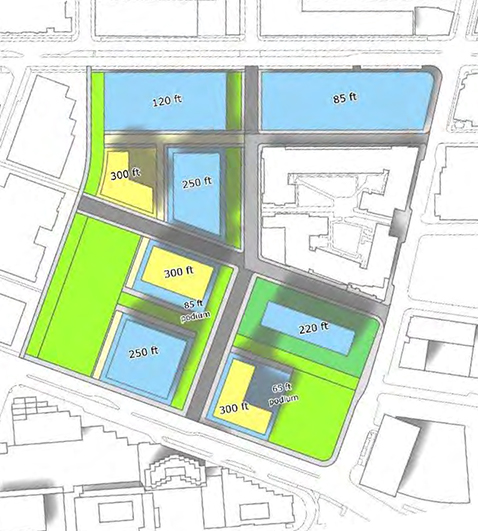 Burck said he anticipated that the new home of the government building would be the northwest corner of the Volpe parcel, and that the northeast buildings would be residential.

The Burck framework plan is available here (21 megabytes in size), and there are summary presentation posters here (18 megabytes).