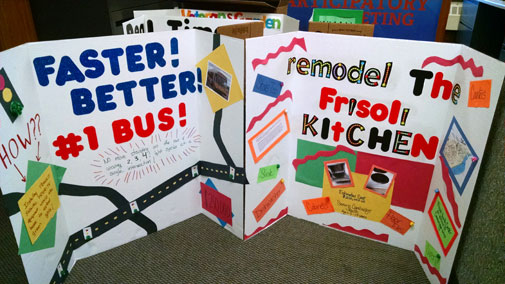 Funding for a green-light preference device for buses was among the most expensive proposed in this year’s round of participatory budgeting.

Some 4,184 residents voted this year in the city’s second round of participatory budgeting, which lets citizens direct $600,000 worth of the city’s overall fiscal year 2017 budget to projects they like – primarily in transportation, and primarily for bicycle safety.

This year the seven projects were led by a “Faster, Better No. 1 Bus for Cambridge,” which will use $250,000 to installing green-light preference devices on the No. 1 bus out of Central Square – the highest-cost item this year, and fully funded. The devices let buses keep a traffic light green longer to get through an intersection, or get it to turn green earlier, shrinking how long is spent waiting at a red and the time commuters spend getting to work or back home.

Behind it was “New Chairs for Cambridge Public Schools” for $102,000 (out of $190,000 requested), requested because the chairs at the high school and three upper schools are called “extremely small and uncomfortable” as well as aging badly and easily broken. The lower amount was given “to stay within the $600,000 allocated for this PB process,” said Michelle Monsegur, a city budget analyst, in the blog post announcing the winners.

Two bike transportation projects – “Make Massachusetts Avenue Safer for Bikers” adding shared-lane markings for bicycles as well as other signs and “Separate Bike Lanes from Traffic” – are the next most expensive projects at $70,000 and $50,000, respectively. A final bike project, “Shape Up Our Squares,” will paint green bike lanes at Massachusetts Avenue intersections in Central and Inman squares for $40,000.

Voting among residents age 12 and older ran from Dec 5-12, choosing from among 23 finalist proposals that were themselves chosen from more than 540 ideas submitted by residents in August.

The number of voters more than doubled from last year, with 78 percent voting online instead of on paper ballots.

“This has been a terrific civic process, full of so much community spirit,” City Manager Richard C. Rossi said in a press release. A message was left Monsegur seeking further comment.