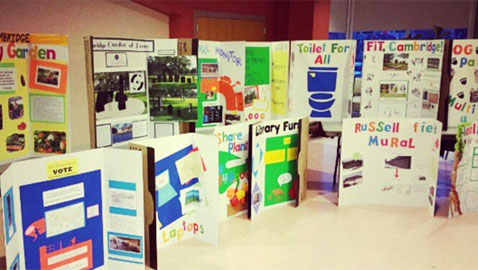 Participatory Budgeting projects are displayed Tuesday as the winners dividing the $500,000 in funding are announced. (Photo: Nadeem Mazen)

The results of Cambridge’s $500,000 experiment in participatory budgeting were announced Tuesday, with six projects announced as getting funded: free Wi-Fi in six outdoor spaces; a 24-hour access public toilet near Central Square; computer equipment for the Community Learning Center on Western Avenue; up to 350 bilingual books for children learning English; bike repair stations with tools and bike pumps to be installed around the city; and 100 new trees with educational signs.

More than 2,700 residents voted in the process, said Jeana Franconi, budget director for the city. Officials called the concept a success, and said it would return, and Franconi invited residents to a feedback session from 6 to 8 p.m. May 5 at the Citywide Senior Center, 806 Massachusetts Ave., Central Square.

Residents submitted more than 380 ideas for the first-ever Participatory Budgeting project experiment in December, and a 21-member volunteer steering committee and 40 volunteer budget delegates worked to narrow the submitted ideas to a final 20 options, including consulting with city staff to develop cost estimates, Franconi said.

The projects – which actually total $527,400 as proposed – will be evaluated through June and implemented starting in July, according to the process’ organizers.

“The process does not control what projects people vote for,” Franconi said, referring to the selections sending the total over the advertised half-million dollars. “It really will be on a year by year basis and the City will have to decide how much over the budgeted amount we are willing to fund.”

A week of voting started March 22, and the winners were announced Tuesday at the Senior Center.

The projects, ranked by cost: 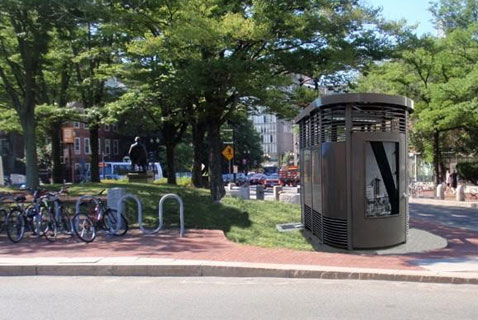 Toilet for all, costing $320,000, likely based on a design such as the Portland Loo, which is being used as the model for a city-funded public toilet being installed in Harvard Square. The toilet would be accompanied by a drinking fountain, according to the proposal, and include signs pointing the public to other toilets in public buildings such as City Hall that can also be used by the public. “Excellent proposal, but the city should view this as a public health issue,” said an online commenter identified as Thelma Rittenhouse. “One toilet doesn’t begin to make a difference.”

City Council candidate Jan Devereux agreed that she wanted to see a plan for public toilets citywide, while a commenter identified as David Neiman thought it was a “great idea” but hoped maintenance of the facility was included in the proposal. 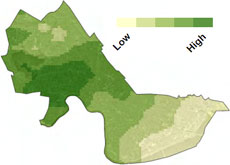 Healthy trees for a healthy cambridge, costing $119,400. Arguing that street trees cool the city, absorb pollution and make neighborhoods more livable, backers won enough votes to add 100 trees and tree wells to areas needing them most – the farthest east in Cambridge, the less rich the tree canopy, they say – along with two years of watering and signs with tree identification and care advice. At least 50 of the new trees will go near public or subsidized housing and in low-income neighborhoods, backers said. “This is something all cities should do,” supporter Nellie Baxandall said. 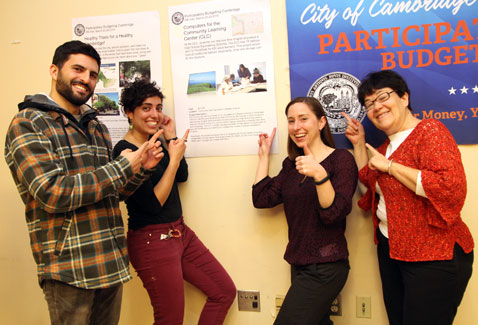 Computers for the Community Learning Center, costing $27,000. There are 630 students at the center trying to improve their English or pursue a high school equivalency diploma while competing for 18 laptops and 12 ThinkPads, project backers said. The funding would more than double that number, paying for 20 additional laptops, keyboards, mice and a storage cart. 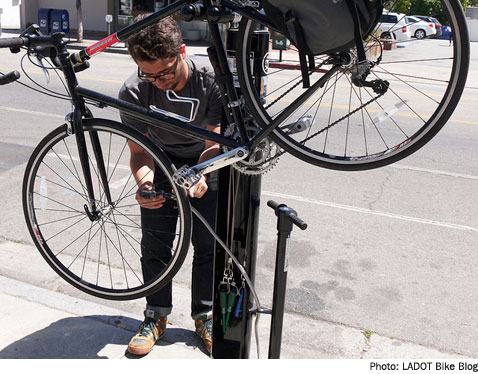 Bike repair stations, costing $12,000. Backers proposed eight locations including the Alewife T stop area, near Minuteman trail access; the Central Square branch library; East Cambridge’s Valente library branch, near Donnelly Field; Inman Square’s Vellucci Plaza; Fresh Pond Parkway at the entrance of the community building; in the Memorial Drive area, near Corporal Burns Park or the Riverside neighborhood park; at NorthPoint Park, near the playground or entrance; and Porter Square, across from the T stop on Somerville Ave. City councillor Nadeem Mazen said Tuesday there could be as many as a dozen of the repair stations, which cost around $1,500.

Bilingual books for children learning English, costing $7,000. Cambridge is a multilingual city with more than 32 percent of families speaking a language other than English at home, backers said, worrying that children of these families have limited access to bilingual books in their first languages – including Amharic, Haitian Creole, Bengali, Punjabi, Russian, Chinese and about 25 more.