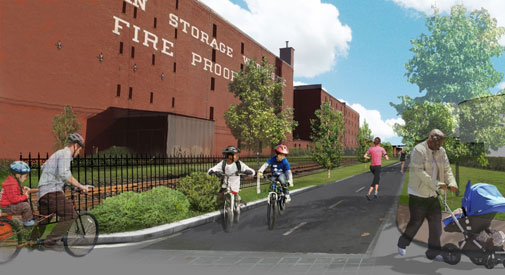 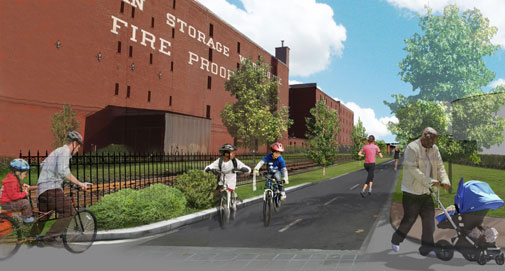 A Grand Junction Path could be a crucial non-motorized connector between Kendall Square and Allston for residents, workers and students. (Rendering: Nick Zimmerman)

Cambridge must take the lead and build the Grand Junction Path from Kendall Square to Allston. The two areas are growing rapidly and will not be connected by transit in the near future. The road network cannot handle current or future trips between the two neighborhoods, making a near-term construction of the Grand Junction Path from Central Square to Allston – arguably the most important section and yet the part that is absent in current plans – a desperately needed economic and environmental booster for the region.

Transportation needs in the Grand Junction corridor from Kendall to Allston are exploding: Kendall and Central Squares are together primed to add roughly 5 million square feet of commercial and residential space, and Harvard’s billion-dollar expansion in Allston continues. With no direct rail connection between the two high-tech hubs and no plans to build one, the Grand Junction Path will be a crucial non-motorized connector for residents, workers and students.

So far, plans for the complete path, which would run from Allston, through Central and Kendall squares and into Somerville, have revolved around a one-time complete construction of the non-motorized route along MBTA Diesel Multiple Unit train infrastructure from West Station to North Station – an “indigo line.”

The Massachusetts Bay Transit Authority’s latest expansion snafu, the green line extension, may be the final nail in the coffin for the indigo line and other near-term regional transit expansion. In a recent report, Harvard’s Charles Chieppo attributes the T’s current dilapidated state: “No single factor is more responsible than the system’s unrestrained growth over the past quarter-century.” Gov. Charlie Baker’s Management and Control Board agrees, promising allocation of scarce funding toward an MBTA “state of good repair,” not expansion. This leaves the aforementioned strategy for Grand Junction Path construction dead in the political water.

A near-term, tactical urbanism-style approach to the most important section of the path is possible, however. Here’s what it takes: asphalt, chain-link fences and some elbow grease – that’s it. Use the Cambridge Redevelopment Authority, put some pressure on the Massachusetts Institute of Technology (it already recommends that progress “would most logically be led by the City of Cambridge”), and lay basic asphalt from Massachusetts Avenue over the vacant bay on the Grand Junction bridge to connect to the Charles River paths.

To wait for the State to build the Grand Junction Path as part of the indigo line is to wait for a bureaucratic Godot. Yes, Allston’s West Station will likely be built, and yes, the Interstate-90 straightening project is moving forward. But neither project addresses the blossoming transportation needs between Allston and Kendall Square. The Grand Junction Path is a low-cost solution that will win economic benefits and reduce greenhouse gas emissions.

Waiting for the state to build the Grand Junction Path has so far proven a tragicomedy in infinite acts, and we are making the perfect the enemy of the very good. The city must be bold and take action to build a near-term Grand Junction Path connection from Kendall and Central squares to Allston.

Joseph Poirier is a Cantabrigian sustainable transportation advocate and city planning graduate student at the University of California at Berkeley.