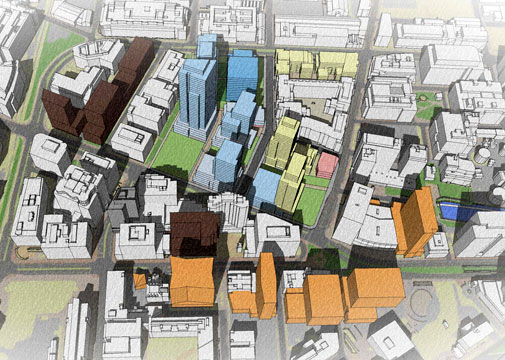 A city model of potential development in Kendall Square shows “MXD” additions in brown; those from MIT (already allowed by zoning) in orange; and federal Volpe Center changes in blue, yellow and pink. (Image: Suzannah Bigolin/CDD)

The City Council has advanced one of two zoning petitions that could substantially change Kendall Square – added to the MIT rezoning passed by the council two years ago, collectively they represent 5 million square feet of commercial and residential development.

The so-called MXD Zoning Petition from the Cambridge Redevelopment Authority would add 940,000 square feet to the developments known as Kendall Center (formerly Cambridge Center). The council passed it Monday to a second reading by vote of 6-3, meaning the petition could be adopted at its Dec. 21 meeting. Tim Toomey strongly advocated for more time to consider the petition, and was joined by Leland Cheung and Craig Kelley in voting against.

The East Cambridge Planning Team, a citizens group, voted Wednesday to oppose adoption of the petition. “The ECPT membership felt that more time is needed to study the cumulative impacts of MXD, MIT and Volpe,” said Peter Crawley, the group’s president. “ECPT is not in favor of rushing a vote at the last council meeting at the height of the holidays, when many residents cannot fairly engage in the process.”

The Dec. 28 council meeting has been canceled; the next meeting, Jan. 4, inaugurates a new council – all incumbents, with Jan Devereux replacing vice mayor Dennis Benzan.

The MXD is bounded by Main Street, Galileo Galilei Way, Binney Street and Broadway – with the exception of the federal government’s Volpe Center parcel, which the city is also considering zoning for but the council did not advance. The district is all built out, and there are no undeveloped lots; to make use of the additional development capacity, property owners would need to add height to existing buildings. 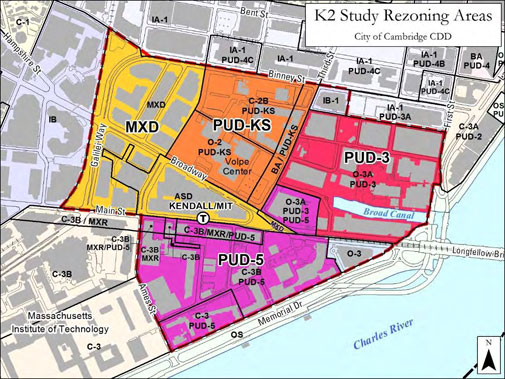 Nearly all the property in the district is owned by Boston Properties. The company intends to build on top of its Blue Garage (formerly the North Garage) between Broadway and Binney, as well as 325 Main St. (formerly 3 Cambridge Center), which houses the MIT Coop.

Adding development capacity to the MXD would also ensure the continued financial viability of the Cambridge Redevelopment Authority. As part of its historic role in the Kendall Square Urban Renewal, the agency gets fees from developers as additional square footage is built. The agency stands to get around $50 million as the 1 million additional square feet in the district is developed; it has no other significant source of income.

Before advancing the zoning petition, the council passed a series of amendments to the petition that had been discussed at hearings of the its Ordinance Committee. The amendments included those recommended by the CRA, which attempt to mandate a true 17 percent of residential square footage be devoted to affordable housing (compared with 11.5 percent of units elsewhere in the city); and to incentivize retail and small-business innovation space. They also included recommendations by the Planning Board to require starting residential development before all commercial development can be completed; remove a height bonus for residential development; require middle-income subsidized housing; and many small, technical changes.

Marc McGovern and Cheung said that they thought the district ought to be able to accommodate 20 percent low- and moderate-income affordable housing plus 5 percent middle-income housing, rather than the current 17 percent and 3 percent, respectively, in the petition. McGovern said he had met with Tom Evans, executive director of the CRA, and understood that the 17 percent could be amended to 18 percent. But McGovern held out for the full 20 percent plus 5 percent: “That’s what it’s going to take to swing me; so you’re gettin’ closer but you’re not there.”

The council did not consider an amendment to raise the affordable percentage to 20 from either 17 or 18, nor to raise the 3 percent to 5.

On Friday, the CRA posted new draft text on its website proposing 20 percent and the additional 5 percent subsidized housing as a discussion topic for its Dec. 16 meeting.

An additional factor is the already-permitted 88 Ames St. residential building that Boston Properties is building in the district across the street from the Broad Institute. Councillors have asked about the number of affordable housing units in the 280-unit building, and whether it would be 32, 36 or 42 units (11.5, 12.8 or 15 percent, respectively). Confusion has spread because the city’s planning department and Boston Properties have reduced the number of required units to 32 from 36. Councillors have asked the company to raise the number of affordable units at 88 Ames in exchange for passage of the MXD zoning.

At the council meeting, top city planner Iram Farooq said the company had committed in writing to providing 36 affordable units, “four units more than what is required by inclusionary calculation.” Farooq has not yet responded to a request to provide the affordable unit documentation.

Toomey’s objection to the MXD petition was more general: “When will residents have any input to the final version?” he asked. “On Dec. 22?” he questioned sarcastically.

Toomey said he believed residents deserved a “perfect plan” and that what the council had was not ready. “I just think it needs a lot more work,” he said, calling this as an example of the often-complained-of “last minute” zoning.

Nadeem Mazen, who voted in favor of the petition, said the CRA had produced nine-tenths of what the council had asked for in committee meetings, and that as long as they were making progress, it was “incumbent upon most or all of us to support the thing that we helped improve.”

But Mazen also said that he expected to see final changes before the Dec. 21 hearing, and not on that date at the last minute.

The council’s Ordinance Committee met twice recently, on Nov. 19 and Dec. 3, to consider the petition, which was originally filed in August. According to the City Clerk’s Office, the petition expires Dec. 22, requiring the council to act before that date unless it wishes to file the petition again.

But while that deadline reflects the city’s practice, a reading of the law suggests it is not required. The Massachusetts Zoning Act merely requires that petitions have a properly noticed public hearing in the 90 days before adoption. If the council and Planning Board had published notices of their second hearings in a newspaper, which they did not, the petition would have continued to be ripe for adoption through early February 2016.

Even if Dec. 22 passes without the petition being adopted, the council and Planning Board only need to schedule and advertise additional hearings to comply with the Zoning Act.

This post was updated shortly after publication to clarify percentages of low-, moderate- and middle-income housing in MXD discussions.