Green space has been added to a central space in NorthPoint in this proposal by Divco; the street network has been simplified, and some buildings are combined and smaller. (Image: Divco)

NorthPoint is getting mainly minor tweaks as responsibility for its development switches to DivcoWest after a $291 million purchase in August from Canyon Partners Real Estate. There’s one big change, and it’s not just big – it’s also green.

The new developer plans to combine more open space in the center of development, connected through a patch of small retail and restaurants, though the amount of open space in the 42 acres of former rail yard wasteland off East Cambridge would remain a total 11 acres. The larger patch of open space, called NorthPoint Common, would remain a grassy area used for passive enjoyment; the new open space could be more active, with a play area for kids, according to a presentation made Thursday to the East Cambridge Planning Team.

A play area could be added to open space in the center of NorthPoint. (Image: Divco)

The idea came from Cambridge landscape architect Chris Matthews, who is working with Divco on NorthPoint, said Tom Sullivan, president of the company’s development division. The company recognized it immediately as “a great idea … the site was begging for.”

The central park will be “a place where people want to be, that you frequent as part of your everyday lifestyle,” Sullivan said. “That also makes it a place where tenants want to be.”

The 18-hour retail within the common along First Street, the main entry to NorthPoint from East Cambridge by car, is planned to be kept light in part because “it’s not the economic engine here,” Sullivan said, describing the company’s focus being on “making a great place rather than on making a lot of [retail] money.”

Sullivan, claiming it was early days and there was little information, was reluctant to get too deep into issues dominating residents’ thinking: the fate of the Lechmere green line T stop and whether NorthPoint, and therefore East Cambridge, would get a full-fledged grocery store.

The Lechmere stop is to be moved into NorthPoint from its current East Cambridge location across Monsignor O’Brien Highway. Previous developers had grand plans for it, but more recently the station’s fate has been tied more closely to the languishing green line extension plan into Somerville and Medford. As the overall, seven-station project surged $1 billion over budget, expectations for the quality of the relocated Lechmere have been all but extinguished. History may repeat itself, as the current Lechmere was built as essentially a giant shed with turnstiles.

“It’s not under our control, [but] it’s important to our project,” Sullivan said of the station’s future. “We don’t know anything more than you do, but we’re doing everything we can to influence [the project toward resolution]. We have had a number of discussions with the MBTA.”

The company would be “very involved” in the area around the station, but not the station itself, Sullivan said. “We care what that’s like.” 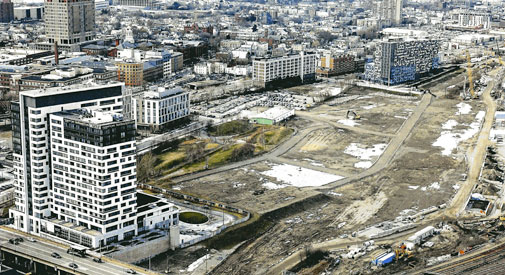 Much of NorthPoint has been cleared for construction. (Photo: Divco)

With an acknowledgement of a lack of connection between Lechmere and Kendall, the company is considering running its own shuttle, which potentially could be used by the general public as well as NorthPoint residents. The company is also ordering a larger than necessary pod from the Hubway bike-rental system, Sullivan said, which will go at the base of the Brian Murphy Memorial Staircase providing access to the Gilmore Bridge and Community College stop on the MBTA orange line.

The old station – likely with the historic shed maintained – is still on track to become a promised public market, and the tiny triangular parcel to be freed up across from the market is available for development as well. The East Cambridge Planning Team envisioned a 12-story hotel for the site in a plan from 2010, though on Thursday executive board member Alan Greene had a more modest idea: a diner.

The public market wouldn’t replace the need for a grocery store, though, and Sullivan said Divco was “nowhere near” committing to one, although the company is interested in a market of some size for NorthPoint, calling it “an important part of the mix that we see.”

In gearing up again for construction, Divco is proposing a plan that combines and shrinks some buildings as well as simplifies the street network, bringing the virtues of wider, straighter streets and shifting one off MBTA-owned land so work “can be done on our schedule” instead of when the state is ready, Sullivan said. Discussion of the changes will be brought to Somerville and Boston next.

Divco plans to start infrastructure work this year for the next three or four buildings, with installation of utilities eyed to begin in June or July and two years of heavy building construction starting in 2017, according to Sullivan and Divco spokeswoman for the project Pamela G. McDermott, of McDermott Ventures. 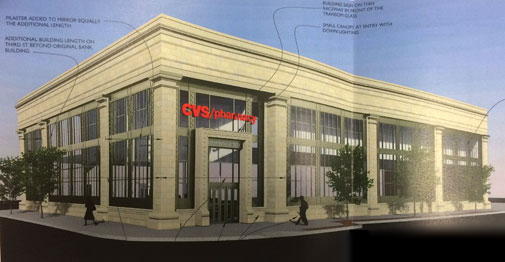 Also presented to the East Cambridge Planning Team on Thursday was a proposal to tear down a 99-year-old bank building, now holding a Citizens Bank branch, and build a 12,500-square-foot CVS with a full pharmacy and some groceries. Developer Robert Korff, who owns the building and surrounding property, said he approached the giant Rhode Island-based chain because he felt it was “a use the community would need.” It was too early to say whether it would be a 24-hour store, he said.

The rendering he displayed (above), which paid homage to the bank that would be torn down, “didn’t have to be the design,” he told audience members. “We’re here willing to work. The flexibility is there.”

But with a small CVS in the nearby CambridgeSide Galleria mall and a Rite-Aid pharmacy not too far away in the Twin Cities Plaza, reception to the idea ranged from muted to disapproving. Matthews said that in a dozen years of attending team meetings, “this is the project I like the least,” and Heather Hoffman said, “I really hate this idea. It is truly awful.”

Jacob Albert, a former Cambridge Historical Commission member, said he was sure the commission would act to preserve the bank building, and Tom Joyce said it would be “a shame to tear it down a few months before its 100th birthday.”

In addition to arguing for reuse of the building rather than a razing, audience members had counterproposals: a Whole Foods Market or Trader Joe’s.