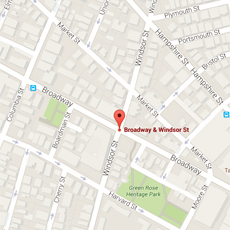 Only four days after the most recent report of shots fired, police are saying Sunday that they have recovered three blank shell casings after responding to a call and anonymous email tip at Windsor Street and Broadway in Central Square.

As in the Wednesday incident, there are no reported injuries or victims, Cambridge police said in an emailed alert. It is the fourth such incident this year, according to police records.

The caller and emailer separately reported hearing multiple shots and a vehicle driving away in contact with police at about 6:45 p.m., the email said. But no description of the vehicle or a possible suspect was provided, and an investigation is ongoing.

The city – along with Chelsea, Everett, Revere and Somerville – is in a two-year test of ShotSpotter technology that uses sensors to identify gunshots out of a city’s background noise. It was in paid for by a grant from the Department of Homeland Security filed through those communities’ Urban Areas Security Initiative group.

“In this case, ShotSpotter didn’t alert us. It requires the detection of three sensors for a notification. We have followed up with [the company] to better understand why three didn’t detect in this case,” said Jeremy Warnick, director of communications and media relations for Cambridge police.

On Wednesday, police responded to the reports of gunshots at 2:53 p.m. around Columbia and Pine streets near Clement G. Morgan Park in the neighborhood known as Area IV/The Port, finding shell casings that confirmed shots had been fired.

Before that, incidents included:

At 9:37 p.m. Feb. 22, when two blank shell casings were found near 225 Windsor St., also in the Area IV/The Port neighborhood, with no victim identified.

At 6:45 p.m. Feb. 2, a blank shell casing was found near 125 Harvard St., again in the Area IV/The Port neighborhood, with no victim identified.

Before that, the most recent such report was last year: June 7, near Donnelly Field in the Wellington-Harrington neighborhood neighboring to the north; also in 2015, gunshots were detected in Central Square just after 10:30 p.m. April 20 by the ShotSpotter technology.