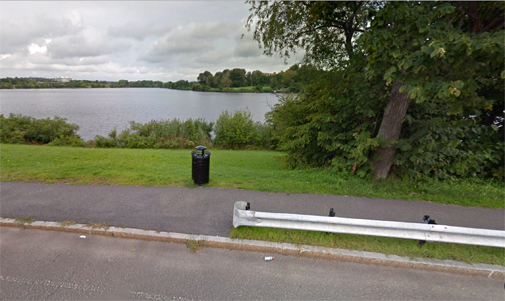 A man’s body was spotted along this stretch of Shore Drive in Somerville, authorities said. (Image: Google) 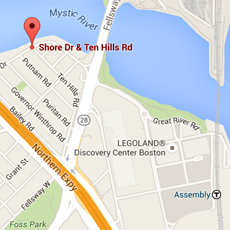 The body of a man was removed from the Mystic River in Somerville near the upscale Assembly Square entertainment district Tuesday evening, Middlesex County District Attorney Marian Ryan said.

Update on March 16, 2016: Authorities identified the body as being that of Kenneth Manning, 35, of Malden, a suspect in the murder of Colleen Russell, a 36-year-old Malden women, as well taking Russell’s car. Malden Chief of Police Kevin Molis said an arrest warrant was issued for Manning on Feb. 18, and he was last seen Feb. 16 in Somerville, where Russell’s car was found.

A passer-by reported seeing the body of a man in the river near Shore Drive and Ten Hills Road  at around 6:30 p.m.

State Police have since removed the body from the water.

“It appears that the body has been in the water for an extended period,” a representative for Ryan said in an email. “At this time the death is not considered suspicious.”

No more information would be available until a formal identification of the body had been made by the Office of the Chief Medical Examiner, the representative said.