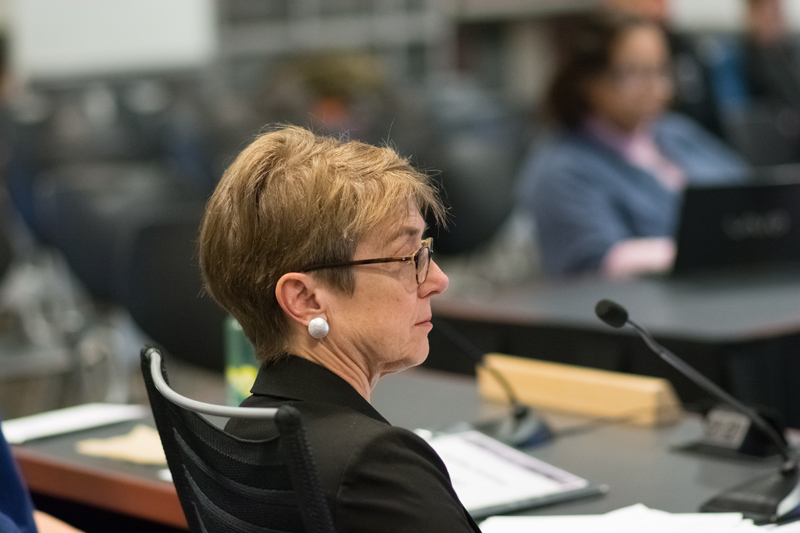 The School Committee passed a $172.8 million budget for the next school year at Tuesday night’s meeting, representing a 5.4 percent increase over the current budget. Though there were no votes against it and only slight changes from Superintendent Jeffrey Young’s proposed budget from March 15, which itself had few programmatic changes over the current year, getting to the 5-0-2 vote brought several contentious and messy moments.

By law, the annual budget vote has five roll calls – four for each “statutory” budget category, such as “salaries and benefits” or “travel and training,” and a final one confirming the total budget. On Tuesday the repeat votes triggered more drama in an already tense room. Member Emily Dexter’s name was at the top of the roll call, and she voted “very present” in the first round, followed by Richard Harding pointedly voting “very yes.” Patty Nolan joined Dexter in voting “present,” with the rest voting in favor.

Dexter had earlier explained that she would vote “present” because though she “supported the work and effort” in the process, she still had “too many questions about how the money is being spent.” She and Nolan each indicated during the meeting deep reservations that the budget did not address teacher concerns that there are not enough professionals in the classrooms; that the achievement gap between white and nonwhite students “has not changed at all,” with both drilling down on issues such as classroom size and staff support; and that the budget essentially continued the status quo.

At the fifth and final roll call on the full budget, Dexter repeated a “very present” vote. Fantini’s vote was next, and he paused before answering: “I just have to say that in 32 years I’ve never voted ‘present.’ I’ve always thought that the public needed a ‘yes’ or a ‘no’ and I’m going to continue that policy today. I’m voting yes.”

Harding continued the lecture: “I concur with Mr. Fantini. The public is owed a thing respectful to the position that you hold when you are elected. I’m voting ‘very yes.’”

At this point, Mayor E. Denise Simmons, presiding over the vote, interrupted, saying, “I’m going to ask that we just stick to the vote.”

Voting “present” is a legitimate vote – Robert’s Rules of Order, the guide for parliamentary procedure of public meetings used by the committee, lists the option for a member who “does not wish to vote,” and it is commonly recognized as a protest vote.

After budget subcommittee co-chairwoman Kathleen Kelly praised the soundness of the budget that closed the projected deficit without drastic cuts and “continued to build” in such areas as teacher quality and cultural competency, some members became visibly restless as Nolan started her comments with “I am torn.” She probed a couple of specifics in the budget, including class sizes in the high school and elementary schools and a continued lack of evaluation of existing programs, and a “50 percent reduction” in funding a position to do that evaluation.

Member Manikka Bowman argued that discussions around details of how staffing level and classroom sizes are determined is “not helpful to have in the middle of the budget process,” and said she would like to see those discussions happen before budget season.

Fantini then entered a motion to provide full-time art teachers for every elementary school starting next year, identifying funding for them from staff positions that may be unfilled for some or all of the next year. An email and public comment testimony was heard earlier from a district art teacher split between two schools who bemoaned his inability to build relationships and work with staff on enriching curriculum and argued that having part-time art staff in some schools is inequitable.

Fantini’s motion was followed by a 25-minute discussion, during which Chief Financial Officer Claire Spinner strongly cautioned against earmarking those “extra” funds because they regularly act as the budget’s only contingency funds (this year largely used up by increased special education costs); Dexter suggested instead making just the Cambridgeport School art teacher full time to support its project-based program (“much as we support [the Tobin Montessori School]’s program with extra aides”); Harding followed with suggesting deferring Fantini’s motion until the following year; Harding, Simmons, Nolan and Kelly argued that the extra $150,000 could be used for lots of other competing interests; Simmons wondered if it could be only partially funded; Dexter listed other parts of the budget that could be cut; and the superintendent reminded the committee that the way the district got to part-time art teachers is that giving each school, no matter its size, exactly one teacher is also inequitable – this time, to a larger school where the teacher has no excess time to enrich curriculum.

At one point Fantini made an impassioned plea for the importance of arts in education, and vowed that “if at the end of the next fiscal year we are $150,000 short I will personally go before the City Council with 500 people who believe in visual and performing arts in this community and we will get it,” but he eventually withdrew his motion. The committee voted unanimously to go with Harding’s alternate motion of funding one full-time art teacher in each elementary school for the 2017-18 year.

Things got hotter as Dexter began her discussion by reading prepared comments on the size of the district’s budget compared with student performance. (As soon as she started talking, several private side conversations began and Dexter said she would wait until people were paying attention.) “This budget is largely similar to the last budget,” she said. “We have a long, long way to go before we see anything like equitable test scores.” Dexter shared handouts comparing test scores among African-American and white Cambridge students, with stark indications of large and persistent gaps between them. Last year’s scores for all third- through 10th-graders showed that 55 percent of African-Americans were at or above proficiency, compared with 84 percent of white students, her data showed. The gaps were similar in elementary grade comparisons, and considerably worse in the upper schools.

Acting chairman Fantini kept interrupting Dexter with obvious irritation, asking, “Do you have a motion to bring in?”

“What’s the line item we are discussing in the budget right now?” Harding asked.

“I’m discussing the entire budget right now,” Dexter said. “Aren’t we having a discussion at this point?”

“Can you just bring in your motion right now, Ms. Dexter,” Fantini said, “because if no one seconds it, then the discussion comes to an end.”

Dexter refused and was allowed eventually to go on, although Fantini and Harding questioned her presentation of the data. Fantini interrupted to observe that Assistant Superintendent Jessica Huizenga had provided data showing improvement for African-American students. (Nolan countered that white students have been improving as much or more than African-American students, which would keep the gap roughly proportionate, an observation missing in district presentation of data.)

Dexter ended by advocating for an additional guidance counselor for the high school and two teachers for a first- or second-grade classroom as an experiment in co-teaching to see if it makes a difference in achievement. Nolan seconded it and discussion continued.

Having just finished trying to add 2.2 art teachers to the budget, Fantini lit into Dexter for trying to add positions. “I’ve been on the committee when [it’s] added a position here or there … and it’s a dangerous road to go down. We are heading into uncharted waters. I don’t want to be part of that,” Fantini said. “This last-minute stuff – even though I did a little of it myself, but I was totally flexible. I’m ready to vote on this budget now.”

The issue ultimately came to a rest with Bowman urging the committee not to make last-minute micro changes in the budget. “When I see these numbers, it literally makes me sick to my stomach,” she said, referring to the achievement gap data. “However, we have to be disciplined enough to think strategically about how we leverage our resources in a way that benefits all of our kids.”

Harding and Simmons agreed, with Simmons saying despite her sympathies for the spirit and intent of Dexter’s concerns, it is “grossly unfair” to ask for a vote on last-minute motions. She and Kelly pointed to ample opportunity for earlier input, with Kelly saying the budget process began unusually early this year and had more budget workshops for the committee.

The budget process this year began with a November hearing devoted to public comment, one of a few this year with visible drops in attendance from the previous year. An educators’ hearing, held for only the second time, had noticeably fewer speakers, with one teacher opining that many staff were unwilling to attend given pressure from administration not to speak publicly and waning confidence that their testimony has any impact. In the remaining budget-related meetings, there were crafting of broad budget guidelines, preliminary and draft budget presentations by district staff and question-and-answer sessions with staff members. Discussion among committee members usually meant a round robin of each members’ concerns with little if any give-and-take on specific proposals or issues.

The final step is a May 10 meeting with the City Council to present and discuss the budget, with a council vote hoped for. That City Hall meeting will include public comment.

In other business, the committee approved the acceptance of $500,000 from the city to cover a current-year budget deficit due to increased busing and special education services and $1.2 million in Title 1 government funds, including an increase of $5,000 for summer programs; revisions to the Rindge Avenue School of Technical Arts Program admission policy; and a $28,000 increase in a contract for autism-related services. A motion by Nolan to rename Columbus Day was moved to the civic unity subcommittee to await action on a similar motion by the City Council.