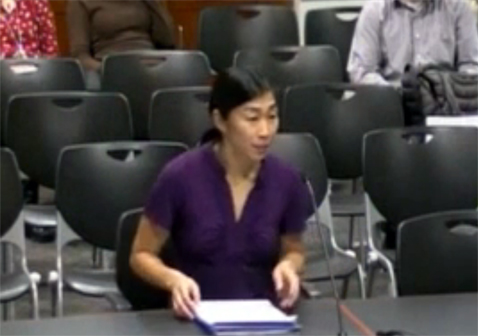 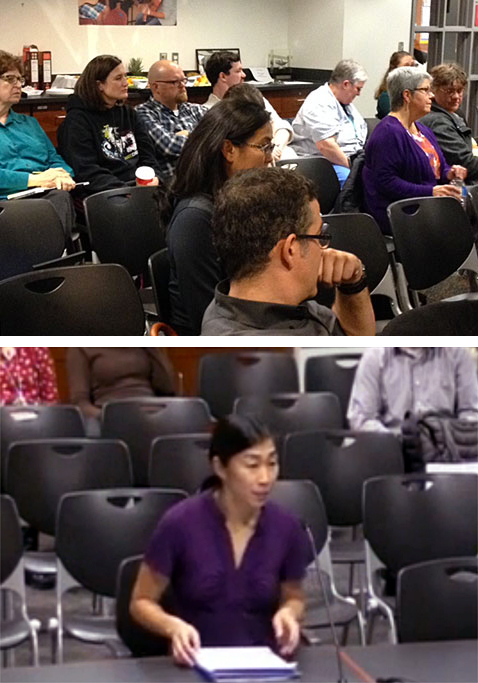 As Kathryn Fenneman, executive director of Tutoring Plus, commented Tuesday to the School Committee, bottom, it was clear numbers had dwindled since the previous request for budget input in December 2014.

Just over a year ago the School Committee did something unprecedented in inviting teachers and staff to speak at a budget hearing set aside just for them. More than 40 educators turned out with a clear and often impassioned message: They wanted “more hearts and hands” in the classroom, and a dramatic slowdown in assessments and new initiatives.

Since then, large groups of educators, sometimes armed with petitions or signs, sometimes presented by union leadership, appeared at hearings and public comment periods asking for more classroom support, help with addressing social-emotional behavior issues and family outreach, and decreased or even eliminated standardized assessments.

There was a more modest turnout at this week’s educators’ hearing for the school budget subcommittee, where 10 teachers spoke on a variety of issues.

Comments by David Albert, an instructional technology specialist at the Amigos School, suggested a possible reason for the more than 75 percent drop in participation:

“It is very, very hard to come here again and again to put forth the needs of our communities, our students and our families, only to see little change. While I am glad that for a second year the committee specifically asked to hear from staff, it is troubling for teachers to see what happens or at least appears to happen year after year, whether our input is requested or not – which is to say that, after we have been heard, life continues much the same. I hope this will be the year that something very different happens with these requests. This board has the power to make it so.”

Albert echoed comments from other teachers, many of whom have said it is “difficult” or “scary” to go on the record taking positions at odds with administration policy. Despite recent outpouring, there have been few staff adjustments, no upper school family liaisons (even when requested by the upper school principals), no programmatic decrease in professional development demands and no adjustments to assessments. In fact, despite two staff petitions and the committee’s own motion supporting a “halt” on implementation of PARCC standardized test assessments, in December the committee approved an eleventh-hour move by Superintendent Jeffrey Young to switch to those exams this spring.

Rose Levine, a teacher of fifth-graders at Graham & Parks School, saying she was “representing a growing number of educators across the district,” sounded a familiar note in identifying the biggest problem facing Cambridge the “culture of excessive assessment and accountability … We have narrowed the conversation to the point where our teachers, administrators and School Committee members spend most of our time talking about testing – and much of our budget funding it.” Arguing the need to reallocate Cambridge’s significant resources toward in-classroom teaching, she pointed to computer labs and technology specialists “tied up for weeks of the year administering assessments” and coaches and interventionists “spending half their time administering and writing assessments, then evaluating and interpreting data” instead of working one-on-one with students.

She also drew a direct line between increasing social-emotional issues among students and the “developmentally inappropriate and harmful” pressure from “over-testing” and “draining joy out of the classroom,” and asked that “before we institute yet another expensive new initiative to address these needs,” the district change its assessment culture.

There were other familiar pleas.

Mary Elizabeth Cranton, a Cambridge Street Upper School math teacher, said she agreed with everything Levine said and offered some concrete suggestions. Her class is one of the district’s co-taught classes in which a general education and a special education teacher are equal partners. “We see how much our scholars benefit from having the both of us in the classroom,” she said, and urged that this co-teaching model is necessary for full inclusion practices and “ideal for all classrooms.” Until that model can be universally implemented, she said, “we can at least get more assistant teachers in the classroom and build in real time for general education and special educators to plan classes together.” Cranton also argued for upper school family liaisons, using the Cambridge Rindge and Latin School model of school-day parent/teacher conferences and, like Levine, more access to existing technology (and better upkeep of often broken computers).

Eight-grade social studies teacher Jenny Chung, now at the Putnam Avenue Upper School, supported the idea of more co-teaching. “When it works, it is pretty amazing,” said Chung, who co-taught at the King K-8 school. She also noted the discontinuity for students to attend co-taught math classes as sixth-graders and in high school, but not in between; and she expressed concerns heard before that the separation of math students into different ability groups as seventh- and eighth-graders carries over for scheduling reasons into all subjects.

High school math teacher Ross Benson spoke in opposition to a preliminary proposal for a joint science, technology, engineering and math department made Jan. 26 by Assistant Superintendent Jessica Huizenga. “First, as a math teacher, I probably shouldn’t have heard about this from a Cambridge Day article. We math teachers should have been in on this from the very beginning.” While all for ending the “silo-ing” of departments, he said the pervasive testing requirements would need to be changed before broader project-based teaching could be implemented, because of the now-narrow curriculum directives. He also pointed out that “we don’t have technology or engineering departments,” and wryly recommended against calling a merged organization the “S&M department.”

Haggerty School music teacher Shelley Irvin-Kent advocated for an expanded Kodaly music program across all schools, and beyond second grade, where it stops at Haggerty. The four music classes each week provide critical equitable access to quality music education for everyone, she said, instead of having only some children able to take expensive private lessons, and promotes a deeper connection between families and schools through songs and concerts.

Tobin Montessori parent Jennifer Oberhauser (who came dressed as her alter ego, Jenny the Juggler, on her way to a performance, for which she charmingly apologized) supported the Kodaly advocacy, relating an anecdote in which songs from the class were the breakthrough for a reticent boy and his family to make a deeper connection to the school. Oberhauser also advocated for an expanded mindfulness program in the schools – a Buddhist-inspired movement that promotes awareness of one’s body and thoughts as well as self-calming. She said a proposal had been sent to the administration.

Betsy Preval, an English-language arts teacher of seventh-graders at the Cambridge Street Upper School (and formerly a paraprofessional), asked for more paraprofessionals to spend time in the classrooms. Without this assistance, there is “no ability to have small-group time in a 50-minute class” and check in with individuals to assess their understanding, or to have a conversation with kids who are going through tough times. She asked, “Are we supposed to say ‘I don’t have time to talk to you so I’m sending you to the office’?” – a pattern seen as creating further “educational gaps within the curriculum.”

Cambridge Educators Association vice president Jesse Kaplan, also a math teacher at the high school, asked for the return of instructional coaches to the high school. These coaches – teachers who spend part of their time mentoring colleagues – were eliminated in last year’s budget, as Principal Damon Smith argued their time was more urgently needed in the classroom. Kennedy-Longfellow librarian Susan Moynihan asked for a raise beyond the longstanding $5-per-student library budget

Kathryn Fenneman, executive director of Tutoring Plus, said she had been asked to submit both a level-funding and a 10 percent reduced-funding proposal to the administration. Saying that the organization serves more than 200 students a year on a “fiscally lean” $210,000 budget, she asked to keep at least the same level of funding next year.

Finally, Friends of CRLS director Elaine Schear and Friends of Cambridge Athletics director Larry Childs proposed a merger between the organizations. Their vision is to coordinate efforts and fundraising (while also eliminating public confusion), have greater long-term stability and “reflect, model and encourage increasing integration” that can provide broader support to groups and students. Schear gave an example of a student who got a FOCA athletics scholarship for college but needed more financial and educational support, which FOCRLS was able to give.