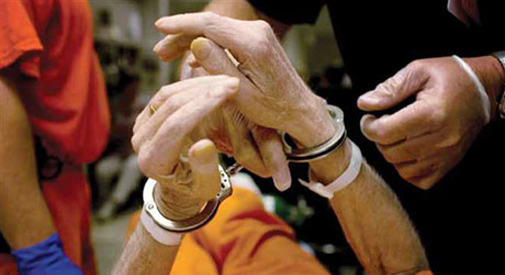 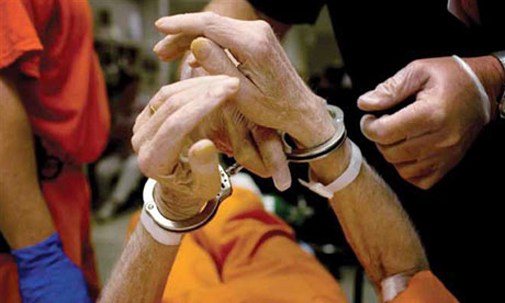 A prisoner is admitted to a hospital in 2012 for care beyond what his facility could provide. (Photo: Tim Gruber via the ACLU)

There is a fiscal crisis looming over Massachusetts’ state prisons and county jails. The inmate population is aging, and the cost of providing health care to older inmates, particularly those who are suffering from terminal ailments, is beginning to strain budgets. We incarcerate twice as many inmates over the age of 50 as we did in 2002, and this trend shows no signs of slowing. This is a problem that is shared in corrections systems across the country, but unlike most other states, our jails and prisons do not have access to the tools they need to deal with it.

Forty-five other states and the federal government have mechanisms for releasing dying prisoners in their custody to more medically appropriate environments. Massachusetts is one of the five states that do not have such a mechanism, and it is costing us dearly. Continuing to imprison dying inmates who no longer pose a danger to the public is pulling funds away from corrections initiatives that directly affect public safety, such as programming for inmates nearing release. Rising health care costs and an aging inmate population guarantee the situation will only continue to grow worse unless we take action now.

To address this problem, we filed legislation that would create a process for the Department of Corrections and County Sheriffs to begin placing terminally ill and permanently incapacitated prisoners who are no longer a threat to public safety in settings outside of state prisons and county jails. If passed, this bill would allow eligible inmates to begin receiving end-of-life care in facilities such as hospices and would transfer responsibility for care costs from the corrections system to public or private health insurers.

Since most inmates would be eligible for Medicaid upon release, this bill would generate significant cost savings for the state and county corrections systems. The same medical care could be paid for at a lower cost by Medicaid, and the state would also get significant federal reimbursement for the cost. Inmates could be monitored safely and securely in medical release settings through the use of GPS bracelets and home visits, rather than the multiple corrections officers that are currently required, further reducing the strain these inmates place on resources. Any threat to public safety under such a law would be highly remote – sheriffs and the Department of Corrections would have discretion over which inmates to refer to the program, and courts would have broad authority to set release restrictions. In the event an inmate’s medical condition unexpectedly improved or they violated the conditions of their release, they would be returned to custody.

While we feel the evidence leans heavily in this bill’s favor, obtaining a broad base of political support for this legislation remains a challenge. Some continue to hold the belief that inmates deserve little besides punishment, even if that punishment includes the indignity of dying in a prison cell. We readily understand and accept this anger, especially when it comes from victims of crime. But we have seen the inmates who would qualify for medical release under our bill. They are frail – often bedridden – with some suffering from advanced dementia. There is no rational purpose for continuing to expend resources to lock these men and women behind bars and razor wire, especially when every dollar we expend on their care is a dollar we cannot expend on preparing healthy, able-bodied men and women finishing their sentences to lead lives free of substance abuse and crime.

Right now, there is a clear commitment among members of the House and Senate to making smart criminal justice reforms. Just last week, Gov. Charlie Baker signed a repeal of the lengthy mandatory driver’s license suspensions and severe reinstatement fees that had long been imposed on drug offenders – even for those whose crimes did not involve a motor vehicle. Bills tackling issues such as mandatory minimum sentencing and the pretrial bail system have attracted dozens of co-sponsors, and there is a clear appetite on Beacon Hill to engage with these issues in a substantive and progressive manner. In this environment, we have a great opportunity to join 45 other states, the District of Columbia and the federal government by implementing a medical release system in Massachusetts. When looking at our options, it is one of the clearest, most rational choices we can make for our criminal justice system.

Tim Toomey is a lifelong Cantabrigian and a city councillor, serving since 1990, as well as being state representative for the 26th Middlesex District for Eastern portions of Somerville and Cambridge since 1992. Pat Jehlen is a Somerville resident and state senator representing the 2nd Middlesex District — including wards 9, 10, and 11 in Cambridge as well as all of Somerville and Medford and part of Winchester. She  served from 1976 to 1991 on the Somerville school committee, began in the state House of Representatives in 1991 and has been in the state Senate since 2006.