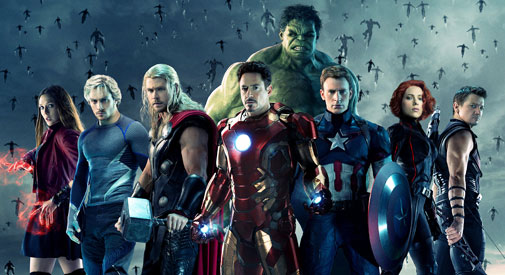 Marvel’s “Avengers: Age of Ultron” is a a big noisy actioner that storms into theaters this week to kick off the blockbuster season. It’s perfect summer fare: not too deep, with plenty of action and a dash of sexy; destined to make a killing at the box office and the merchandising table. But as far as owning the opening kick, “Ultron” is a bit late to the party – the equally noisy “Furious Seven” has been cleaning up for the past three weeks, and it’s a far more genuine and heartfelt affair even if stripped of the sentimental nostalgia built around tragically deceased star Paul Walker. 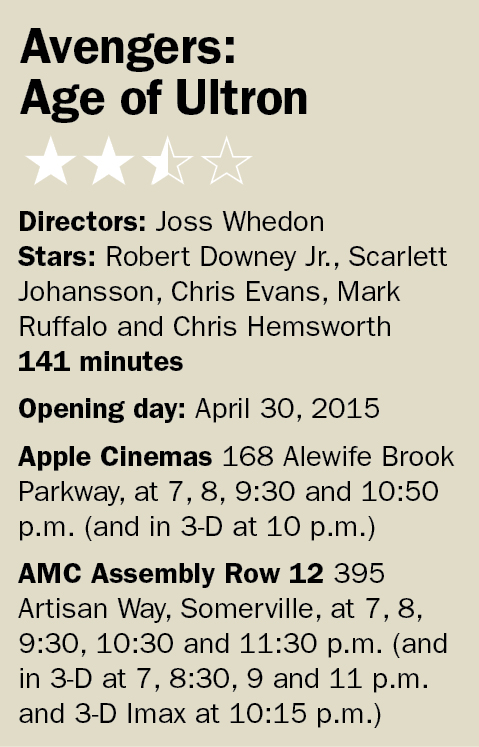 “Ultron” begins with a wham-bam as Captain America (Chris Evans), Iron Man (Robert Downey Jr.) the Hulk (Mark Ruffalo) and the whole Avenger cadre battle camouflage-veiled troops in a forest somewhere near what most recall as Transylvania. There’s a castle to storm and an “infinity stone” (six to rule the universe) to nab, but not without some resistance from an evil syndicate known as Hydra (something far less interesting and formidable than Spectre from the Bond series) in the form of a pair of embittered twins – the Scarlet Witch (Elizabeth Olsen) and Quicksilver (Aaron Taylor-Johnson) – who cause the motley crew of righteousness some lingering headaches.

The siege and bloody ebb and flow is all done with nimble, dizzying CGI effects. It’s like an amusement park ride: You can’t just focus on one thing, and if you do, the whole backdrop will have changed by the time you elect to pull back. Much of the plot is like that too. Just when you think you’re making sense of who or what Ultron is, Hawkeye (Jeremy Renner) lets on he’s got a wife and kids out in the cornfields of the midwest or the Black Widow (Scarlett Johansson) and Bruce Banner/Hulk start having life-partnering talks.

Johansson, already a star attraction with her fetching form firmly packed into snug-fitting black lycra, knocks it out of the park in this go-round with a husky, sultry coo while flirting with Banner. She’s one of the film’s few gems, along with that infinity stone that gets embedded into a synthetic uber-being played by staid and somber Paul Bettany, but that’s a whole ’nother plot thread that crops up and fades in the rear view, only to crop up again like so many things in this fate-of-mankind tempest where skilled thespians are reduced to such cerebral throwaways as “let’s do this” and tired maxims about being united as a team and righteousness. The deepest-reaching dialogue comes from Downey Jr.’s Tony Stark (Iron Man sans the iron), enumerating on a colleague’s comment about a long day, tagging it “Eugene O’Neill long.” It’s one of the few witty ah-has that sticks.

The soft, smarmy voice of James Spader goes a long way too, giving the metallic Ultron snark and personality beyond the muddled agenda writer-director Josh Whedon imbues him with. And Taylor-Johnson (“Kick-Ass” and “Nowhere Boy”), unrecognizable with an icy blonde shag, and Olsen (the focus of many egregious cleavage shots, perhaps to keep pace with Johansson?), who paired on last summer’s “Godzilla” reboot, make a decent go at an Eastern Bloc accent, but they’re mostly garnish is this whirling dervish of a film that tries to hit all the plot points so it can lay down the gauntlet.

There’s something to be had here, with such fine actors and seamless interlacing into a mega fantasy world, but overall the embarrassment of riches doesn’t quite pay dividends. Besides the burgeoning Black Widow-Banner romance, it’s a safe affair, only messy on the battlefield. “Home with Hawkeye,” “I Heart Hulk” or even “The Secret Life of Captain America” in which Cap lives a Bukowski-esque double-life, cussing, philandering and really bringing the hammer in backroom bar brawls (“X-Men” semi-covered this ground with Wolverine), may have elicited more investment. Still, the bang-bang blast ’em up does what it needs to do. If only the notion of heroics and flawed humans (and gods, monsters and other such supreme ilk) with much power (and responsibility) carried more weight than the thin parchment it was born on.