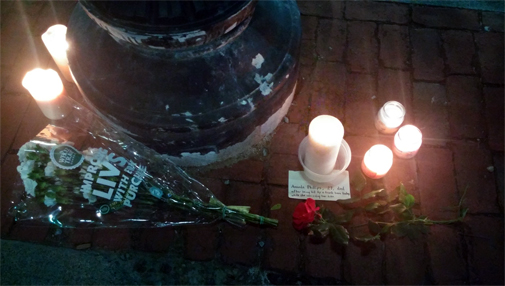 The start of a memorial for bicyclist Amanda Phillips in Inman Square is seen in a photo by Anson Stewart shared via Twitter. Click on the image to see the original tweet.

Thursday’s death of a bicyclist in Inman Square came exactly a month after the most recent request by city officials for a solution to tame its convoluted and dangerous traffic patterns.

The victim of the 12:17 p.m. Thursday incident was Amanda Phillips, 27, of Cambridge, a student at the Massachusetts General Hospital Institute of Health Professions and longtime barista at Diesel Cafe in Somerville’s Davis Square. She was forced into traffic when a car door opened ahead of her bicycle near Hampshire and Cambridge streets in Cambridge, where she was hit by a landscaping truck, Middlesex County District Attorney Marian Ryan and Cambridge Police Acting Commissioner Christopher Burke said.

She was taken to Massachusetts General Hospital, where she was later pronounced dead, the officials said.

It was a month earlier, at the May 23 meeting of the City Council, that councillor Tim Toomey introduced an order asking that the city manager confer with the Traffic, Parking & Transportation Department about “what steps can be taken to improve the safety of large trucks and minimize or prevent dangerous conflicts with bicyclist and pedestrians within the City of Cambridge.”

“It is horrendous. How people have not been killed is beyond me. The traffic flow between the pedestrians, bicyclists and the cars, it’s just not working,” said Toomey at the time, recounting a visit to the square and seeing cars trying to beat the light on a treacherous turn toward Lechmere amid “hundreds” of bicyclists and people walking. “These cars are coming right at them. I was amazed at what a mess it was.”

After Phillips’ death, councillor Jan Devereux filed a late policy order asking for work on Inman Square to be fast-tracked. She was joined by councillors Dennis Carlone and Nadeem Mazen. The order asks also to “establish a firm and accelerated timetable and budget for the installation of protected bike lanes on Hampshire and Cambridge Streets” and to educate people on the dangers of “dooring” bicyclists.

The order received a tacit endorsement from Toomey. “We all mourn the death of Amanda Phillips and we must all continue to address safety issues for bicyclists and pedestrians,” he said late Friday afternoon.

Other councillors agreed that the existing traffic pattern in Inman – part of the complication being simultaneous walk signals for pedestrians and green lights for cars – is “completely unacceptable,” in the words of vice mayor Marc McGovern.

In addition, councillor Craig Kelley wanted a report back on the use of “truck guards” installed since the March 2015 death of bicyclist Marcia Deihl, 65, a singer/songwriter and political activist, in a collision with a container truck near the Whole Foods Market in Cambridgeport. As of June 6, when the councillors got their response, state and Cambridge police were still awaiting a determination by the District Attorney’s Office on whether charges were warranted in Deihl’s death, but it was confirmed that large city-owned vehicles would be getting side guards and blind-spot mirrors.

A study of Inman Square safety and traffic issues begun a year ago and presented in a public meeting Wednesday showed that Cambridge Street, where Phillips had been bicycling, saw 18,840 vehicles a day, meeting another 11,540 from Hampshire Street – and intersecting with more from Antrim, Springfield and Inman streets. At 69 crashes in five years, including 15 involving bicycles and five involving pedestrians, the square exceeds the statewide average crash rate. But those crashes resulted in only 21 injuries and, until Thursday, no deaths.

A PDF version of a presentation on the study is here: 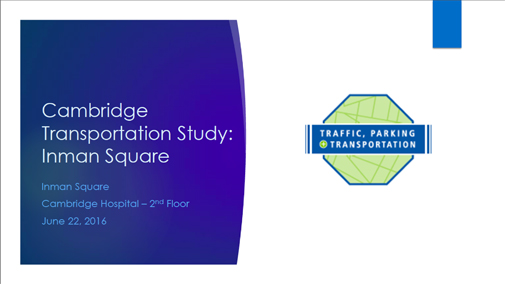 Design process in the fall

Suggestions to fix traffic patterns and improve safety by “bending” either Cambridge or Hampshire streets make up much of the study by Vanasse Hangen Brustlin, consultants in the transportation, real estate and energy fields with offices in Watertown. The next steps identified in the process were for community discussions, coordination with officials from nearby Somerville and the Cambridge Fire Department, which has a station in Inman Square, and identifying funding for the work.

Design efforts were to begin in the fall. Joseph Barr, director of the Traffic, Parking & Transportation Department responded  Friday when asked if Phillips’ death affected those plans, independent of what vote is taken on Devereux’s order.

“We have always been focused on both short- and long-term improvements to Inman Square,” Barr said. “The presentation is focused more on some concepts for reconfiguring the intersection [that] would take a little more time to design and implement. However, we are continuing to work on short-term safety improvements that can be implemented within the next three to six months, such as signal timing adjustments, crosswalk changes and improving visibility for all users.”

The Vanasse Hangen Brustlin study has been called at least the fourth intensive look at the square since 1994, but in the past large-scale fixes have been thwarted by its uniquely elongated X shape (bringing into play three side streets), which literally stretches out traffic patterns and muddles what should be simple simultaneous left-hand turns. “Because of the geometry,” city transportation experts had focused mainly on small tweaks to traffic patterns, such as the timing of signals and refining pavement markings, said Barr’s predecessor at the department, Susan Clippinger, in 2010. Barr was hired in March 2015. “Whenever we’re doing any kind of work nearby, we look to see if there’s anything we can do to improve it.”

Changes were also slow to come because, despite the chaos of the traffic patterns, there were so few accidents, injuries and deaths.

“I’ve seen some cars come very close. I see a lot of people almost get hit. I’ve never seen anyone get hit,” said Stephen Sousa, a teller at the square’s Cambridge Savings Bank branch, in 2010.

“Actually, there should be more accidents,” said a co-worker at the time, long before Inman Square’s luck ran out with Phillips as the victim. “but the drivers have been here and know how [its traffic] works.”

A small memorial of flowers, candles and a sign sprang up in Inman Square near the scene of the accident, and Diesel Cafe managers closed at 4 p.m. Friday to give Phillips’ co-workers and friends a chance to mourn. A statement on the cafe’s Facebook page announced the loss to the business’ extended community:

It is with unbearably heavy hearts that we say goodbye to our dear friend and co-worker Amanda, who left left this world too soon. Yesterday a tragic bicycle accident claimed an irreplaceable part of our collective hearts, as well as a person that was as genuine and kind as they come. The Diesel family mourns her loss. Please be gentle with each other and tell those that you love that you love them.

The late order, to be heard Monday by the council, also asks that a public plaza that could be created as part of the redesign of Inman Square be dedicated in Phillips’ memory.