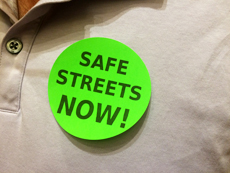 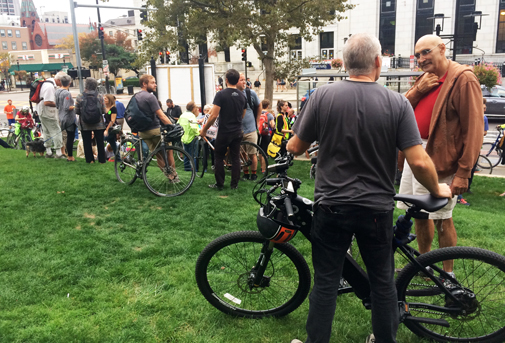 A sweeping set of street infrastructure reforms dominated Monday’s meeting of the City Council, inspired by two bicyclist deaths within the past four month.

The entire group of eight policy orders – combined into a single, more manageable order late in the process – was adopted by the council, including a request for the City Manager’s Office, city planners and police to work up specific steps “to prevent future bicycle accidents and fatalities from occurring, and to make our streets safer for bicyclists, motorists and pedestrians” and another wide-ranging request for a task force to put into effect the March vote for “Vision Zero” planning, engineering streets for zero traffic deaths.

Residents at the rally were given “Safe streets now!” stickers.

The councillors also want to know what power the city has to keep “oversized trucks” off more streets during more hours.

A 27-year-old rider was killed June 23 in Inman Square by riding into an open car door and being flung into the path of a landscaping truck; a 60-year-old was killed Oct. 5 in Porter Square in a crash with an 18-wheeled truck.

More than two dozen speakers filled nearly two hours of public comment with endorsements of swift action for the reforms, with many revealing their own fears of cycling in Cambridge or having to keep their children from riding streets with a number of recent bike deaths. At least two speakers made it through their statements with voices quavering and on the verge of tears as they contemplated hurting or killing their own toddlers on city streets.

Their numbers were boosted by a rally held at City Hall just before the start of the meeting that drew dozens of riders for chants and conversation with councillors heading inside. The crush of speakers stirred Mayor E. Denise Simmons to move debate over the eight policy orders forward on the agenda, and for unanimous support even from councillors who might otherwise have hesitated.

“I’m not the biggest fan of policy orders dictating [complicated city policy], but I’m going to support all of these tonight,” councillor David Maher said. “I know the city has a wound in it right now.”

The councillor perhaps longest and most associated with bike issues in the city, Craig Kelley, was even unsure if all of the proposals could be legally implemented, given the mix of state and other laws complicating Cambridge streets, but he also opted to pass them all after feeling “this has been on the back burner so long.”

Councillor Jan Devereux, who is associated with seven of the eight orders, assured that in large part they followed the Cambridge Bicycle Plan passed last year.

Still, as vice mayor Marc McGovern noted, “the conversation doesn’t end just because we pass these policy orders,” which now go to city staffers for study and implementation. While he and others spoke optimistically about getting some acted on right away, councillor Leland Cheung said it would help if the bicyclists showing up for the rally and public comment also showed up further along in the process.

“There’s a flurry of activity and then nothing happens,” Cheung said of city processes, explaining that during meetings about implementing reforms it’s more likely to be car owners who show up with complaints about losing a few parking spaces. “We need everyone who showed up tonight to keep showing up and make sure the bicycling perspective is always present.”

“Done right, this will bring sacrifices for everybody,” McGovern said of the policy orders, which need to balance the needs of car owners with those of users of public transportation, bicyclists and walkers.

The policy orders introduced and debated Monday by some combination of six of the nine councillors also included some looking at specific streets for projects:

Protected bike lane installation on both sides of Huron Avenue during reconstruction; and as a pilot program of at least a month starting Nov. 1 on Massachusetts Avenue between Cedar Street and Harvard Square, on Cambridge Street between Inman Square and Quincy Street and on Broadway between Prospect Street and Quincy Street. Devereux amended an order during debate to prioritize the Huron Avenue work.

Flex-post installation with separated bike lanes along Massachusetts Avenue, Hampshire Street and Cambridge Street to see whether the plastic poles work as either interim or permanent bike safety solutions while other improvements are made.

A bike-bus lane being added to Pearl Street, which is under construction. A council vote last year leaned toward maintaining parking for residents with cars and away from a protected, dedicated bike lane, with the understanding that a bike lane marked by paint and signs could be added after construction.

The orders included one from Simmons, five co-sponsored by McGovern, one by Dennis Carlone, four by Nadeem Mazen and seven by Devereux. Kelley, signed on for two.

“It’s terrible to say, but many times it takes an emergency for an agency to refocus its priorities. This is one of those,” Carlone said.