Look at superintendent’s ‘entry plan’ study prompts a committee response: Is that all?

Look at superintendent’s ‘entry plan’ study prompts a committee response: Is that all? 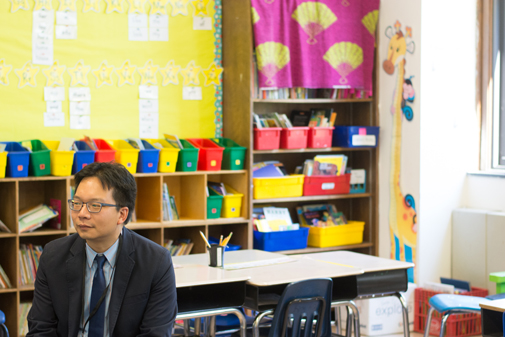 Dr. Kenneth Salim has made visits to most district schools and plans to see the rest in coming weeks. (Photo: Ceilidh Yurenka)

A peek at the new superintendent’s “entry plan” got a muted reception Tuesday, with most School Committee members offering gentle observations and questions and one sending a polite but firm message asking to see more.

“We knew a lot of this stuff,” Richard Harding told superintendent Kenneth Salim, who began work here July 1, taking the first six months of a four-year contract to analyze the district before setting policy.

“When you came to the district, when you interviewed, you knew all this stuff coming in. I do appreciate your going through the motions,” Harding said, but urged that he wants to know which way Salim leans on strategy. “This is not a district when you can have a lot of time to wait. Our district is screaming for some type of action.”

He bemoaned what he has often referred to as the “‘superintendent dance’: You come, you look, then you draw up a plan, and then you are up for contract negotiation.”

Salim has made several full-day visits to most district schools, which involve shadowing students, classroom observations and meeting with student groups, staff and family members, and plans to finish up the remaining six schools in the next few weeks. He said he’s also met extensively with administration, parent interest groups, city government leaders, education partners and foundation representatives, and reviewed district reports and budgets and consulted with an external advisory team he put together.

The timing of this update was intended to inform the budget discussions by highlighting important “themes and findings,” Salim has said.

His report – reading through 24 slides illustrating some collected impressions and data – featured representative quotes from staff, students and parents, identified several district strengths, including pride in schools, teachers and students, and some instances of school-specific “innovative” instruction and collaboration among educators. Salim also identified eight “challenges, tensions and opportunities,” including assessments and social emotional learning.

Member Emily Dexter asked what was meant by one listing identified as a challenge: “implications of controlled choice for schools.” Salim responded that the use of waitlists and what he characterized as frequent transfers from schools disrupts classrooms, a point he has made previously. He also cited “challenges around enrollment at some of the schools” – likely referring to some schools being chosen much less frequently than others – “versus a neighborhood school model solved by changing attendance boundaries.”

There was not a lot of discussion after the presentation. Dexter pointed out the long list of current district “initiatives,” explicitly thanking Salim for providing something the committee has been requesting for years. Members were also interested in learning Salim had formed student and family groups at the school level to give broad input, even during lunch in the school cafeterias. Member Patty Nolan and Harding reiterated that hearing from a wide range of families has been an ongoing challenge.

Nolan also urged Salim to make sure he incorporates the many previous surveys and reports collected in the past.

But Harding, co-chairman of the Budget Subcommittee, had the most to say, going on to reshape his critique by allowing that it is “important for you to hear firsthand, to understand the oomph” of issues such as family engagement, the achievement gap and social emotional learning. “I look forward to the conversation about how we might do something, particularly in the short term, but also for the long term,” he said.

“The most powerful thing you can do is send a message from the top,” Harding encouraged. “So [your vision and strategy] comes through loud and clear in these major documents and the budget.” He urged Salim to not “shy away from that,” even in this early stage.

As Salim outlined at his first official meeting in early August, his plan through January is to “listen and learn, identify opportunities and check understanding,” followed by strategy development and planning through next summer. Undertaking what he calls a “root cause analysis” and creating goals and strategy are scheduled for the spring, with completion by May.

“I’m encouraged by a lot of strong work that’s taking place in our schools,” Salim said. “I’m also energized to dive deeper in tackling our most persistent challenges of achievement and providing equity and excellence.”

Harding also asked Salim if his external advisers were being paid. “There is an honorarium for participation,” Salim acknowledged, “but not a contract per se.”

It was a surprise to the committee members.

Member Manikka Bowman, who chairs an ad hoc subcommittee on the superintendent’s transition, asked Salim to provide her with documentation on the amount paid to the advisers, and from where the funds came. “We have had lots of conversations on this,” deciding that external advisers would not be paid, she said, but this was before Salim was brought on board.

Minutes of the transition subcommittee meetings show that on March 24 there was discussion about putting aside unspecified funds to allow Salim to pay for “professional development coaching” services, which is in addition to the external advisory committee – but no discussion of funds for the advisory committee were recorded. Other private meetings with no member quorum would not have been recorded. Salim has said that he also has long worked with a mentor.

Salim announced in August that his external advisers were Robert S. Peterkin, a former Cambridge superintendent and a professor emeritus at Harvard’s Graduate School of Education; Deborah Jewell-Sherman, a former Richmond, Va., superintendent who is on the faculty of the Harvard’s grad school’s leadership program; Maree F. Sneed, a lawyer at the Washington, D.C., firm Hogan Lovells, with expertise in education law, including special education and English-language learning, and who also worked on Cambridge’s controlled choice plan to balance parent wishes for specific schools with socioeconomic factors; and Larry Leverett, also a former superintendent as well as executive director of the Panasonic Foundation, which partners with public schools to tackle race and poverty.

Leverett had to defer involvement, but will be joining later, Salim said.

There was no immediate response to a Cambridge Day request for documentation on the honoraria.