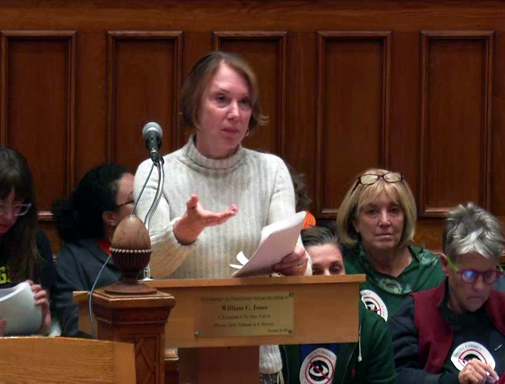 The full City Council took long-awaited action on its inclusionary housing ordinance this week, voting unanimously to hold new hearings on raising required affordable housing in future development to 20 percent as of June 30. In addition to nearly doubling the percentage, the draft language makes many other small changes.

The vote came when city staff presented language Monday, one month later than expected. At a Sept. 8 hearing of the council’s Housing Committee, head city planner Iram Farooq had promised language by Oct. 17; it arrived Nov. 17. Much of the delay involved intense collaboration between Farooq’s staff at Community Development and the city’s Law Department, according to Farooq and vice mayor Marc McGovern, who referred to “many fast-food deliveries … at all hours of the night.”

These hearings, unlike the previous six, set the council on a clear schedule to making this proposal law: It has 65 days to hold hearings and then must take final action within 90 days of the Planning Board’s hearing. All told, the process must be completed by May 1, although the council hopes to finish by February.

Cambridge’s existing zoning – in place since 1998 – has kept the affordable housing requirement at about 11.5 percent of new units in buildings large enough to qualify, even as more people are forced out of the city by rising costs. City discussions on updating the rate began more than three years ago.

For the zoning to become law, notice must be published; public hearings must be held by the Planning Board (scheduled for Dec. 20) and the council’s Ordinance Committee; the council must pass it to a second reading and publish notice again; wait two weeks; and finally vote a second time. That final vote requires at least six votes in favor, possibly seven if enough property owners – those owning twenty percent of the city – file an objection.

The requirement affects only residential projects of 10 units or more, or those larger than 10,000 square feet, unchanged from the current version. The new draft also covers existing buildings that have been unoccupied for two years, part of the council’s desire to avoid vacant buildings. It also allows for more three-bedroom units, trading a larger number of units for more spacious ones, recognizing a strong demand for family-sized affordable units. It increases the income limit for rental units, and requires a five-year review of the ordinance’s performance.

Many details of the ordinance were hard-fought in the Housing Committee hearings. Although nothing is guaranteed – the council can still make changes – the seven councillors present at the Sept. 8 meeting reached firm conclusions.

Besides the agreement on 20 percent, the most difficult issue the committee wrestled with was how to phase in the requirement. After initial thoughts of a 13 percent starting point, the committee settled at 15 percent with a delayed move to 20 percent.

It nearly adjourned without fixing the date time of the increase, but councillor Jan Devereux raised a concern for staff: “I would like to put in a plea to consider when you’re drafting that language inserting a date by which this 20 percent needs to be reached. Because, through no fault of anyone, but just our laborious process, this is looking like it’s dragging on just through procedure.”

It took nearly 10 minutes of back-and-forth before the committee agreed to insert “six months from the date of ordination, or on June 30, 2017, whichever comes first.” David Maher voted against the hard June 30 deadline.

At the beginning of the hearing, the development community, represented by the Cambridge Chamber of Commerce, continued to push for a lower inclusionary housing set-aside rate. They asked the council to raise the rate to 15 percent, and to wait 18 months to do so, with an interim step of 13 percent after six months. They waited until just before the meeting to make their proposal, and Mayor E. Denise Simmons was not pleased.

“I think it is incredibly unfortunate that the committee would be receiving this material 90 minutes before the scheduled start time,” Simmons said. “We are right on the precipice of voting this out of the committee, and had this proposal come even one week ago, I think we could have reviewed it and discussed it without slowing the process. As it stands, this memo is coming far too late in the process, and I’m not prepared to hold up the work we’ve been engaged in since April in order to review a proposal that would likely require additional committee meetings.”

Members of the Affordable Housing Trust, specifically Susan Schlesinger and Peter Daly, made the arguments that carried the day: “At some point you believe 20 percent is a workable and reasonable policy initiative, or you don’t. And there’s a difference of opinion,” Schlesinger said.

“We came to the consensus that the 20 percent was really vital,” Daly said, adding that developers had been on notice of the likely increase since the city’s consultant issued its study in March. 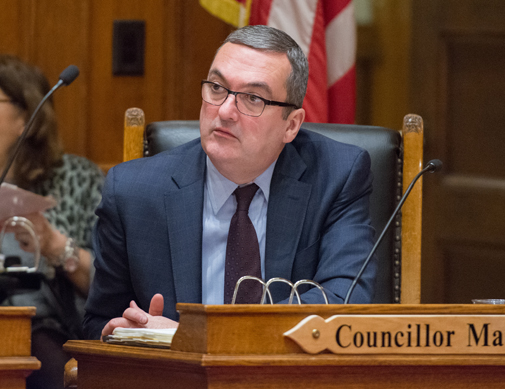 In addition to voting against the firm date for the 20 percent increase, it appears Maher could effectively vote against the inclusionary ordinance. On Nov. 9, Maher announced he would join the Chamber of Commerce as its president beginning Dec. 12 while remaining on the council, “recusing himself on the ‘rare’ occasions a chamber issue comes before [it],” according to the Cambridge Chronicle. But passing a zoning ordinance requires at least a two-thirds vote of the entire council; a recusal is effectively a vote against it.

It’s not apparent whether the Chamber supports the current 20 percent requirement. At public comment on Monday, Sarah Kennedy, its director of government affairs, said “we understand and appreciate that 20 percent was an important goal for much of the council,” but stopped short of supporting it. “We look forward to continuing the dialogue where we may be of help.”

Housing advocates on and off the council seemed jubilant Monday at making real progress, but tempered their optimism with concern about policy changes from a future Trump administration.

“As people know, the inclusionary zoning petition is really a very central, maybe the most important, pillar in our affordable housing program right now,” Schlesinger began. “What’s changed in the past two weeks is we have a new president. There are absolutely no signs that the president-elect thinks too much about affordable housing. We know what he thinks about fair housing, which is a real issue. Advocates are really worried about what’s going to happen on the federal level with things like the low-income tax credit, Section 8 vouchers and many of the other tools we’ve been using to create affordable housing in the commonwealth and across the country. So it’s more important than ever that this ordinance move quickly through the process, so we can start seeing units in the mix and people living in them.”

“This is huge,” McGovern said. “We are almost doubling the amount of affordable housing that developers have to provide to the city. … I think this is one of those things we’re going to look back on and say we really made a difference, particularly for some of the most vulnerable people in our community.”

“I really hoped that we would be looking forward to an ability to lobby the congress to increase housing funding,” councillor Nadeem Mazen said. “And I think we should all be quite concerned probably that the opposite will happen. With that in mind, I think it’s really important that we have this conversation.” 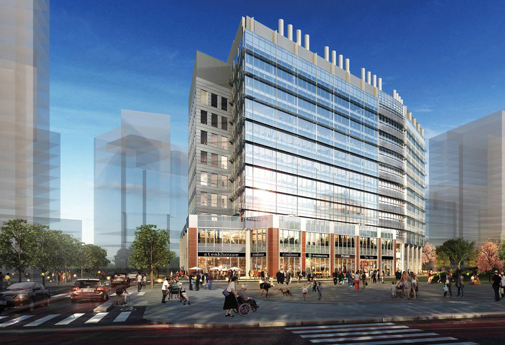 NorthPoint developers plan to build their “JK” building next.

One of the issues the council worried about Monday, and at the Sept. 8 hearing, was the issue of large development projects that can take a decade or longer to complete, operating under so-called Planned Unit Development special permits. These include NorthPoint; MIT’s new development on Main Street in Kendall Square; other parts of Kendall Square owned by others; the East Cambridge Riverfront; and Charles Square near Harvard.

Because these PUD developments have already been permitted, housing built in them will not be subject to the increased inclusionary percentage – it applies only to new permits. Although the Volpe Center parcel in Kendall is within a PUD, no PUD special permit has been applied for or issued, so it will be subject to the 20 percent requirement.

Current draft language allows these permits to be amended without making them subject to the new requirements, as long as the amendment does not decrease the residential space or increase commercial space. Developers and the Chamber of Commerce had negotiated this provision because it’s common for PUD plans to evolve in the years between buildings going up, and they expressed fear that increasing the inclusionary requirement for projects that were already financed could cause their numbers not to work, thus stopping development.

Councillor Dennis Carlone suggested that the city needed to take care with this provision over long time horizons. Carlone pointed to NorthPoint as “going on forever” with three buildings taking a decade or more to be built. “And somehow … that doesn’t feel right,” he said. “Time moves on.”

Devereux joined him, noting that the land values have continued to increase during that time, saying the PUD process gave the NorthPoint developers “a competitive advantage over other landowners.”

Time does move on: NorthPoint developers are back at the Planning Board on Dec. 6 to review their “JK” building, a 370,000-square-foot lab and office building with 15,000 square feet of ground-floor retail.