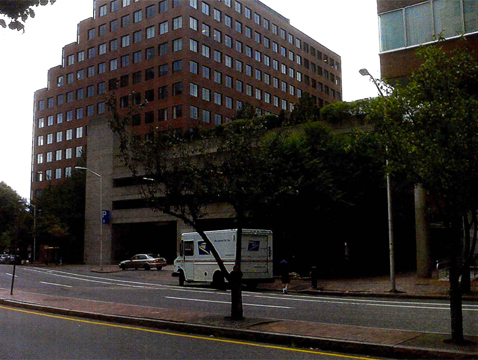 Boston Properties needs 8,600 square feet on Ames Street to put up a residential tower, where it may be asked to provide 18 percent of the units as affordable housing. The current standard is 15 percent. (Photo: Boston Properties)

The City Council wants a study that could mean a permanent increase in the amount of affordable housing in large residential developments – and if work on the study started now, it would come back for a vote in 2014, potentially too late for some of the flood of projects under way in the city.

The building proposal that raised the issue – Boston Properties’ bid to build a residential tower on Ames Street in Kendall Square – has been described as potentially breaking ground early next year.

Some estimates say there are 5,500 units of housing on the way within the next decade or so, likely bringing the city quickly back to the peak population of 120,740 recorded in the 1950 census, but lower-and middle-income residents are already being squeezed out.

A change in zoning could mean the difference between setting aside about 633 units for lower-income residents or as many as 990, but officials say the study comes first.

“Unfortunately it does take a fair amount of time,” said Brian Murphy, assistant city manager for community development. “I’m not really sure of a way to expedite it.”

In addition to taking months to complete, the so-called nexus studies are expensive enough to need council authorization. A 2002 study cost $50,000 and City Manager Robert W. Healy called this one more complicated. “We’re probably looking at in excess of $60,000,” he said.

Despite councillors’ interest in getting the study, which would explore middle-income housing options and whether there’s a basis for raising the amount of affordable housing called for in the city’s Inclusionary Housing Ordinance, their action Monday was in referring discussion of the report to councillor Leland Cheung’s Long Term Planning Committee – then, at the request of councillor Tim Toomey, turning that into a joint meeting with the committees for economic development, training and employment (led by Toomey) and housing (led by Marjorie Decker). The meeting date hasn’t been set.

“The impetus is that we’re anticipating a lot of development in Cambridge within the next couple of years. We certainly don’t want to be caught having this come out after that development is on the way,” Cheung said.

The standard since 1998 has been that market-rate housing developments of 10 or more units (or 10,000 or more square feet) set aside 15 percent of units as affordable for low-income tenants, but hitting that standard gives builders bonus space in which to build – lowering the set-aside to about 11.5 percent, Murphy acknowledged in a May 1 memo and again Monday at a City Council meeting.

“You could certainly make the argument that we’ve fallen below 15 percent,” he said.

The start of a standard?

The council addressed that in giving approval April 8 for the Massachusetts Institute of Technology redeveloping 26 acres in Kendall Square: In the 240,000 square feet of housing to be built, a proposal by Decker that was voted in by the council made it so there will be 18 percent set aside for lower-income tenants.

But that’s only the start of a new round of redevelopment in Kendall, with Central Square due for denser, higher construction afterward. It was only two weeks after the MIT vote that Boston Properties raised the issue anew by coming to the council seeking a sliver of sidewalk on Ames Street, or 8,660 square feet between Main Street and Broadway, to allow it to build its residential tower – one the company committed to long ago, despite its impossibility without the granting of city space. (The council approved making the land available 7-0-2, with Toomey and Decker being the two not being present to vote.)

Councillors Minka vanBeuzekom and Craig Kelley made it clear they knew developers weren’t hitting the 15 percent standard, but wanted Boston Properties to honor it. In Kelley’s words:

They were clear about this being 15 percent of the units, not the 11.5 percent you typically come out with with affordable housing. This isn’t, I think, enforceable in any way, but that’s what they’re throwing out that they’re going to do, and I think we should do our best to hold them to that and not let them drop down to the traditional 11.5 percent that our inclusionary zoning typically gets us.

It was Cheung who took it further, broaching the idea of making another 18 percent demand and setting it as the standard.

Not required to accept recommendations

Testimony April 22 about the Ames Street building raised questions even as it answered them. Healy reminded Cheung of how he could get the 18 percent affordable housing: “If the zoning were to pass before the transaction were to take place, the zoning would be what’s in place and the property owner would have to comply with the zoning at the time.”

But Decker’s securing of 18 percent affordable housing in the Kendall Square proposal was a condition MIT had to accept to get its zoning change, not zoning that was in place and with which MIT had to comply. Cheung was aware of this; when asked after the meeting why the nexus study was necessary, he said it was to ensure all developers had to meet an 18 percent standard automatically.

“If we can get that codified before the sale, that would be certainly my desire,” he said.

The other question raised is how necessary the nexus study is. Murphy told the council that “A recommendation to increase the inclusionary zoning numbers from 15 percent to 18 percent would require going through a nexus study to provide the strongest legal foundation for that policy.”

What if the study came back suggesting even less affordable housing than the city was getting now, Cheung asked. What if it came back saying 12 percent was the ideal rate and the council, as policy-makers, disagreed?

“There’s no requirement that council adopt the recommendations of the study,” Murphy said.

In addition, “you could certainly make an argument that to the extent we’ve fallen below 15 percent we need to make up that ground,” Murphy said.