‘Miss Sloane’: Lobbyist sticks to her guns, does some good in Washington cesspool 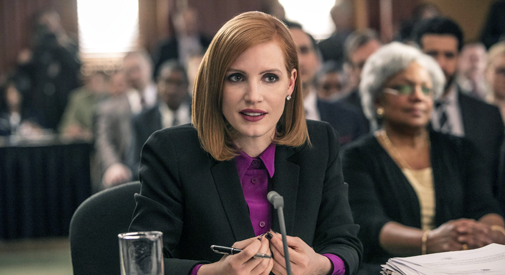 ‘Miss Sloane’: Lobbyist sticks to her guns, does some good in Washington cesspool

With Donald Trump pulling off a staggering electoral upset of Hillary Clinton for the country’s top post, “Miss Sloane” couldn’t be more timely as it rolls up its sleeves and delves into the dirty games people play to influence and garner votes. And let me tell you – at least as the movie has it – D.C. politics is a nasty battleground where any dirty laundry, even a soiled handkerchief, can be used to upend a career and alter the course. It’s a chess match where understanding the long game is critical and taking some knocks along the way is a given. 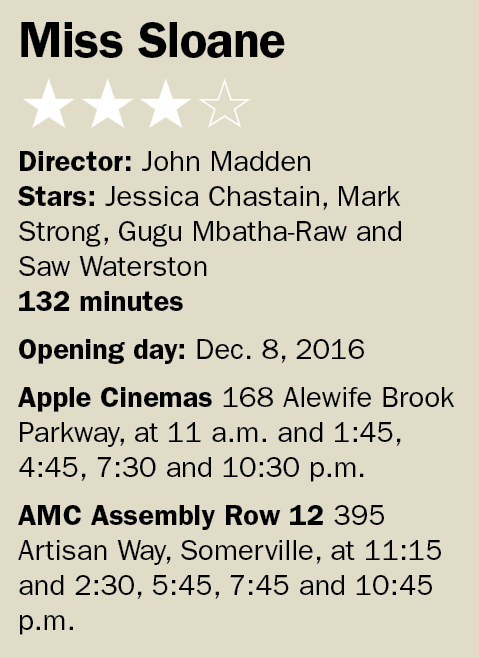 At the center of the stink hangs the titular Madeline Elizabeth Sloane, a lobbyist played by Jessica Chastain, whose C.V. of film has become an intriguing array of strong women characters with demurring facades. Her Miss Sloane is no exception: porcelain, confident and elegant, with a tiger’s sense for blood, she plays only to win. Initially Sloane toils at one of poli-town’s big firms (helmed by Cambridge’s own Sam Waterston), but leaves abruptly for a more grassroots group interested in taking on the gun lobby to get better checks and balances on gun purchases.

If that sounds like a lot of time on the phone and in the conference room, it is; but the tart script by first-time scribe Jonathan Perera gives Chastain enough nastiness and juicy dialogue to twirl that you expect every one of her verbal jousts to leave a combatant on the floor gasping for air. The film, directed by John Madden – best known for “Shakespeare in Love” and “The Best Exotic Marigold Hotel” – moves in gyrations done before and more genuinely in “Michael Clayton” and “Thank You for Smoking,” but does bring a unique lens to the D.C. universe, especially the means of capturing votes and identifying target blocs.

When Trump appointed Steve Bannon to his cabinet, I called U.S. Rep. Katherine Clark to urge her to protest the selection of someone with seemingly racist views. Her office appreciated the sentiment and told me the most effective way to get pressure on the issue would be to reach out to people I knew in red states and to have them lobby their representatives, because they were the ones with the votes that mattered. If it wasn’t clear in our last election how important every vote is (and it should be), Madden’s political potboiler sensationally underscores that point as lobby groups leverage constituent groups – and a few backroom shenanigans – to swing congressional voters.

Much of the success of the film hangs on Chastain, and she’s more than up to the task – her long, aquiline nose and ethereal blue eyes filling the screen as her Sloane pops pills, uproots the old guard and jumps into bed from time to time with a buff young escort. The overall arc and not-super-well-laid twists fill the space (there’s a few borrowings from “All the President’s Men” unwise because they’re just too obvious) adequately, but it’s Chastain who fills the role that lifts the film above the cesspool it seeks to eviscerate.