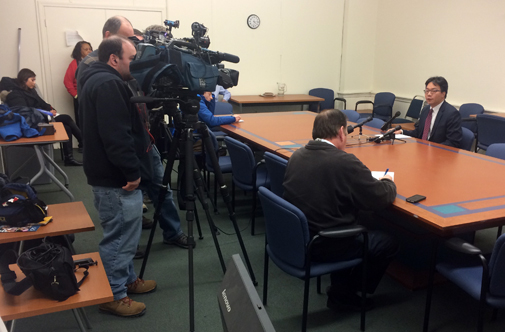 Since reports of three swastikas and “hateful language” found at Cambridge Rindge and Latin School, two more examples of hate speech have turned up Thursday – this time both found in girls’ bathrooms, after the previous incidents were discovered in three boys’ bathrooms.

At a Thursday afternoon press conference, Superintendent Kenneth Salim said all five examples of hateful language has been anti-Semitic in nature, though he couldn’t go into details while an investigation is ongoing. Cambridge police and the state Attorney General’s Office are involved in finding the perpetrators, he said. The Jewish Anti-Defamation League has also been consulted.

While he was unable to say whether surveillance video was being used as part of the investigation, students taking part in support sessions could play a role in finding the person or people behind “the five different instances in five different locations” of vandalism and hate speech.

“We’re actually culling some of the information from those discussions this morning,” Salim said.

The most recent examples of hate speech were discovered Thursday afternoon, resulting in an update Thursday to a communication sent home Wednesday by Principal Damon Smith. The most recent swastikas could be the result of “copycat,” Salim said, though the distinction was unclear.

Students were showing “a lot of frustration and dismay” during the support sessions, he said. “This is incredibly upsetting and disturbing imagery to find, particularly because it is so at odds with what our values are as a community.”

According to U.S. Census data, 28 percent of Cambridge residents are foreign-born; 11 percent are naturalized citizens. In a state breakdown of school data, enrollment was found to be 39 percent white, followed closely by the percentage of black students: 32 percent. Students of Hispanic origin account for 13 percent of the student body, and Asian students for 11 percent.