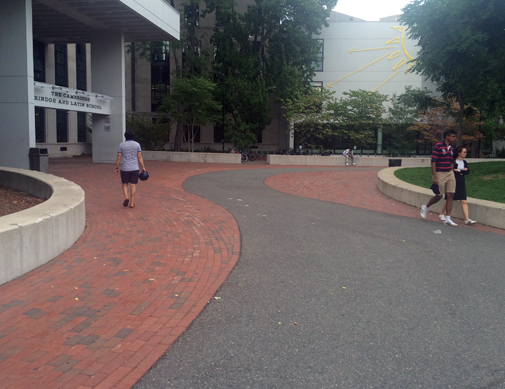 Swastikas and “hateful language” have been found in three boys bathrooms at the high school over the past two days, district officials say.

An investigation has begun into the “racist, anti-Semitic and hateful graffiti” found in bathrooms on the third, fourth and fifth floors of Cambridge Rindge and Latin School – one on Tuesday and two Wednesday, Principal Damon Smith said in a letter sent to parents Wednesday afternoon.

Update on Dec. 23, 2016: The text of the graffiti, according to the high school’s student newspaper, The Register Forum, was: “The power lost of this sign will be made great again with President Trump. We will rise southern rituals will prosper the world shall kneel in a past due [sic]. Our world will be of rule by certain and [writing unclear] fear to strike the hearts of so many.”

The school’s administration has been in touch with the Cambridge Police Department, the superintendent’s office and the Office of Safety and Security about the incidents, Smith said. In addition, Superintendent Kenneth Salim said, the incident has been reported to the state attorney general’s hotline for incidents of bias-motivated harassment and support was made available for students and staff who wanted to talk about the incident.

“If the responsible party is identified, appropriate action will be taken, up to and including disciplinary and legal action,” Smith said, adding:

The symbol and language are provocative and upsetting. Its history as a signal for racist, anti-Semitic and hateful speech and actions is well known. It is intended to make people feel unsafe and unwelcome. I am deeply saddened that this symbol and language has been displayed in our community.  I am sorry that students and staff may have seen the symbol and language in our school.  It does not represent who we are.

The graffiti is not the first hate speech and race-related violence the city has seen since the presidential election, and a swastika was previously found after the November election at the Vassal Lane Upper School. The symbol has also been found in other school districts; a swastika and the name “Trump” was found Nov. 30 written on the chalkboard of a Brookline middle school, similar to racist and homophobic graffiti found in a Brookline park in September.

Students at CRLS formed a group called United Students of America and rallied in November against an increase in racist and homophobic comments. A large turnout had organizers initially excited, with one founding member saying on Facebook that she’d “never felt more proud to be a CRLS student … I’m so excited for what is yet to come.”

Salim had words of encouragement for the students and community.

“In the aftermath of discovering these upsetting symbols of hate, we will continue to affirm our community’s values of diversity, inclusion and respect,” he said.