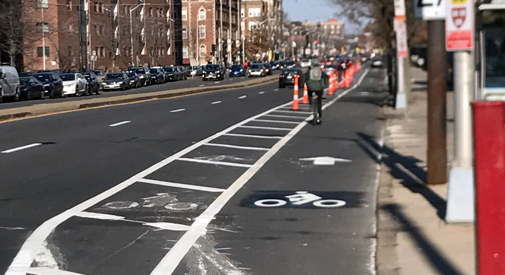 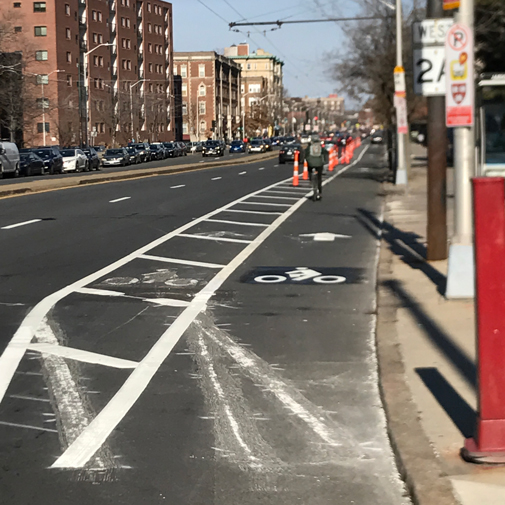 The City of Cambridge made good last week on a City Council order from October implementing two experimental, separated bike lanes along short swaths of Massachusetts Avenue – one in Central Square, along the northbound stretch skirting Lafayette Park; the other also northbound, just north of Harvard Square along the Harvard Law School campus. The Law School installation removed parking spaces; the Central Square setup shifted parked cars outward, so the bike lane runs between the passenger side of parked vehicles and the curb. Each section is about about a football field long.

The implementations are similar to ones installed in November along Massachusetts Avenue in Boston as part of the city’s pursuit of Vision Zero – a program aimed at achieving a rate of zero traffic fatalities. The October order was one of a series of bicycle safety orders pushed by cycling advocates and groups after the death of Amanda Phillips in Inman Square in June and Joseph Lavins, struck by a truck in Porter Square, three months later.

The separation device is a zebra-striped swath painted on the road with flex posts, and the raised structures are removable pylons. More permanent flex barrier posts have been ordered and should be installed in the next two weeks, weather permitting, said Joseph Barr, director of Cambridge’s Traffic, Parking and Transportation department.

Still, there is “no set date” for how long the lanes will be left up, Barr said. The primary purpose of the temporary measures is to garner feedback on safety and the feasibility of the solution for expansion. There are plans for similar protected lanes in Inman Square in the spring, but the loss of parking spaces is typically fiercely debated in traffic changes.

“Folks will realize the loss of some parking in some areas is less important than than creating safe streets for those riding bikes,” vice mayor Marc McGovern said.

The reaction from the bike community so far has been guarded elation. “The new protected bike lanes are a great start,” said Joseph Poirier, of the Cambridge Bicycle Safety group formed in the wake of Phillips’ death, “but we know that we won’t see the huge mode shifts to biking from driving until we have a complete network of low-stress, protected bike lanes throughout the city. Isolated segments are a helpful start, but people won’t start to replace driving trips with bike trips until their entire journey is protected and low-stress. The research is pretty clear about this.”

Cambridge can be a leader in rolling out a connected, comprehensive network of protected bike lanes, group members say. “Remember that all of the great policies in the Netherlands started with a single car-free day in Utrecht,” is how Richard Fries, executive director of Mass Bike, sums it up.