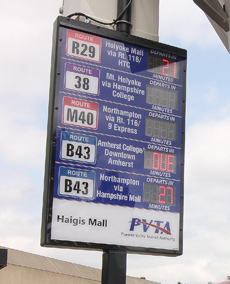 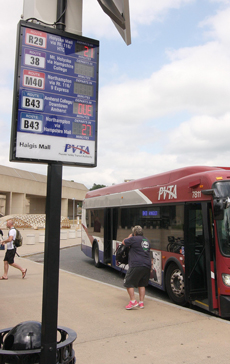 This example of real-time bus tracking was used by backers of the project to draw participatory budgeting votes.

Adding solar panels to the Main Library, flashing lights for crosswalks and real-time bus tracking displays led the city’s third annual Participatory Budget process, in which 4,730 residents age 12 and older voted on how to spend $700,000 of the city’s budget. (Well, actually $706,000.)

Community members brainstormed project ideas in June and July for volunteer budget delegates to research and develop into formal project proposals from August through November, staff explained. Proposals were vetted by city staff and approved by the city manager to appear on a Participatory Budget ballot in December for a public vote. Each voter could name five projects t0 fund.

The projects to be included in the city’s capital budget for adoption for the 2018 fiscal year are, in order of total votes:

Solar panels atop the main library to help meet climate goals by reducing emissions – and to save money. Project cost: $260,000. Number of total votes: 2,184.