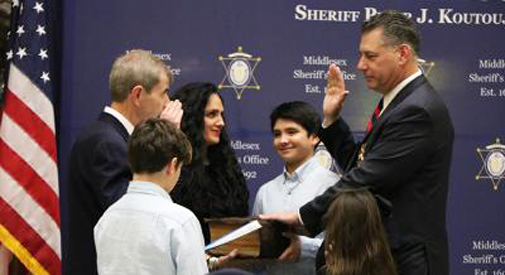 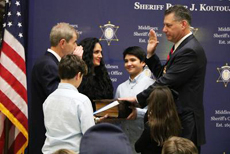 Secretary of State William Galvin, left, administers the oath of office to Middlesex Sheriff Peter J. Koutoujian at the Massachusetts State House on Jan. 4. Looking on are Koutoujian’s wife, Elizabeth, and children Cristian, Peter and Isabel.

From the Middlesex Sheriff’s Office, Jan. 4, 2017: Sheriff Peter J. Koutoujian was sworn in today for a second term as Middlesex County sheriff during a State House ceremony held in Nurses’ Hall.

“Today is a day to celebrate the incredible accomplishments of our first term, but – more importantly – to look forward with great hope and optimism to the work that remains,” Koutoujian said.

Massachusetts Secretary of State William Galvin administered the oath to Koutoujian, who is just the 30th man to serve as Middlesex Sheriff in the office’s 325-year history.

In his inaugural address, Koutoujian spoke of first-term accomplishments including the launch of the Housing Unit for Military Veterans, the only such unit in Massachusetts dedicated to helping incarcerated Veterans turn their lives around. Since its launch last January, more than 110 Veterans have participated in HUMV.

He also spoke of the Medication Assisted Treatment And Directed Opioid Recovery Program, an initiative aimed at assisting incarcerated individuals reentering the community battle opioid addiction. In just over one year, 48 people successfully completed the six-month program with only one of those 48 recidivating. The program has drawn national attention, with the Office of National Drug Control Policy inviting the Middlesex Sheriff’s Office to present in a number of forums, including at the White House.

“HUMV and Matador are initiatives that are having tremendous impacts in the lives of those placed in our custody, their families and the community at-large,” Koutoujian said.

Looking forward, the sheriff discussed a newly formed collaboration that includes the Middlesex Sheriff’s Office and more than 20 county police departments aimed at breaking the cycle of incarceration for those suffering from mental health and substance use disorders in part by increasing opportunities for diversion to treatment. Formed as part of the White House’s Data-Driven Justice Initiative, the local collaboration will continue beyond the end of the Obama administration.

“These are issues we cannot arrest and incarcerate our way out of,” said Koutoujian, noting 46 percent of all new admittances to the Middlesex Jail and House of Correction report a history of mental illness and 43 percent require medical detoxification. “As proud as I am of the programs and efforts we have inside out facility, you should not have to come to jail to receive treatment and care.”

Also looking toward the future, Koutoujian discussed the ongoing local and national debate over criminal justice reform. A founding member of Law Enforcement Leaders to Reduce Crime and Incarceration, and a member of Council of State Governments Working Group studying the criminal justice system in Massachusetts, Koutoujian has become a leading voice for smart justice policies including for increasing opportunities for diversion of appropriate low-level offenders suffering from mental health and substance use disorders, and the implementation of a validated pretrial risk assessment tool.

A former assistant district attorney and legislator, Koutoujian was first appointed to fill a vacancy in the Sheriff’s Office in January 2011. He subsequently won a November 2012 special election to fill the remainder of the term and this past November won election to a full six-year term.

With more than 1.5 million people, Middlesex is the most populous county in New England and one of the 25 most populous in the United States. The Middlesex Sheriff’s Office is responsible for ensuring the care, custody and control of approximately 1,100 detainees awaiting trial and inmates serving sentences of up to two and a half years.