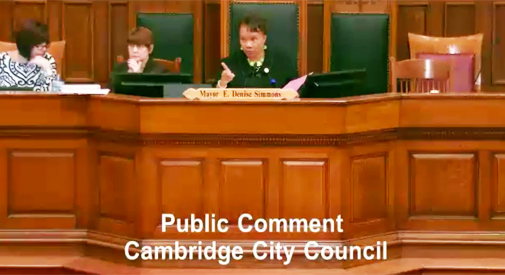 The rules of how to be the press in Cambridge haven’t become any more clear since Monday, when Mayor E. Denise Simmons told independent journalist John Hawkinson that he was either a citizen or member of the media, but couldn’t “have it both ways” – saying that as media he had “privileges that we’re not giving to the public.”

That defies any traditional understanding of government-press interaction, in which government talks to the press specifically because it represents the citizenry. Government information is public information, though government sometimes carves out exceptions against which citizens tend to push (sometimes as members of the media).

The specifics of what Simmons meant Monday were unavailable Tuesday, Wednesday, Thursday or Friday, as an email and daily follow-up phone calls went unanswered with the explanation that chief of staff Neal Alpert, whom mayoral staff said “usually handles the press,” has been out sick all week. A member of the public who was not a member of the press might have received an immediately answer, as a staffer other than Alpert could have conveyed a message from the mayor.

Or the mayor could have used a moment out of the remaining 29 hours in the workweek to respond personally by phone or email.

To hazard a guess, Simmons may have been referring Monday to her setting aside three chairs in Sullivan Chamber for “media,” so even if the room fills up for a contentious issue, there are still seats for reporters. A list of public speakers is provided to media during the meeting by the city clerk, an aid in proper identification when they are quoted, and Hawkinson posts these online. Hawkinson also plugs a recorder into the city’s audio feed.

In years past, media were allowed to sit at a table behind city councillors’ desks, but that space was lost during renovations when audiovisual equipment was added to the chamber and a ramp was added to the mayor’s dais. Changes to chamber technology in the past couple of years have made it harder to hear and record clearly what is said in the room.

Convention when it comes to the media are mixed, and informal. Some journalists believe the perceived “objectivity” of their calling is so sacred they cannot even vote, lest they be seen as being tainted or biased toward a particular candidate or issue, though many brush that off as extreme. The bigger issue is what constitutes a journalist, especially as “citizen journalism” has been raised as a way to alleviate financial problems in legacy media that have caused institutions such as the Boston Globe to reassess their own role. The lines between prolific user of social media, blogger, citizen journalist, nonprofit journalist and “professional” journalist are fuzzy at best.

Hawkinson’s writing is sometimes edited and posted on Cambridge Day. But he attends far more meetings and civic events and tweets comprehensively on far more topics of public interest than appear on this site.

Another citizen who walks some of those lines responded to the situation Monday:

This is not how democracy is supposed to work. #CambMA https://t.co/6chCzJFXEY

Simmons has been a strict enforcer of public comment, quick to act in ways that occasionally brush up against First Amendment issues. In April she cut off resident James Williamson during public comment for what she called engaging in “personalities”; Williams had said citizens “deserve to know” who was hosting councillor Dennis Carlone during travel to the Middle East. City Council rules and the city charter both say citizens “shall have a reasonable opportunity to be heard” on matters being considered at a meeting.

The current rules of the council offer no guidance, but there are other signs Simmons is interpreting rules in surprising and unusual ways.

“I’m not aware of any such rule. Is that culturally speaking?” Mazen asked.

Though Simmons told Mazen she would explain her reasoning at another time, Mazen said Friday that the conversation hadn’t yet taken place.

In addition, after video of the Monday exchange became public, Hawkinson was invited to a Thursday conference held with the New England First Amendment Coalition by Jordan Frias, the New England chapter president for the Society of Professional Journalists.

Hawkinson spoke Monday because a letter he sent to the council appeared on its “late” agenda despite being sent a dozen days earlier. That meant it was taken up with no warning to members of the public who might have spotted it on the agenda over the previous days and come to the Monday meeting to comment on it.

No reason was given for why a letter filed a dozen days earlier appeared as though by surprise on Monday’s “late” agenda.

And the topic of Hawkinson’s letter? That the minutes of an Aug. 1 closed-door session had been published with every single word redacted – resulting in a document filled entirely with black bars: 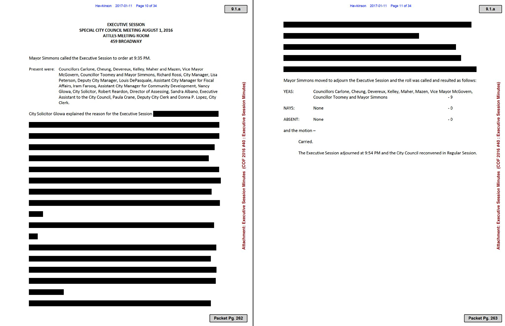 It was a little much for at least two councillors.

“I look at the redacted statements and … it looks extreme to me. Maybe it’s not exactly what should happen,” Craig Kelley said. “We are all trying to figure out what the rules are here and to include members of the press … My guess is, we’ve gone too far in the redacted direction.”

Jan Devereux chuckled that the scrubbing was so complete that though she’d been at the meeting she couldn’t remember what the topic had been. “It’s so redacted that I guess I’ll never remember, unless I took some furtive notes,” she said. “We could be more transparent in what we’re doing, even in these executive sessions.”

Simmons suggested a policy order be crafted by councillors for discussion in their Government Operations Committee.

“I’m very concerned about transparency and public process,” Hawkinson said during his public comment. “And the way in which this was handled makes it far worse.”