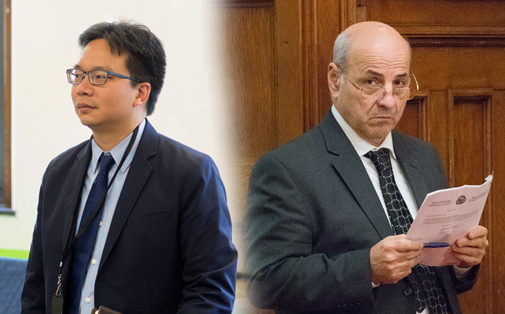 An update on budget planning came at the end of a long School Committee meeting. Cameras were shut off with the close of regular business to begin a budget update “retreat” that will get formal, more complete presentation March 14. Superintendent Kenneth Salim and his staff told committee members of increased funds committed to the schools by City Manager Louis A. DePasquale and increased enrollment projections now that the January kindergarten lottery has closed. Budget proposals for ninth-grade English Level Up – eliminating the dual track of honors and “college prep” for that class – and a pilot program for world language in two elementary schools rounded out the meeting, with committee members praising Salim and his staff for seriously addressing some stubborn issues.

“I just want to say,” budget co-chairwoman Kathleen Kelly said, “I am feeling a new energy lately.” Turning to Salim, she said, “We are finally working on some issues that we have struggled with for a long time, and it feels good.”

For the first time in years, the school department expects revenues to be higher than the projected “maintenance budget” – the cost of running the current year’s operations next year, adjusting for enrollment changes and higher costs – allowing the administration to add financial support in some areas without deep cuts. After recent negotiations between Salim and DePasquale, the city has offered to increase property tax revenues, all earmarked by state law for schools, $10.2 million over the current $148.4 million. With the schools’ chief financial officer, Claire Spinner, assuming federal and state aid and other miscellaneous grants will stay the same in the coming year, total proposed revenue for next year now comes in at $183 million – about $1 million over the maintenance budget costs.

Much like last year, the maintenance budget rose just over $9 million, mostly from required staff increases, a 20 percent increase in special education out-of-district tuition and the significantly more expensive busing contract the department signed last year when there was only one bidder. Out-of-district costs continue to rise not only for programmatic reasons, Spinner said, but also because the portion of the costs paid by state funds has been declining steadily. Staff changes come from continued rising enrollment needs, as well as legislated increase in educators for the autism and the English language learners programs.

Some good budget news comes from energy savings, largely driven by recent capital projects to replace oil furnaces with natural gas. The $400,000 savings will be put toward building maintenance.

In addition to increases in the maintenance budget, Salim’s staff have begun proposing figures for other increases.

Chief Operating Officer Jim Maloney reported that the January kindergarten lottery, which pulls in about 80 percent of all kindergarten registration for the next year, drew 628 registrants, “the largest we’ve had in at least 28 years.” Making adjustments for more new registrants and likely withdrawals, Maloney projected a shortage of about 12 seats and proposed, to be safe, an additional two kindergarten classrooms, though he acknowledged it will be hard to find room. “Our schools are very, very tight,” he said.

Cambridge Rindge and Latin School Principal Damon Smith gave new details on the Level Up program for ninth-grade English classes. In response to committee requests to reexamine class sizes, new classes will be targeted at 17 or 18 students each, down from the high school’s typical limit of 24. He proposed adding one full-time English teacher and three full-time special education support staff.

Member Patty Nolan helped work out how that allowed the schedule to work: The high school has 23 sections of honors and “college prep” – the misnamed lower-level class. The CP classes are two semesters long, while Level Up, like honors classes, will be only one semester. That frees up teachers and allows for existing staff to handle most of the load. Together the staff will also be able to run “honors access” support classes for an estimated 100 students, or one-fifth of the first-year students, every other day for the year.

Level Up classes will have some co-teaching, Smith explained, but not daily. The three new Office of Student Services teachers, he said, will allow for a better partnership between content and OSS teachers, and co-planning time will be built in – an improvement over current disconnect between the special ed office and content teachers. “Another guiding principle” was better balance, class by class, between students with and without disabilities, Smith said.

Asked by members who will be in the honors access support classes and how they will be identified, Smith and Deputy Superintendent Carolyn Turk said that work has already begun. Teachers, principals and counselors are taking part in “an enhanced level of outreach,” Turk said.

The administration is also using a network of after-school and summer program partnerships to begin support for some eighth-grade students coming to honors-level work next year. They will offer summer “preview” classes, probably for two weeks, to introduce willing students to the curriculum. Some programs named as likely to offer Level Up preview work within their own curricula are the school’s own AVID and Rise Up programs, Breakthrough, Harvard University’s Crimson Summer Academy, and MIT’s Upward Bound. The programs already engage many students likely to need Level Up supports.

The programs will be paid for through already-put-aside support budgets and from high school improvement funds, Smith said. Professional development and other teacher supports and coaching will also be covered by existing set-asides, including ongoing workshops already funded with Carol Burris, whose work centers on de-tracking public schools.

Manikka Bowman urged that the OSS staff also help ensure that advanced learners were adequately engaged. Smith had assurances, including on professional development, better curriculum, that the four new teachers will allow for “greater flexibility around grouping” and that smaller class sizes will lead to “stronger relationships between students and teachers.”

Members seemed enthusiastic. Richard Harding urged Smith to send a letter to each of the families of incoming first-year students explaining the changes.

The total proposed cost for next year’s English Level Up is $281,200 for the four new staff members. Other costs are paid by existing budget allocations.

Assistant Superintendent for Curriculum and Instruction Anda Adams updated the committee on elementary school language, proposing a pilot program for next year for one grade level in two schools.

Since Adams’ December presentation exploring how to fit foreign language instruction into the elementary schools, her department issued a survey to teachers and families and began holding focus groups at schools to get more in-depth comments.

They started with the Haggerty and Cambridgeport Schools, which led to five teachers from those schools, and one parent, pushing back on the idea in public comment. Three more Haggerty teachers came to public comment Tuesday. As Adams said, there’s concern among educators their days are already too full. “Something has to give,” Adams said, quoting them.

Despite early foreign language instruction being often touted as helping to improve education and decrease the achievement gap through improving cognitive skills and brain synapses, Adams reported that some educators are concerned it would widen the achievement gap, especially if the instruction interferes with the one-on-one support offered to struggling students throughout the day. Haggerty teachers argue that half their students come from homes where another language is spoken – the implication being that a third would be unnecessary or counterproductive.

Other educators have said they would “want to consider a longer school day” and beginning foreign language instruction earlier than the proposed fourth grade, Adams said. Given the staff concerns, she said, they are proposing that two schools “that really want world language” volunteer to start a pilot this September. The pilot will allow more information about the impact on learning, the rest of the day, other coursework and the schedule, Adams said, though she warned that the information will only start to paint the picture.

Nolan expressed disappointment, but said she could nevertheless support the proposal. “It’s not that I don’t respect the teachers,” she said, “but I believe so strongly that this is important for closing the achievement gap and developing 21st skills.” She argued, not for the first time, that some constraints in teachers’ days should be removed. “Even with having 90 to 120 minutes a day for ‘literacy,’” she said, “we are still not where we should be. Maybe we shouldn’t be doing all this literacy every day. Maybe we should think creatively and not keep doing what we are doing.”

The cost of one full-time world language teacher, split between two schools, is $70,300. The curriculum and instruction material will come from existing budget allocations.