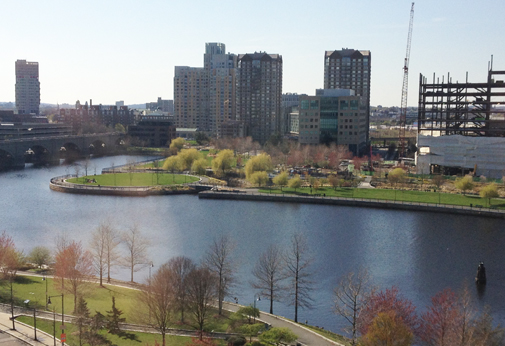 NorthPoint construction in 2013, as seen from Boston. (Photo: Marc Levy)

While the city advances to nearly doubling developers’ obligations to include affordable housing in their buildings, its biggest development parcel – the 42-acre NorthPoint – is stuck in time, and could stay that way for the duration of a 27-year agreement.

But some city councillors put developer DivcoWest on notice Monday that they were looking for a way to impose higher figures, and expecting to get the chance if and when the company comes to the city to amend or extend its planned unit development special permit.

“I want to telegraph to the developer that this is definitely going to happen. You’re going to need a small change, or you’re not going to finish all the buildings in time,” triggering new negotiations, councillor Nadeem Mazen said. “It’s going to happen. You know it, we know it.”

Of 18 buildings expected to be built in NorthPoint, three have been completed since 2003, councillor Dennis Carlone noted, later asking for DivcoWest to provide a rough building schedule like other companies overseeing PUD special permits.

Councillor Jan Devereux agreed that with another 2,493 units of housing promised within the next 13 years, “it seems pretty likely that come 2030 we’ll have a decision point, and I would expect at that time there’s another discussion.”

The so-called inclusionary housing rules have been stuck at 11.5 percent of units in big developments since 1998, but that figure is on track to jump to 20 percent. Not in NorthPoint, though, where the special permit was set in 2003 and locked in at the current rate, despite the fact that how much DivcoWest pays in incentive zoning – a fee paid per each square foot of construction where people won’t be living, such as office and lab space, also known as “linkage” – is set for the moment each building gets its occupancy permit.

Left largely unspoken was why about half of a 27-year construction window had been spent putting up only three buildings: NorthPoint has had a rough, halting transformation from decaying rail yard to innovation hub since 1996, with the original developers fighting each other in court; a group including Canyon-Johnson Urban Funds of Los Angeles and Boston’s HYM Investment Group taking over in late 2010; and DivcoWest jumping in to take the lead only two years ago in a $291 million deal.

The situation remains somewhat fragile, Divco executives say, even with expected infrastructure reimbursements of $25 million, and doubling the amount of affordable housing could shut down the project again.

“It would be devastating,” DivcoWest executive Tom Sullivan told the council last fall. “A change from 11.5 to 20 percent would reduce the value of our residential land nearly 40 percent … This proposal has already slowed development of NorthPoint.”

It is not an unusual statement from developers in Cambridge. Officials behind the Mass+Main project in Central Square told councillors in January that lowering their tower’s height would
“kill the project.” When Boston Properties pushed through a construction approval in a month in 2012, it was with the threat that Google would leave the city otherwise.

Mazen hoped to get Divco back before the council to find a way to raise the number of affordable housing units while still signaling support.

At current figures affecting residential construction, DivcoWest is expected to build another 286 affordable units to join NorthPoint’s existing 79. If councillors can get its affordable percentage to 20, joining other Cambridge developers, that could become 496 affordable units.

“Two hundred units? I’ll do anything that’s legal to get 200 units of housing,” Carlone said.

Admitting that, given the size of the project, DivcoWest “will probably have to come forward,” vice mayor Marc McGovern joined in the conversation about trying to identify the size of change that might bring DivcoWest back to the city for new approvals. As noted by Devereux, fellow councillor Craig Kelley, chief city planner Iram Farooq and city solicitor Nancy Glowa, it was really only certain “major” changes that would trigger a new review by city officials – and McGovern worried that Divco might not make a good change out of fear of getting saddled with a higher inclusionary rate.

Still, “I’m not interested in giving them a free pass,” McGovern said.

Devereux noted that by the time Divco was forced to come back to the city, the inclusionary rate “could be 30 percent.”

City officials were letting Divco off easy with an “oversimplification” of planned unit development rules, state Rep. Mike Connolly said during public comment. The rules provide relief to certain underlying zoning provisions, but by his reading that should not include inclusionary housing levels, just as it doesn’t freeze linkage-fee levels. “I respectfully ask you to take a closer look,” he told councillors.

From a planning and legal perspective, “zoning changes cannot affect projects that have [already] been issued a building permit or special permit,” Farooq said in a Feb. 8 memo, citing an opinion from Glowa. But it’s less clear where the NorthPoint zoning grants special permission to depart from “the normal requirements of the district,” as required by the state law on special permits.

Off to the Ordinance Committee

The entire issue is moving to the council’s Ordinance Committee for more more analysis.

In addition to pushback on affordable housing levels – with the notable exception of David Maher, now also president of the local Chamber of Commerce, and Tim Toomey – city planners heard direct criticism from councillor Leland Cheung, who said that on NorthPoint and other city issues, the Community Development Department was contributing to “confusion” by overstepping its bounds.

“The Community Development Department has been kind of taking over some of the policy-making,” Cheung said. “CDD, you’re not a policy-making body for the city. I want information to come back, I want options and to be informed, but in you developing that information I don’t want you directing the discussion toward one predetermined decision. I want that left to the council as a whole.”