Not glamorous, but needed infrastructure expected for NorthPoint from $25M bond 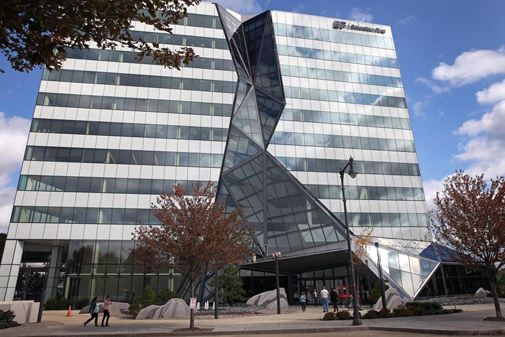 Not glamorous, but needed infrastructure expected for NorthPoint from $25M bond

Sewer capacity for more than one building leads list, as well as roads
By Marc Levy

Education First had to build its own roadways to its iconic NorthPoint building, and hopes for reimbursement through a state bonding program called I-Cubed. (Photo: Simon Design)

The NorthPoint neighborhood has come a long way since 1996, when ground was broken in what was then 42 acres of former rail yard wasteland off East Cambridge. But a bid for $25 million in state funding for infrastructure such as roads and a dedicated sewer connection comes at a crucial time for future development.

“Today there’s only enough sewer capacity for one more building,” said Shawna Sullivan, director of properties for Education First, explaining the need with some delicacy: “For amenities [such as stores and restaurants] coming online, some capacity needs are to be expected.”

Advocating for money that guarantees a neighborhood bistro or apartment building has restrooms where the toilets don’t back up “is not super glamorous,” Sullivan said, “but it’s a critical piece of the plan.” Without the infrastructure, tenants might be discouraged from moving in.

The $25 million would come through a program called I-Cubed that backs state-issued bonding for infrastructure costs – its full name is the Infrastructure Investment Incentive Program – but only when there’s state tax revenue already flowing to justify the effort. NorthPoint, where development around unused railroad tracks has made way for new tax-paying businesses and residences, is considered a perfect use.

No local tax money, such as property taxes, are used. The city’s only role is to be a state fallback for payment “in the unlikely event of a revenue shortfall,” as City Manager Richard C. Rossi explained last week to the City Council. “In this case, there is little to no risk” – because all EF tax revenue since May 2014 is counted toward the bond, making for an immediate $6.3 million surplus, and because city finance experts have been examining the deal since early 2013. With the millions in annual tax revenue EF generates, “the $25 million bond is projected to be ‘paid off’ by FY 2023 – a six-year payoff on a typical 30-year bond,” according to a city presentation.

In addition to new sewage capacity – which will help not just NorthPoint but also East Cambridge and Kendall Square – the I-Cubed bond will also pay for connecting utilities to planned buildings, and for roads, bicycle and pedestrian crossings, green space and to turn the oppressive, raised Monsignor O’Brien Highway into a welcoming, ground-level boulevard. “It’ll also pay for roadwork around the EF building that was completed last year. We had to go ahead and do it,” Sullivan said, “so I-Cubed will reimburse us for about $1 million.”

In fact, all of the I-Cubed money will be reimbursement, but for nowhere near the total amount of work required. The $25 million bond will pay back less than one-third of the $78 million being spent on infrastructure.

A decision from the state on whether to accept the $25 million NorthPoint bond request is expected in August, with issuance of the bond to follow in the fall. 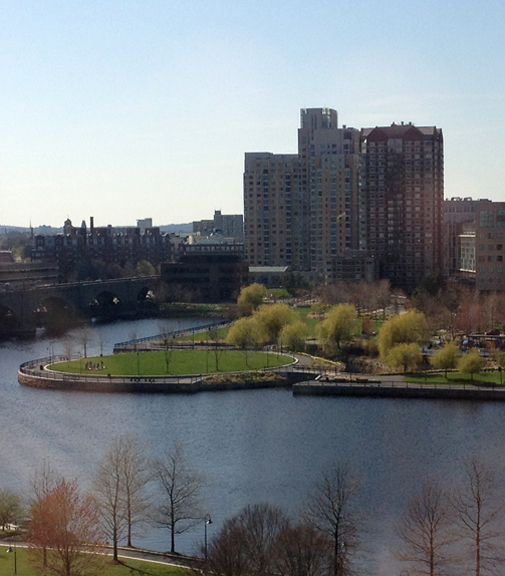 Education First is a language training and educational travel company operating in 112 countries but based in NorthPoint, where it has 1,000 Cambridge-based employees and 900 international students. Present at the birth of NorthPoint, the company now has outlasted several developers, becoming a de facto leader in ensuring the land becomes the mixed-use neighborhood envisioned decades ago when it was convinced to move in.

“EF is very proud to be leading the effort with the developers and working with the city,” Sullivan said. “We first broke ground in 1996, and there’s been a real slow transformation. The area was in desperate need of improvement, and the park was a figment of imagination. We’ve [worked] for 20 years for the area to be considered fit for our headquarters.”

“It’s very close to home. We live here,” she said. “Our goal for years has been to make the area into a true neighborhood.”

There have been improvements already in helping the estimated 75 percent of people occupying NorthPoint daily who walk, bicycle and use public transportation to get around, including a privately built connection to the Gilmore Bridge that saves time for people coming from Boston and the Community College orange line T station.

The area does not look to be growing in a way that’s friendly to drivers, though, Mayor E. Denise Simmons noted Monday. “I’m very appreciative of how it’s coming along,” Simmons said. “But you cant discourage everyone from driving. Some people need it.”

Sullivan believed that as the neighborhood and its public transportation and other connections grew, there would be fewer people needing to drive. But Iram Farooq, assistant city manager for community development, said that despite the neighborhood’s “multimodal” focus, Cambridge’s permitting process required NorthPoint’s major roads to be designed to meet city standards, including for on-street parking. “As we see the neighborhood evolve, we will see on-street parking as well,” Farooq said.

The one thing the I-Cubed will not do: ensure the Lechmere green line T stop is anything more than a simple shelter where once a modern, amenity-laden enclosed structure was planned.

The stop is to be moved into NorthPoint from its current East Cambridge location across Monsignor O’Brien Highway, but the station’s fate is tied closely to the languishing green line extension plan into Somerville and Medford. As the overall, seven-station project surged $1 billion over budget, expectations for the quality of the relocated Lechmere were all but extinguished. Even as Cambridge and Somerville prepare to give an unprecedented $75 million to help ensure the project happens, history may repeat itself and make the new Lechmere in the mold of the current one – essentially a giant shed with turnstiles.

The green line extension is separate from I-Cubed because it has to be demonstrated that without the funded infrastructure “there could be no development,” Sullivan said. “We took a very hard look at that, and though we all want a better Lechmere and the green line extension, we still have a station there today” – making improvements to the station technically unimportant in the development of NorthPoint.