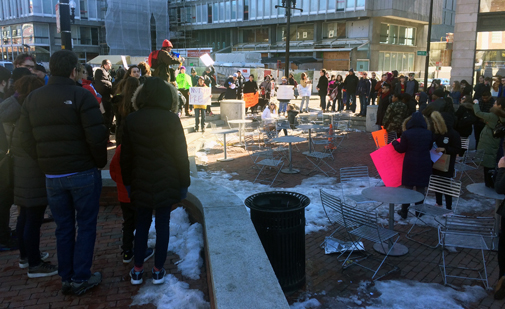 Tourists and protesters crossed paths Monday in Harvard Square for a Not-My-President’s Day rally, one of many held nationwide at the end of a long weekend.

The rally grew from about two dozen people to about twice that over the course of an hour, set up along the curving plaza and sidewalk around The Pit behind a red line T stop entrance, sometimes facing oncoming traffic and drawing supportive honks, and sometimes facing the small crowd on the other side.

By-now traditional chants about “This is what America looks like/This is what Democracy looks like” (and a custom “This is what Cambridge looks like”) were joined by newer rhymes directed at President Donald Trump and his policies: “Say it loud, say it clear/Immigrants are welcome here”; “The White House resident/Is not my president”; and “You’re orange, you’re gross/You lost the popular vote.”

The chants filled most of the hourlong rally, with a series of brief speeches coming toward the end.

Members of a group called Cambridge Area Stronger Together said they organized the local rally to show support for appointing a special prosecutor to investigate the Trump administration’s ties to Russia’s government; for the release of Trump’s tax returns; and the general goal of supporting “truth and government transparency.” The rally was publicized only late Sunday.

Some tourists streaming through this signature square in the “the People’s Republic of Cambridge” joined the rally, including one boy who announced he was from south Florida, and some seemed amused by it – but others were put out. “Let’s go,” a mother told her daughter as they crossed from the sidewalk in front of construction for Harvard’s Smith Campus Center. “It looks like we’ve got some liberals here.”

At one point, cries of “Trump!” and “Make America Great Again!” – a Trump campaign slogan – came from outside the circle of protesters. The source was a likely group of suspects: A pack of white, teenage boys who returned to gawk and snicker twice more before the rally broke up.

Harvard Square is reputed to draw between 8 million and 10 million tourists a year.