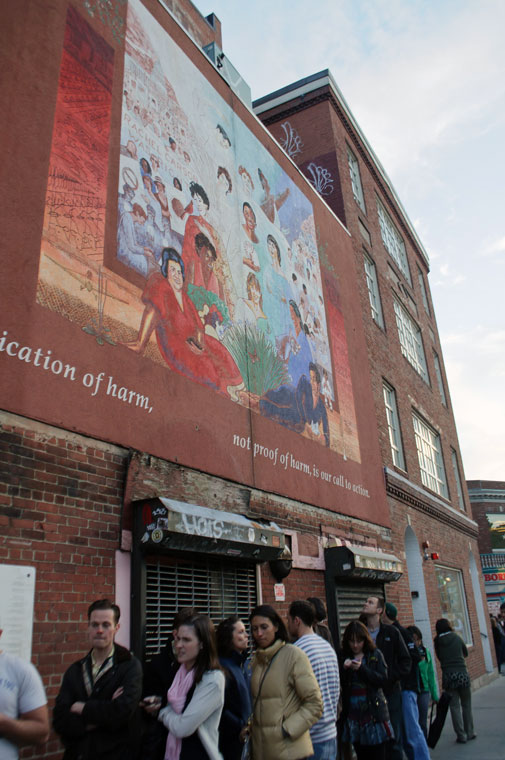 In an economic endorsement sure to dismay many, a survey of big foreign investors has moved Greater Boston back into their top five U.S. real estate markets after three years down the list – and the chief executive of the group funding the survey says Chinese investors aren’t even included among those polled.

The current list moves the region to the No. 5 slot, tied with Seattle but behind top-ranked New York and runners-up Los Angeles, San Francisco and Washington, D.C., meaning it’s tied for the fifth-most attractive place to spend by the largest international institutional real estate investors in the world. (New York is also tops globally, followed by London, Los Angeles, Berlin and San Francisco.)

It’s the 24th annual survey conducted among the members of the Association of Foreign Investors in Real Estate; in that time, Boston has ranked in the top five a total of nine times.

Drawing a direct line between the survey and the constricting Cambridge real estate market isn’t quite right, though, said James A. Fetgatter, chief executive of the association.

“Our members do not invest in residential properties, so you’re really talking about apples and oranges,” Fetgatter said, although he acknowledged that between 25 percent and 30 percent of members’ portfolios are large, multifamily apartments. “They’re not buying up houses.”

Multifamily and industrial were tied for first place as preferred property types in the United States, according to the survey conducted for the association by the James A. Graaskamp Center for Real Estate at the Wisconsin School of Business. Retail was third; office fourth; and hotels fifth.

It’s worth keeping in mind that member portfolios’ success benefits many invested pension funds,  Fetgatter said, and their investment could lead to greater employment opportunities in the cities targeted from overseas. In the survey, 60 percent of respondents said the United States was the country providing the most stable and secure real estate investments. Second-place Germany trailed at only 19 percent of the vote.

The pace of investment was likely to grow even faster with “recent legislation bringing welcome relief from certain [Foreign Investment in Real Property Tax Act] taxes,” he said in the association’s Monday press release.

The local trend was identified years ago, with Cambridge buyers and even renters reporting futile searches for homes in competition with mystery buyers offering above asking prices with cash, which demands less paperwork and hassle than dealing with a mortgagee. A Boston Globe article in mid-2013 said about a quarter of luxury condominiums were going to international buyers and included telling anecdotes – such as the one about “a man from Beijing [who] bought a $1.35 million, four-bedroom Colonial in Brookline for his 17-year-old daughter.”

In Cambridge, the big story since that time has been Gerald L. Chan, of Hong Kong and Newton, a billionaire who gifted $350 million to his alma mater, the Harvard School of Public Health, and went on a buying spree of more than $120 million in commercial properties in Harvard Square and residential properties throughout the city. The Chan family is backing restaurants replacing mainstays of the square that left after Chan bought their buildings: Parsnip, replacing Upstairs on the Square; Night Market, replacing Tamarind Bay; and Brake Fast, which was announced to replace Leo’s Place – although that location is still empty after two years.

Last spring Chan bought the old Church Street cinemas for $17.5 million, which is $11 million more than real estate firm Carpenter & Co. paid when AMC Loews shut the theater down and sold it in 2012, according to The Harvard Crimson. Plans for the building haven’t been announced, but some Harvard-area Chan purchases, such as the American Express offices by Winthrop Square, stay empty for extended periods.

But Chan’s swift move into Cambridge property isn’t reflected in the association’s survey of its nearly 200 members – investors listed as having $2 trillion or more in real estate assets under management globally.

“We only survey members of our organization, only institutions from 21 different countries, and China isn’t one of them,” Fetgatter said. “They keep things close to their chest” in China.

It was among the reasons he couldn’t address the stresses facing Cambridge real estate, he said.

“I know what you’re talking about, though,” Fetgatter said. “I used to live in Cambridge.”