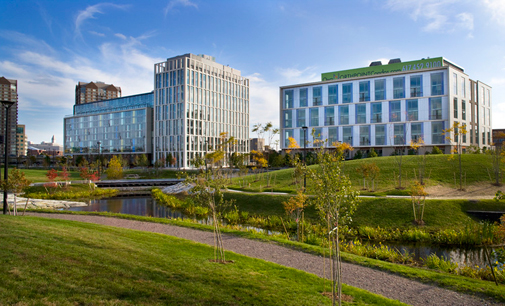 The Sierra and Tango condominiums in NorthPoint have some 79 affordable units between them. (Photo: HYM Investment Group)

With gross procedural confusion, the City Council advanced a slew of amendments to its 20 percent inclusionary housing ordinance Tuesday, including removal of a controversial section that would have meant more grandfathering of large developments at today’s lower rates.

None of the changes proposed now will affect the number of affordable units that will be built in the NorthPoint neighborhood and other existing, already permitted large projects called Planned Unit Developments. Those numbers are set by the zoning at the time those projects were permitted, and, per state law, can’t change unless the developers of those projects come back to the City asking for other changes.

While future PUDs will be affected (such as in the 14-acre Volpe site in Kendall Square), NorthPoint and other permitted developers will be subject to a rule requiring that 20 percent of the housing they build be affordable if and only if they choose to come back to the Planning Board for further amendments to their projects – something NorthPoint had been expected to do, but is now less likely to do because of the financial penalty associated with building 20 percent inclusionary housing instead of 11.5 percent.

The council has been working on ordinance for a year through its Housing Committee, since a consultant produced a nexus study in March 2016 that serves as the foundation for the 20 percent rate.

The bulk of Tuesday’s Ordinance Committee hearing was devoted to questions from councillors Jan Devereux, Dennis Carlone and Nadeem Mazen. The questions were primarily related to the application of the ordinance to the NorthPoint project, which was permitted in 2003 subject to the city’s existing inclusionary rate – with some confusion about whether that is 15 percent or 11.5 percent.

The hearing began with staff presenting recommended amendments from city planners, most of which were contemplated at a Jan. 4 ordinance meeting. They included an increase in frequency of the city’s review of the inclusionary requirement to every five years or fewer; a required annual staff review of the inclusionary housing program; lowering the size of a project required to create family-sized units to 30,000 square feet from 50,000 square feet, as recommended by the Planning Board; and minor wording changes on implementing regulation.

In the next part of the hearing, City Solicitor Nancy Glowa responded to Devereux’s four questions.

The first two essentially asked why the decades-long NorthPoint project would not have to comply with zoning current at the time of building construction. Glowa answered that state law makes it clear that the zoning enacted or advertised at the time of special permit issuance or amendment is what applies. Since the NorthPoint PUD special permit was issued in 2003 and amended in 2016, it is the 2016 zoning that applies to NorthPoint, even though individual buildings may not be constructed until 2030 or beyond. Glowa said she had explained this in her memo of August 2016. This time councillors seemed to accept what they had not accepted before.

Devereux’s third question: “What lack of progress would constitute grounds for a lapse of the special permit?”

PUD special permits cover large developments, typically in multiple phases over many years – NorthPoint’s covered 27 years, ending in 2030, Glowa said. A question of lapse would be determined by the Planning Board. She called it unlikely that the board would find a lapse at NorthPoint, “where three buildings have been constructed, and where the phasing requirements in the special permit do not say that if you haven’t built eight building by 2017 or by 2013, your special permit lapses.”

The council did not discuss the September 2016 amendment to the NorthPoint PUD granted by the Planning Board, and how that would make it difficult to find that a lapse had occurred in the ensuing few months.

“The broader issue is immunity for 27 years on the same project from any zoning change; to me that is the big-picture item,” said Carlone, who was chairing the meeting. “Something about the process seems very odd, and when we realize that it’s 100 to 200 extra affordable housing units in NorthPoint – that’s a big prize. And that’s why we’re all talking about it and concerned about the PUD comments in the existing petition.”

Devereux’s fourth question asked how the percentage of inclusionary units at NorthPoint was less than 15 percent for its first three residential buildings. Its special permit explicitly waived “gross floor area bonuses” normally allowed by the current inclusionary housing ordinance. It is the inclusion of bonus housing units, which are not generally “floor area bonuses,” that turns the current 15 percent on-paper requirement into an effective 11.5 percent actual requirement in most residential projects.

Chris Cotter, the city’s housing director, said the calculation was done the same way it has always been done in other projects.

“The calculation of the units was done as it has been for all PUDs since the adoption of the inclusionary ordinance in 1998. And that allows for the benefit of the bonus to be included in that calculation,” Cotter said. “So the net yield of units in NorthPoint to date, in the first three buildings, has been about 11.5 percent. I believe it’s 79 units total out of the 684 that have been built.”

Initially the council did not respond. An hour later, they returned to it, with Mazen asking Cotter to review the explanation again. “It just sounded to me like they opted in for the strictures of the affordable housing count but waived the benefit of the bonus, and as such should just be at a flat 15 percent,” Mazen said.

But Cotter reiterated that “the interpretation and the application of the inclusionary provisions in PUD districts has always been this way.”

Iram Farooq, assistant city manager for community development, added that “this interpretation predates all of us, and I think this is one of the reasons why it’s clear that the change in the ordinance to have a flat percentage and eliminate the complication of the calculation is a really wise approach.”

“That this interpretation predates us doesn’t make it sound,” Mazen replied.

The amendments presented by staff carried forward a pair of provisions previously presented in January, resulting from staff conversations with the Chamber of Commerce.

The second provision allows an existing PUD to be amended without triggering new inclusionary housing provisions subsequently enacted into zoning; but only if the amendment did not increase commercial space and did not decrease residential space. City staff have repeatedly explained that without this amendment, developers of an existing PUD would be reluctant to come and ask the Planning Board for mutually beneficial changes to a project, such as relocating a street or park to better respond to changing circumstances, because they would be forced to accept a higher inclusionary housing rate – costing them a lot of money. The result could well be worse projects.

The confused debate focused on the first provision, meaning there was no robust debate on the question of whether alterations to a project in the public’s interest would be compromised if developers were discouraged from coming before the planning board with amendment requests.

Throughout the procedural confusion and multiplicity of amendments, staff repeatedly tried to get clarification from the council as to what was being voted on. At first, councillors indicated a section of the Feb. 8 memo held the PUD provisions to be removed, but staff pointed out that was not actually proposed language. Ultimately the right citations were provided.

One of the consequences was that during debate, the council did not have in front of it the language being discussed.

The council’s rules, like those of most legislative bodies, require that there only be a single amendment on the floor at a time, and potentially an amendment to that amendment, but only if germane, and with no further levels. The council and city clerk frequently violate this rule, and the result is repeated and regular confusion about what is being debated and voted upon.

In this session, the council first moved to apply the amendments recommended by staff.

Before voting on that amendment, it passed a motion to apply a series of changes protecting low-income tenants recommended by Ellen Schacter, an attorney with Cambridge and Somerville Legal Services. Carlone then introduced an amendment to strike the PUD provisions from the staff text. Leland Cheung introduced an improper third-level amendment to Carlone’s amendment that would, “by substitution,” direct a council committee to meet with PUD special permit developers. Mayor E. Denise Simmons introduced an improper fourth-level amendment to keep the PUD language in the text and also to refer the item to a committee, very similar to Cheung’s motion.

Amendments that are “equivalent to … rejection of the original motion” is improper, according to the rules, but they were allowed.

While the fourth-level amendment was pending, City Clerk Donna Lopez asked the council to pass a motion asking the city solicitor to review the Schacter text, an improper fifth simultaneous motion. Carlone introduced the motion and it passed.

With Cheung’s amendment still on the floor, councillors discussed a suggestion to withdraw Carlone’s second-level amendment, on the basis of uncertainty of expected vote count. Councillor Tim Toomey repeatedly yelled out “call the question!” attempting to cut off debate. After initially seeming to fail in a voice vote, a roll call was taken and the motion to close debate passed, with Carlone, Devereux and Mazen voting against. Craig Kelley and David Maher were absent.

Simmons’ fourth-level amendment was then voted on and failed, with Cheung, Toomey and Simmons voting in favor.

Cheung’s third-level amendment, to retain the PUD sections, was then voted on and also failed, again with Cheung, Toomey and Simmons supporting it.

Carlone’s second-level amendment was then voted, to remove the PUD sections. It passed, with Marc McGovern as the deciding vote: McGovern, Carlone, Mazen and Devereux voted in favor.

The council finally voted to accept the staff recommendations as amended and to favorably recommend the adoption of the ordinance to the full council. Lopez said it would appear in a committee report March 20, which would allow the ordinance to be passed to a second reading, wait the two weeks required by law and be adopted April 3, one day before it expires.

Northpoint developers DivcoWest, which last year had expressed concern that an inclusionary rate increase would prevent the Northpoint project from moving forward, did not respond to requests for comment.

Schacter’s memo to the council recommended three changes to the ordinance that serve to protect low-income tenants. Its text was a revised version of what she had submitted in January, and which city staff generally felt was more appropriate for regulations rather than ordinance. The first, regarding income certifications, would address tenants who lose their jobs after having their income certified – important because inclusionary tenants pay a fixed percentage portion of their income. The second specified a minimum rent for six months for tenants in such situations. The third required that tenants not be denied affordable units based on poor credit scores unless they have a history of non-payment of rent.

All members of the council were present at the meeting for at least part of the time, with the exception of Maher, who now serves as president of the Cambridge Chamber of Commerce.