Blow of federal housing cuts may be softer, but Cambridge still suffers in Trump plan

Blow of federal housing cuts may be softer, but Cambridge still suffers in Trump plan 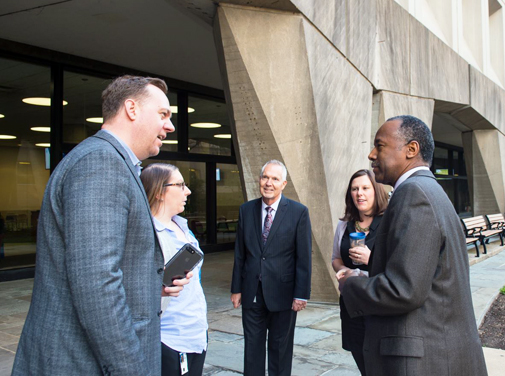 Ben Carson is greeted by employees as he arrives to lead the U.S. Department of Housing and Urban Development on March 3.

Mike Johnston, executive director of the Cambridge Housing Authority, called the proposed 14 percent cut in the federal budget for the U.S. Department of Housing and Urban Development “draconian.” Johnston said “many housing authorities will have a difficult time providing safe, secure and affordable housing with these proposed cuts to the operating and capital funds, and ultimately the ones affected will be the residents.”

The city’s other affordable housing programs, as well as job training, help for small businesses and neighborhood programs may suffer more. The reported federal cuts would eliminate Community Development Block Grants and “Home” Investment Partnership aid. City officials didn’t return emails and phone calls Thursday and Friday. According to documents posted on the city’s website, Cambridge received $2.5 million in block grants and $565,000 in the Home funds this fiscal year. Most of the money goes to affordable housing.

The Washington Post reported Wednesday that preliminary HUD budget documents indicated that two federal agency funds that support public housing operations and physical improvements may be cut deeply in the budget for the next federal fiscal year, which begins in October, and Community Development Block Grants and Home funds will be eliminated.

Overall, the federal agency’s budget could be reduced by more than $6 billion, the newspaper reported. Agency officials quoted in the story said the figures obtained by the Post were part of budget negotiations and could change.

Cambridge public housing may not suffer as much as other cities and towns because 1,477 public housing units here, out of a total of more than 2,000, have been converted to what’s called a Rental Assistance Demonstration program, Johnston said. The authority wants to revamp all of its deteriorating public housing developments under the program, which taps private investment and doesn’t depend on the federal agency’s conventional funding for public housing.

Still, the authority’s Section 8 rental assistance program, like others across the country, will be hurt even with minimal cuts of $300 million nationwide, reportedly in the HUD budget proposal, Johnston said. “Yes, they are ‘only’ taking $300 million from [rental assistance] vouchers, but that is on top of the hit we are already taking,” he said.

The vouchers let low-income families and individuals pay 30 percent of their income toward rent, with the federal government providing the rest up to a specified limit. Most vouchers are used in private housing, but RAD tenants also have Section 8 vouchers – tied to an apartment, not the tenant, and supporting operation of the program’s housing developments.

Last month Johnston warned that if federal voucher funding did not increase, the authority’s program would be short $3.2 million to pay for the program. That funding level “is not sustainable” long term, especially when the authority has already issued almost all the Section 8 certificates for which it has funding, he said.

Last week Johnston said the authority has not given out any new vouchers this year except for applicants who qualify for emergency help, who need to move because of disability or similar issues, or who have changed circumstances such as a job loss. It’s part of an effort to conserve vouchers, he said.

The authority reopened its waiting list to Section 8 applicants Oct. 3 after it was closed for more than eight years, but warned there would be few certificates to give out. As of last week there were 2,555 applicants on the list who have priority because they live or work in Cambridge or are veterans, and 4,683 with no priority, Johnston said. People continue to file applications.