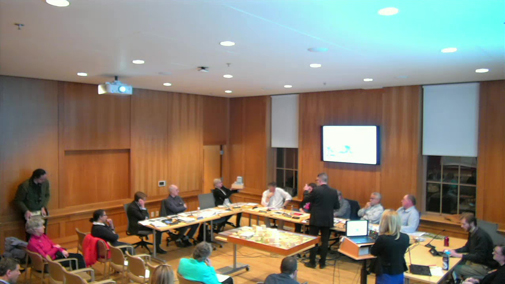 Planning Board members examine a model of an MIT building in a freeze frame from its livestreamed video March 7.

Cambridge quietly started livestreaming Planning Board meetings with a “soft launch” on Feb. 28. Recorded versions are saved and downloadable on the same site as City Council videos. The board meets on the second floor of the City Hall Annex at 344 Broadway, often three or four Tuesdays each month.

The video project has come somewhat delayed: in January 2015 then-city manager Richard C. Rossi listed it as No. 4 of seven “high-priority, short-term” board process improvements to complete in “zero to 18 months.”

The board has had a stenographer for years and produces transcripts, and the stenographer is required by contract to record audio and preserve the tapes for seven years, but Cambridge has never published that audio. Transcripts often lag by one or more months, although the contract requires them to be produced within five days.

The Planning Board video is low-quality. A single fixed camera is used for the entire room, and it captures the backs of presenters; board members are visibly but indistinct and fuzzy. Digital slide presentations are the centerpiece of most board meetings, but they are not visible. When presenters use pointers on the screen, the remote audience cannot see.

Sandra Clarke, deputy director of the planning department, acknowledged that slides were not visible, but suggested as an alternative that “we have provided a link to the application materials for online viewers.” 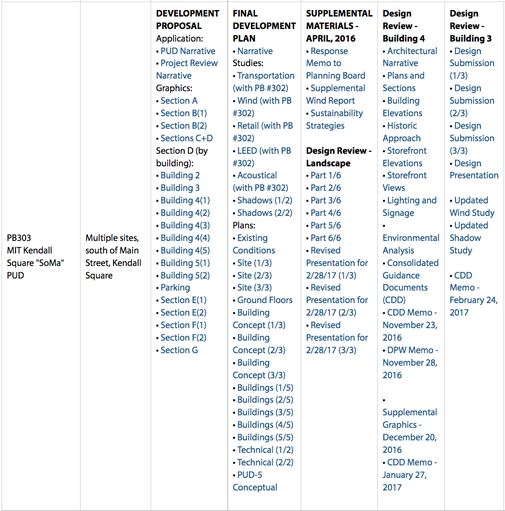 Finding the right link to materials for a complex development project can be challenging on the Planning Board website.

Those materials, available from the separate board meetings page, are usually different from the slide presentations given at meetings, and there is no way a viewer can tell what page of the application materials to look at. For complex projects it can be hard to even find the correct file. The video player page has prominent “Try it now! Click an agenda item on the left” text, but doing so merely opens the one-page agenda file, and offers no links to application materials.

Asked about split-screen, picture-in-picture, multiple cameras or simply switching between slides and camera video, Clarke said that “since we have just implemented this new feature, it would be a considerable undertaking to expand further at this time,” but the city would consider additional options in the future.

Some staff have suggested that they would be willing to switch the livestream between camera and slides, but the system was not engineered to give them that control.

Audio quality in the recording is good, except when presenters walk around the room, or staff and attorneys in the front row try to speak. The room has no wireless microphones, and the nearest fixed microphones are a considerable distance. Assistant City Manager for Community Development Iram Farooq has acknowledged the problem for several weeks, but additional fixed microphones have not been added. Farooq noted it was difficult to address immediately, as staff resources were consumed with preparation of the fiscal 2018 budget.

Nearly two years after the disastrous summer 2014 audio-visual renovations to the City Council’s Sullivan Chamber in City Hall were complete, and with nearly weekly complaints, the city is doing something.

The city is hiring HB Communications to address “the issues with AV/broadcast in City Hall,” City Manager Louis A. DePasquale told the council in an email Feb. 24. The system was originally designed and engineered by Acentech, working with LDa Architects.

“After reviewing the installation, their recommendation is to uninstall and reinstall,” followed by rigorous testing before recommissioning the system – a five- to six-week upgrade that could start June 27, the first day of council break, DePasquale said. “The target is to be operational for the summer council meeting on Aug. 7.”

The audio in Sullivan Chamber continues to be problematic at nearly every meeting, ranging from slightly tinny and echoing to nearly inaudible, seemingly unpredictably, with staff generally mystified and unable to do much other than reset the system, which only sometimes works.

Mayor E. Denise Simmons apologizes to guests regularly for the quality of the sound system.

In addition, there is no sign of the city’s promised closed captioning on streaming video, intended for use by people with impaired hearing.

Senior Center at end of summer

The audio system in the Central Square Senior Center, 806 Massachusetts Ave., has been the subject of complaint for years as well. It has fairly old ceiling-mounted speakers that crackle, hum and buzz. Its wireless microphones run out of battery regularly and stop working, but not before providing periodic thumping like an accompanying drum set.

The system was planned to be redone after Sullivan Chamber in 2014-15, but was delayed in part due to heating and cooling system work at the center, said Lisa C. Peterson, the deputy city manager.

Regarding the audiovisual redesign, “my intention [is] to be in construction at the end of July/August,” wrote Julie Lynch, a project manager at the Department of Public Works in an email status update to Peterson this week.