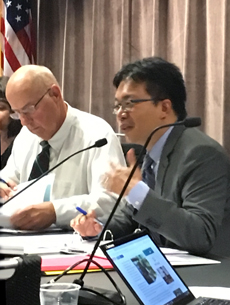 Superintendent Kenneth Salim speaks at a meeting of the School Committee. Its vice chairman, Fred Fantini, is at left. (Photo: Jean Cummings)

There was a lot of praise for Superintendent Kenneth Salim’s proposed budget from the public and School Committee members Tuesday, including its increase of classroom staff, full-time art teachers for all elementary schools and high school math teachers. There were also suggested improvements to sharpen language on help for upper school math, behavioral hot spots and increased high school enrollment.

Much of the discussion was around how the administration intends to use three additional reserve teachers and two reserve paraprofessionals and $115,000 added to an existing $25,000 for “tiered school support,” with committee members saying how those resources would be used had been left vague.

Salim pointed to these items as ways he intends to provide support to the Putnam Avenue Upper School – struggling with some behavioral and academic difficulties, including the district’s worst math performance; a difficult third-grade cohort at the Haggerty School; and a potential need for more teachers at Cambridge Rindge and Latin high school.

That wasn’t in the document, though, members said.

“We need better communication to parents” about how the resources will be used, vice chairman Fred Fantini said – and, indeed, several parents said during public comment they didn’t see the supports either.

Three Putnam Avenue Upper School parents reminded the committee of the Jan. 17 passage of a motion to provide help, spurred in part by public testimony Jan. 3. It’s the only state-identified “Level 3” school in the district – designating it among the lowest 20 percent of Massachusetts schools – and last year only one eighth-grader passed the Algebra I math test. The parents’ request included the co-teaching model used successfully at Vassal Lane Upper School after struggles there, and in sixth-grade math across the district.

“We are disappointed that nothing appeared in the budget to support that motion,” parent Pete Lebetsky said.

Relatedly, Vassal Lane parent Kelly Dolan asked that the districtwide math program, particularly in the middle schools, be “finally” addressed. “Without additional resources and with the growing number of 20-plus class sizes in our upper schools and high school, it’s a mystery to me how the district expects to get measurably different outcomes,” she said, pointing to years of standardized scores showing little improvement, in a world where math skills are increasingly important in the vast majority of jobs.

Salim reassured that he is “anticipating” being able to provide co-teaching for core subjects at Putnam Avenue next year using tiered support and reserve teaching resources in the budget, if necessary, and hinted it may be a pilot for the other two upper schools. “We are using the same approach [as Vassal Lane] in terms of mapping schedules of students and teachers” to achieve a co-teaching model, he said. But the schedule timing doesn’t line up with the budget timing, he explained, so the plan isn’t complete. “That’s precisely why we have reserve teachers as well as the tiered support pieces.” The hope, he said, is that it will be budget neutral; the extra funds and reserve staff are backups.

Similarly, administration hopes to beef up the summer math program, which has had lackluster results, and to continue the program at Putnam Avenue, although open to students across the city. Deputy Superintendent Carolyn Turk said the summer program is under review, and “there will be changes in what is offered and delivery models and teachers,” although she was not specific.

Likewise, the Haggerty School second-grade cohort described by parents as “challenging,” which was granted an extra teacher over the past two years to make three smaller classrooms, does not have that third teacher funded in the budget for next year. “We recognize it’s hard to predict right now what the needs of that classroom might be next September,” Haggerty parent Carol McGill said during public comment, “but we need reassurance that if, when you have clearer picture, you can find resources to fund intervention that has proved to be really successful this year.”

The help will be there, Salim said. A part-time social worker is in the budget, and he assured that “we will continue to monitor and staff the school based on needs in the students in the cohort, and [I] point to reserve teachers and tiered support as ways to … make a change if necessary.”

Committee members agreed the intentions should be more explicit in the document. Salim seemed amenable.

Amigos parents presented a letter signed by 140 families requesting an additional paraprofessional, as well an additional full-time special educator, for a “challenging” second-grade cohort they feel needs more help. Extra staff has been added piecemeal over the past two years.

CRLS physics teacher Kris Newton pleaded for additional science staff. The one additional science teacher in the budget “puts us back to where we were last year,” she said, despite sharply higher enrollment. There are ninth-grade students, she reminded members of information from an untelevised high school staff roundtable, that have not been able to take a required physics class despite needing to take a state-standardized test that year. In addition, she said, 108 students had “unfulfilled science class requests” for next year. Patty Nolan reiterated Newton’s concerns and pressed for another look at high school staffing.

Even as Salim’s supports became more clear, committee members worried whether the resources set aside were sufficient.

“I think it’s necessary to increase the number of reserve teachers based on what we hear from Amigos and Haggerty,” said Fantini, to broad agreement from the committee.

Member Manikka Bowman focused on the tiered support allocation. “Is that budget allocation enough?” she asked. “If we want the public on board with this strategy” of having resources in reserve to target as needed, she said, they need to be assured there are sufficient resources. She praised the “proactive” approach of anticipating and planning for needs, but said “we need to be more frank about how we will address those challenges.”

“We often asked ourselves, is $140,000 enough for tiered support,” Salim responded. “This is a pilot of a concept” of anticipating budget needs, he said, “and we are not sure yet what it will take.” He assured her there are other funds in the budget to augment the $140,000 set-aside.

Outcome measures, identified as insufficiently concrete by members last week, will be developed intensively over the next few months, Salim said. Likewise, strengthening family engagement in the upper schools is continuing as individual schools identify their needs.

An additional budgeted CRLS guidance counselor garnered praise, but Salim called next year “a bridge year” during which they will keep analyzing department needs there and in the upper schools.

Member Emily Dexter worried that Level Up, which breaks down “tracking” of students in English classes, and the 1:1 initiative to give all students access to Chromebooks during school, was too much on the plate for ninth-grade students and staff, and urged that 1:1 be delayed. Salim said both initiatives have been in the works for months, including through professional development, and felt the school was well prepared. Dexter also repeated arguments that elementary schools should have additional classroom teachers, and that co-teaching models should be expanded. To pay for this, she offered a list of potential budget cuts that would include postponing one partnership expansion and re-assigning the full-time building substitute at the High School Extension Program to a position elsewhere in the district.

Member Kathleen Kelly noted that a “number of times” there have been second- and third-grade cohorts identified as “having a difficult time” – seemingly close to tagging curriculum or classroom structure as a cause, but instead noting her experience of being in a class labeled “difficult” and ending by wondering if in her case it was the the principal’s problem, not the students’. She worried about “labeling a group of students. It’s so important in how we talk about it, because it’s going to lead us to how we address it.”

Among other issues raised in public comment, Cambridgeport School building substitute teacher Jake Crutchfield had suggestions about improving diversity in staff hiring: In the short run, focus on hiring among substitute teachers, which is often a pipeline for attracting full-time staff; in the long run, the district should target certain students to “empower and encourage them” to consider teaching as a career.

CRLS math teacher Ross Benson joined Newton in worrying about math and science space constraints. Labs and classrooms are full, directly affecting the ability to serve student need and demand, they said. This is not the first time the committee has heard that the high school, rebuilt in 2011, is tight. Enrollment is more than 25 percent higher than in 2008-09, when renovation planning began.

Chandra Banks, conflict mediator for Cambridge schools, requested staff support for her one-woman “restorative practices” mediation and training program for students and adults. She hoped to move into broader “school culture” work and go beyond the high school to include younger students, similar to an iconic program in San Francisco.

Concerns from a previous hearing about “underprivileged” advanced learners who remain unidentified were repeated by parent Jacob Barandes. Calling it a social justice issue, he urged an early screening system, more specialized interventionists and additional staff beyond Paula Feynman, the academic challenge and enrichment manager.

Parent Yaminette Diaz-Linhart raised an issue about busing for special education students heard in previous years from leaders of the Cambridge Parent Advisory Council on Special Education. Detailing problems, including constant changes in bus schedules without communication, missed stops and children dropped in the wrong place, Diaz-Linhart urged that the bus contractor – a different provider than the regular yellow buses – be reevaluated.