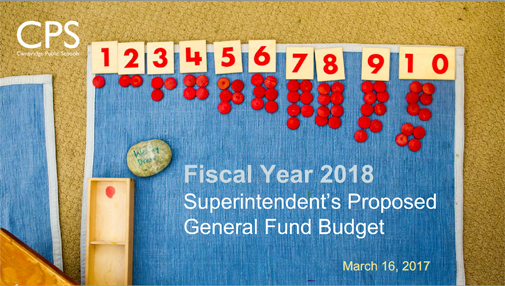 Superintendent Kenneth Salim unveiled his first proposed budget at the School Committee meeting Thursday, for which he received a round of applause from members. Benefiting from a $10 million increase in property taxes granted by City Manager Louis A. DePasquale in February, the total budget for next year rises to $183 million. Next year’s enrollment is projected at nearly 7,100, nearly a 10 percent rise in five years – most of it showing up in spikes in kindergarten and ninth-grade enrollments. The majority of the $10 million increase goes to adjustments to simply maintain district programming under increased enrollment, but it includes $945,000 in new initiatives.

There were few surprises to committee members – a change in practice from former superintendent Jeff Young’s tendency to hold folks in suspense until the draft was released. In budget workshops and roundtables, Salim had indicated his intention to begin a pilot for elementary world language, boost support for social-emotional work, increase staff diversity and target funds at the Level Up initiative to de-track ninth-grade English classes, for example.

But if Salim had not mentioned major changes in the past weeks, it didn’t show up in the budget. There is no increased co-teaching, no deliberate changes in class size – outside of ninth-grade English – no family liaisons for upper schools, for example, all among items asked for in public comment by many staff and parents. Those may or may not come after completing a program review of elementary and upper school programs, being launched with a $50,000 set-aside in the proposed budget. There were several adjustments that addressed a series of areas long subject of staff and parent concern, though.

Key changes in the budget include modest increases in high school staff, long a hot point in public comment noting that school enrollment has jumped. An untelevised roundtable on high school staffing revealed several department heads feeling understaffed. The proposed budget increases the Cambridge Rindge and Latin high school staff by adding two math teachers, one science teacher, one health teacher and an additional guidance counselor, all attributed to enrollment increases. Next year, the school’s enrollment will top 2,000 students, rebounding from a low of 1,550 in 2008. (CRLS’ enrollment was over 2,000 in 2001-02, but as enrollment started to fall, there were staff cuts that haven’t fully been restored.)

In addition, four teachers will be hired to support the Level Up program that will see all ninth-graders in honors level English classes, some with an additional yearlong “Honors Access” support class and summer courses. One new English teacher and three new special education teachers, along with the reorganization of the staff teaching several honors and “college prep” classes, will allow the school to staff the new configuration, Salim said, and achieve smaller class sizes. There will be stronger “split co-teaching” – that is, co-teaching for a portion of weekly class hours – with special educators better integrated into individual classrooms, he said. These positions are in addition to existing professional development and student support resources now focused on Level Up.

Click on the image to see the superintendent’s budget proposal presentation given Thursday to the School Committee.

Adding a guidance counselor brought praise from committee members, with several wondering aloud if one is enough. At the staff roundtable in December, Coordinator of Guidance Lynn Williams listed several challenges, especially at the beginning of the year when seniors are “in great need” for help on college searches at the same time one-quarter of the students are new to the school. A major goal is to meet with every first-year student before their first progress report, but they have been unable to do that the past few years, she said. When she started in 1997, Williams had a caseload of 170 students, she said; today it is 250. This affects students at all academic levels, she said. She used to do small group work with students with C average or below to address their needs. “Now we have only done [group work with] failing and below students,” she said.

Tuesday night, members called for a comprehensive review of all guidance at the high school – including services offered through partner programs such as Breakthrough. “I think guidance will need more until we figure out if we are delivering services the right way,” said Richard Harding, recalling Williams’ “powerful presentation.”

“I support the additional counselor,” agreed Patty Nolan, “but I don’t know if we need one, two or three.” Kathleen Kelly also expressed concern about the high school guidance support, and added that she would like to see guidance start in eighth grade.

Resources are going toward a single-grade pilot program for elementary world language in two schools, not yet identified. In addition, sixth-graders in Putnam Avenue Upper School will be allowed to continue Chinese-language study through the hire of a teacher. Both proposals include curriculum development funds.

A January plea from part-time art teacher Jeff Konigsberg, other staff and parents was answered through the addition of two full-time equivalent positions so all elementary schools have a full-time art teacher. Some elementary school art teachers were shifted to part-time in some smaller schools with the start of the Innovation Agenda, in part to help fund the initiative that added middle schools to the district, as well as being a way to improve equity by trying to make every teacher’s caseload more or less equal. The downside to having teachers traveling across schools and schools’ not having an art teacher available all week seems to have outweighed the problems of some teachers having more than 100 more students than some others.

Enrollment increases also trigger other hirings, including regulation-required increases in staffing for English-language learners and the autism disorder program, as well as a school psychologist for Cambridgeport School, special education teachers for the Baldwin School and the high school, an occupational therapist and a social worker. Some of these positions started in the current year, but are fully funded in next year’s budget.

There will be two new kindergarten classes, based on the high January lottery enrollment, although their location is not certain. Fletcher Maynard Academy and Kennedy-Longfellow School are each getting another fifth-grade classroom, while the extra second-grade teacher at the Haggerty School, added to help manage a cohort with exceptional needs, will not be carried over to the third grade, which will certainly disappoint parents who asked during public comment for continued support. Nolan asked Salim for information on this decision for a future meeting.

The Haggerty, Cambridgeport, King Open and Peabody schools are each getting another paraprofessional due to large first-grade cohorts, and Amigos will keep its third-time math teacher. The Tobin Montessori “Cubs Corner” – an optional extended-day program for 3-year-old students – will get a half-time instructor to meet growing enrollment, something committee member Emily Dexter noted as: “enhancing a preschool while we have a lot of kids who can’t go to a preschool. I wish we could see more of that in other schools.”

Other changes include updating some computer and whiteboard resources; increasing discretionary school-based “improvement funds”; increased funds for partners Cambridge School Volunteers and Tutoring Plus (with all others funded at current levels); increased funds for athletics; about $100,000 more for building maintenance; and money to increase bus field trips to the Maynard Science Center.

Programmatic initiatives include “train the trainers” staff professional development on making cultural competency part of the classroom; starting anew a program to attract and keep teachers of color, partly through focusing it in the human resources department; extra financial and targeted coaching support for schools facing unusual behavioral problems; more funding, professional development and school-based coaching for social-emotional learning and a system of instruction and assessment called Response to Intervention. Ninth-graders will each have a Chromebook to work with next year; funds are earmarked for the hardware and an additional technical support person. There will be a small pilot-program testing whether the Chromebooks can go home with the students at night. Finally, Salim is starting a review of elementary and upper school programs next year, and instituting a “Design Lab” to “leverage innovation already happening in our schools” through research and replication.

In addition to $945,000 going to new initiatives – all, Salim said, will have budget implications in coming years – the other enrollment-based adjustments add up to about nearly $3 million. Where is the other additional $6 million going?

The budget begins with the current year’s $172.8 million cost of running the schools, with salaries and benefits accounting for more than 80 percent. Cambridge’s “maintenance budget” approach starts with that figure and makes adjustments based on cost-of-business increases and enrollment changes to get next year’s base budget. Salary-related cost-of-living adjustments and contract-determined salary increases and benefits will add $4.1 million.

As in recent years, out-of-district special education costs for children whose needs cannot be met by the city’s schools is a big-ticket item. Total projected costs are $9.4 million, an increase of $1.6 million over what was budgeted for the current year. Some of this increase was triggered during this school year and is anticipated to continue next year. The struggle to control and better anticipate out-of-district costs has been the subject of many School Committee meetings. With assistant superintendent Victoria Greer’s departure at the end of the school year to lead the Sharon schools, that challenge will fall to her unknown successor.

Student transportation is another expense driving cost increases. Next year’s bill for providing buses is expected to be $8.4 million, an increase of $1.2 million over what was budgeted for this year, and a 35 percent increase over bus costs in 2014-15. In addition to a sharply higher contract for regular bus service, specialized transportation costs for special education, vocational and homeless children have also increased considerably.

Committee members responded positively to Salim’s presentation, particularly his clear alignment of 11 new initiatives to four strategic objectives: equity and access; teaching the “whole child”; capitalizing on innovation and partnerships; and implementation and program monitoring. Member were also glad to see Salim include implications on future budgets of his initiatives.

Manikka Bowman, Harding, Kelly and Nolan asked that language on measuring outcomes be strengthened, with Nolan and Harding calling the language outlining some program goals and objectives too “vague.”

“You may not be at a point yet where you have concrete objectives and goals,” Bowman said, “but it will only make this document stronger if there’s possibility to get there in time for the [final] budget.”

Kelly was the only member to raise the impact on the budget of any changes in federal or state aid, striking on the evening of the release of details from President Donald Trump’s proposed budget slashing many government programs. Salim’s budget notes that Cambridge gets $7.5 million to offset some out-of-district special education costs from the state Circuit Breaker reimbursement program and from the federal Disabilities Education Act Grant. In addition, the budget notes, the district anticipates $13.4 million in state Chapter 70 aid, $8.3 million in general state aid and $1 million in Medicaid reimbursement.

Members were invited to relay comments and questions to Salim for future discussion.

A public hearing on the budget precedes a regular School Committee meeting Tuesday. Immediately following, there will be a budget workshop, which will be televised. March 28 is reserved for a budget workshop “if necessary.” The committee is scheduled to vote on the budget at an April 4 meeting, with transmittal to the City Council for approval in May.