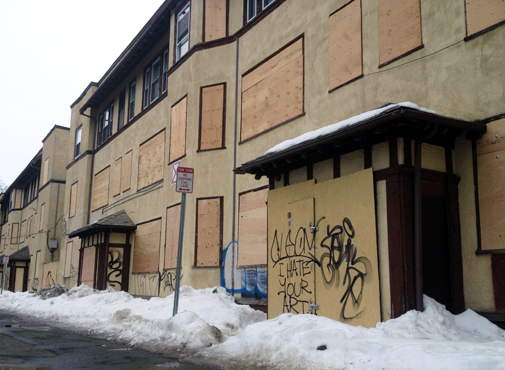 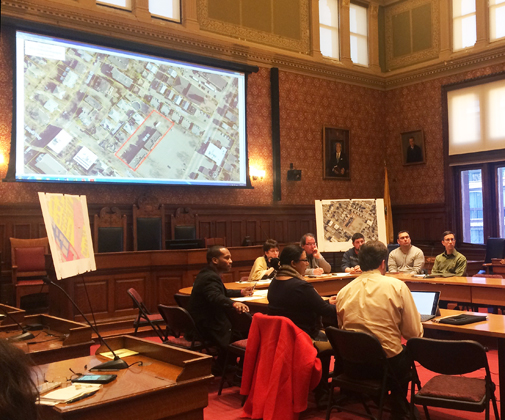 City officials and staff hear public comment about the future of Vail Court at a Thursday meeting at City Hall. (Photo: Marc Levy)

Neighbors of the blighted Vail Court hoping to see it turned into a park and community garden went away chastened from a community meeting Thursday, as residents, housing advocates and finally city officials rejected the idea in favor of the original plan: affordable, senior or transitional housing.

The 0.65-acre property at 139 Bishop Allen Drive, a block from Massachusetts Avenue and the heart of Central Square, was taken in October from family members who’d spent the better part of a decade in court squabbling over ownership and eventual development rights, leaving the site empty and decaying in the meantime. The council freed up $3.7 million to give the owners in return for the land taking.

While it had been announced then that affordable, senior or transitional housing would go up on the property – now some 24 rat-infested apartments between two boarded-up buildings, and a parking lot for around 45 cars – a group called The Neighbors of Vail Court hoped otherwise. The group includes the lot’s 40 closest abutters.

“Many of the abutting residents still see it as still open for discussion as to what use will be decided,” member Curt Rogers said, describing a poll of the group that found an “overwhelming” interest in green space, led by community gardens. The nearest such site is a half-mile away, while the area “already abuts substantial transitional living units at the YWCA and affordable housing units … it is a real concern that more affordable or transitional housing could affect the balance of the neighborhood.”

As a public comment period went on and neighbors interested in green space alternated with housing advocates, residents of affordable housing and others noting the city’s ongoing housing crisis, the message moderated. Neighbors said they hoped housing would at least be built to the same footprint and height of the lot’s current structures, instead of as a tower blocking views and casting shadows on surrounding homes – especially with the prospect of development looming for vacant parking lots on Prospect Street next to Vail Court.

But opponents of affordable housing were outnumbered, and their plea for more green space seemed overwhelmed by the testimony of housing advocates, including a Housing Authority official who noted that more than 8,000 people flooded an application process for a few housing vouchers when the list opened in October after eight years.

The 24 units of Vail Court, near Central Square, have been empty for more than a decade. (Photo: Marc Levy)

The first speaker was Eva Martin Blythe, executive director of the local YWCA, which takes in women and children who would otherwise be homeless and tries to help them live independently.

“It’s becoming harder and harder to empower women with access to safe, affordable housing when access to that housing continues to dwindle almost in front of our eyes … We’re good, but we can’t do magic. We can’t assist more families when we can’t move families out because the affordable housing resources simply don’t exist,” Martin Blythe said.

“Our expectation is that the city will follow through with its original intent,” she said.

Abra Berkowitz, a teacher at a two-year college in Boston, acknowledged the need for green space and felt the Vail Court lot could include some. “But if you think about the ramifications of providing affordable housing, you can’t not,” she said, pointing to the need for homes for people holding lower-paying jobs, such as at coffee shops, that improve the quality of urban life. “A hundred percent affordable housing is very important for the site. The opportunity doesn’t come around a lot. You can say ‘somewhere else,’ but where somewhere else?”

City councillors were blunt in rejecting a different use for the site but quick to point out ways Vail Court could be made to work for everyone, including through architectural tradeoffs that would mean a taller building surrounded by more greenery. Nadeem Mazen advocated building a community garden on the roofs of housing, and for small-scale retail or an anchor tenant as part of the ground floor. Jan Devereux suggested parking needs could be minimized by looking at the site as a transit-oriented development only a few minutes’ walk from a T stop. It could mean less parking, built underground, she said.

The first step is demolition. Deputy City Manager Lisa Peterson, who led the meeting, said the site is being assessed for safety and found to have some hazardous material that will have to be remediated. The city has approval in hand from Inspectional Services to demolish, and is going out to bid for a company to do it.

A bidder should be selected by April 27, with demolition following in June. Another community meeting will be held beforehand to discuss the impacts of demolition and “continue the dialogue,” Peterson said.