Residents Alliance’s concession on donors doesn’t give ‘all that much,’ councillor says

Residents Alliance’s concession on donors doesn’t give ‘all that much,’ councillor says

Kelley unimpressed by group vow to give names, range of amounts
By Marc Levy 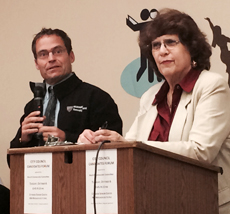 With election season coming, the nonprofit Cambridge Residents Alliance has taken a step toward ending a recurring controversy over its donations. The city councillor on the other side of the debate isn’t impressed.

The bitterness of the 2015 elections bled into the current two-year City Council term when councillor Craig Kelley compared the Alliance to the National Rifle Association in its use of so-called “dark money” – a hot-button term usually associated with funders such as the billionaire Koch brothers, who can spend in the hundreds of millions in a single campaign year, and national-stage lobbyists such as the NRA.

“A 501(c)(4) doesn’t have to report donors … The NRA is one of those places money comes. The Cambridge Residents Alliance is a 501(c)(4),” Kelley said at an April 2016 council meeting. “I tried to find its most recent report and failed, to see how much money they poured into the most recent campaign. I don’t know if it was hundreds or thousands or whatever. I don’t know where those donations came from.”

In February, the Alliance quietly added an announcement about “Finances and Donations” that put its total expenditures in each of the past three years at less than $5,000 and said the names of donors and the range of their donations – though not individual amounts – would be listed in its annual report and available online.

The Alliance had already said how many donations it got within several dollar ranges, as well as identifying the median annual donation, said Lee Farris, vice chairwoman of the Alliance.

It couldn’t do more until recently because the group had to respect previous fundraising hadn’t given explicit warning to donors that their contributions would be public, said Jonathan King, a member of the Alliance’s executive committee. The new policy kicked in upon announcement.

But just as the existing approach wasn’t satisfying to Kelley, neither was the latest step.

“This is something – but is it enough? No. It’s something. Clearly, they are concerned about something, and I don’t know what it is they’re concerned about, but this doesn’t tell me all that much about where their money is truly coming from,” Kelley said.

But the councillor also gave a theoretical example of what bothered him about Alliance reporting that the group had made impossible, dating back years: that a $6,000 fundraising total could come from a theoretical 30 donors, with 29 donors giving $5 apiece and the final person giving the remainder, which would be “a different story than if 30 donors were all giving some equal amount.”

Kelley didn’t get an Alliance endorsement in the past election. The group opposes development it feels will gentrify neighborhoods or add to traffic and transit congestion, and its endorsements go only to candidates who refuse campaign donations from “large developers” – a category of candidate from which Kelley removed himself a couple of years ago. In 2015, he accepted $4,575 in campaign contributions from people self-identified as being in real estate, according to state Office of Campaign & Political Finance records.

The group made $548 contributions that year to candidates it endorsed, including councillor Dennis Carlone and candidate Jan Devereux, who won a seat on the council.

“Given the tens of thousands of dollars donated by real estate interests over the years to city councillors, it is difficult to believe that councillor Kelley was truly concerned about residents’ contributions to the Cambridge Residents Alliance,” King said.

As an officer involved with fundraising, King said he could “affirm that leaving out exact dollar amounts is not a mechanism to cloak nonexistent very large donations, but to protect people who would be embarrassed by the small size of their donations.”

The published reports will make that clear, King said.