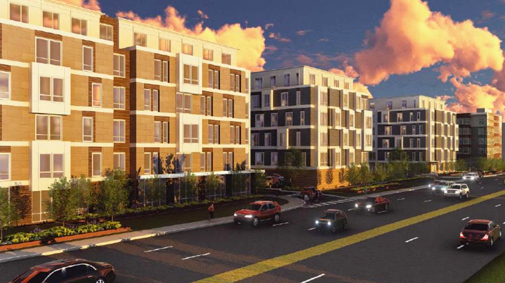 Traffic, pollution and flooding called a concern for both communities
By Bob Sprague

Neighbors opposed to an apartment project planned for the site of the Lanes & Games bowling alley and Gateway Inn motel have asked the Arlington Redevelopment Board to take a position on the proposal.

The project, called The Residences at Alewife Station, would add 320 units in two six-story buildings to the fast-growing neighborhood. There would be just over 240 parking spaces.

Madeleine Aster, a member of two North Cambridge neighborhood groups, has urged the town board to support an appeal of what she calls “a reckless decision made by the Cambridge Planning Board” allowing the Criterion Development Partners project in the Alewife floodplain.

In a letter, Aster asked Arlington planning director Jenny Raitt and board members for further study to see how the development will affect Arlington. Raitt says she expect the board to consider the request Monday, before a Town Meeting session.

The most recent case in which the town board commented on a proposed development in a neighboring community was for the Royal Belmont upscale residences – formerly called Acorn Park, a Belmont Uplands development slipped in under state affordable housing rules in 2015. In 2006, Arlington’s Redevelopment Board wrote a letter opposing the project, though in March 2014, selectmen voted to table indefinitely a letter of concern about the project’s impact on the Silver Maple Forest.

Traffic concerns, the presence of lead and asbestos at the 195-211 Concord Turnpike bowling alley and motel site, as well as a state rule prohibiting residential uses there since 1997, warrant further study for how it will affect neighboring areas, said Aster, a member of the Fresh Pond Residents Alliance and North Cambridge Stabilization Committee. Flooding has long been a concern in the area, though, and Rich McKinnon, a developer advising Criterion, said construction has been planned with flooding in mind.

But Mike Nakagawa, a Fresh Pond Residents Alliance member who is on Cambridge’s Climate Vulnerability Working Group, presented a worrisome picture of the flooding that could face residents of the proposed apartment building, which he based on a Federal Emergency Management Agency flood map for the area. With a 100-year flood elevation put at 6.8 feet, a “1 percent flood” from sea-level rise and storm surge for 2070 would inundate the area up to 10.9 feet, he said, meaning “roads leading to Lanes & Games will be under four-plus feet of water.”

“How are emergency services going to reach in time? How about fire trucks if an electrical fire starts?” Nakagawa asked.

The project’s design addresses zoning needs for building in a floodplain, Planning Board members have said.

The proposed Criterion development would face property across busy Route 2 where 219 units have been planned on the 17-acre Mugar site in East Arlington. That project remains on hold as the town’s zoning board appeals the state’s rejection of a calculation for affordable housing – but the environmental concern is that the project worsens flooding risks by taking away 42 percent of the site’s wetlands. The proposal for the site, called Thorndike Place, is by Cambridge-based Oaktree Development.