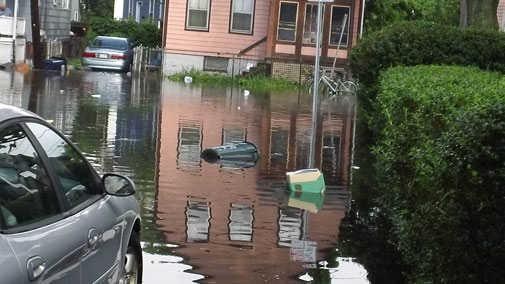 Planning will assume a ‘fundamental shift’ in climate that will have ‘profound implications’ for building design, quality of life and more, a memo says.
By Marc Levy

A November photo from the Fresh Pond Residents Alliance shows flooding in the Alewife area, which has been called “an early action item” in a citywide master planning process.

A citywide development master plan is expected to take three years to accomplish, said Iram Farooq, acting assistant city manager for community development, in a memo to be presented at Monday’s meeting of the City Council.

Action on the Alewife area, which is prone to flooding but has also seen a flood of construction in recent years, “will be an early action item,” according to Farooq’s report. “The Alewife area study will need to be closely coordinated with the climate change preparedness and resilience plan [and look at the] impacts of recently approved major projects.” 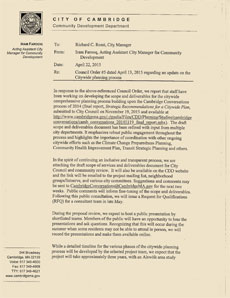 A 23-page memo from the Community Development Department discusses the upcoming citywide master plan process. Click to go to a PDF of the memo.

The citywide planning process is expected to start in September and “take approximately three years,” ending sometime in 2018, said the memo, which came in response to an April 13 request by councillor Marc McGovern.

The process isn’t just about the height of buildings. “Many cities nationally are shaping their own planning processes to address topics that are most relevant, with a particular emphasis on sustainability, engaged shared effort and cross-cutting themes and values,” Farooq’s memo says. “This approach, which is also being piloted by the American Planning Association, interweaves the traditional topics – transportation, land use, housing, etc. – in more meaningful ways with a focus on long term sustainability – social, economic and environmental.”

Alewife has become an early focus because last year brought more than 1,000 apartments to the area, surpassing the amount of development expected by 2024 in the city’s decade-old Concord-Alewife Plan. Still, some 1,500 more are due to be finished this year.

Essentially all of the development has been residential, rather than a mix of housing with office, retail, municipal and open spaces that, as the 2005 plan described it, would result in “a neighborhood ‘heart’ for people who live, work, play, and shop in the area … overcoming barriers and establishing much-needed connections to create a walkable neighborhood.” (A pedestrian bridge over train tracks first proposed in 2005, then awarded $375,000 for a feasibility study in 2013, gets a mention in the memo.)

The city’s lack of control over already congested car traffic and aging and crowded public transportation adds to the urgency in Alewife, and Farooq’s memo also calls for a focus on stormwater management – something sure to relieve residents who have been sounding the alarm on Alewife flooding as builders have targeted water-absorbing forests and open space in Cambridge, Belmont and Arlington. On Thursday, a group called for volunteers to protest plans for the 17-acre Mugar site along Route 2 in East Arlington.

Cambridge’s citywide plan is to assume “a fundamental shift in our basic climate parameters, away from the historic New England patterns to those more akin to southern regions of the country” that include sea-level rise, more storm surge flooding, higher temperatures and longer heat waves that together have “profound implications for building design, infrastructure, energy, mobility, public safety and health, the economy and quality of life,” the memo said.

Whoever leads the process will have to “coordinate closely with other consultants engaged by the city … to avoid duplication of efforts and effectively integrate ongoing initiatives,” including the K2C2 process imagining the future of Kendall and Central squares and the connecting “Osborn Triangle” area. “Implementation is ongoing,” Farooq’s memo said, referring to K2C2.

With the citywide planning process coming into focus – in January, a more optimistic Farooq thought it would take “at least two years” – the priority even before Alewife is getting everything started by choosing the consultant to lead it.

The highest priority, according to the memo: “The ability to conduct a process that effectively engages the community, stakeholders, elected and appointed public officials, city staff and other professional consultants working for the city will be the highest priority.” Steps such as translation services and free child care at meetings is mentioned as just the starting point to make sure people from throughout the city are able to take part in “an inclusive and transparent process [with] robust public engagement throughout.”

With that priority in mind, the memo acknowledges that the process of seeing consultant presentations and choosing a winner happens at a problematic time – “during the summer, when some residents may not be able to attend.”

“We will record the presentations and make them available online,” the memo says.

Previous story: Officials still ‘trying to figure out’ process for a master plan, but it’ll start in Alewife

Next story: Surges in city population and construction laid out ahead of a master plan roundtable