Official city travel steers away from United after controversies over removal, leggings (update) 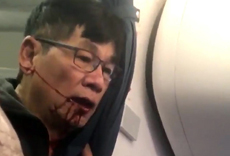 Official city travel steers away from United after controversies over removal, leggings (update)

Dr. David Dao was dragged off a United flight April 10 by police acting on airline instructions.

United Airlines stock still hasn’t recovered from the nearly $800 million hit it took after dragging a passenger off a plane April 10, a poll last week found 42 percent of millennials want to take their business elsewhere and now Cambridge may become the first city in the country to steer its own workers away from spending municipal money for United flights.

An order from Mayor E. Denise Simmons and city councillor Leland Cheung seeking to “ban all city employees from using city funds on services provided by United Airlines when alternatives exist” is on the agenda to be voted by the council Monday.

Update on April 24, 2017: The order was adopted without discussion.

“The victim was an Asian male, and the stereotype is that Asians will be submissive and unresisting. Picking the victim to be involuntarily removed from the flight could be construed as a hate crime,” says the order co-written by Cheung, who is Asian American.

The passenger is a doctor who refused to leave the plane because he had passengers to see the next day. The airline called police, who pulled the man from his seat, injuring him, and literally dragged him away down the aisle off the plane. When he was seen next, blood was streaming down his face and he was missing teeth. The incident began because United employees wanted seats on a flight that was already full.

The Cambridge order – which calls the initial apology by United’s chief executive, Oscar Munoz, “unacceptable and Orwellian” in saying the airline had to “re-accommodate” the passenger off the plane – also refers to an earlier incident, when three girls were barred from flying because they were wearing form-fitting leggings as pants. (One was allowed to board her flight after finding a way to cover her leggings.) United’s defense against accusations of sexism was that the girls were flying under “friends and family” rules, not as regular passengers.

The airline, which operates as a monopoly in many markets after a series of mergers, has had controversies in the past, including blocking its lowest-paying passengers from putting luggage in overhead compartments in 2016. It’s even had incidents before of forcing people out of their seats. In early August, it threatened to put a business flier named Geoff Fearns in handcuffs when he wouldn’t leave his first-class seat; in 2015, Nobel Prize–winning economist Robert Shiller and his wife were thrown off an overbooked flight.

“United Airlines has a history of poor service and questionable practices,” says the order by Simmons and Cheung.

A Cambridge council order three weeks ago urging an impeachment investigation of President Donald Trump passed with seven votes instead of unanimity because councillors David Maher and Tim Toomey felt it wasn’t a local issue. If they’re present for Monday’s meeting, they have a chance to respond to the framing of a national issue as one of local spending not just on United Airlines, but with Trump’s promise to build a wall between Mexico and the United States of America – Monday’s agenda also has an order proposing not to business with companies helping build the wall, so long as a second choice doesn’t result in “significant” extra cost.